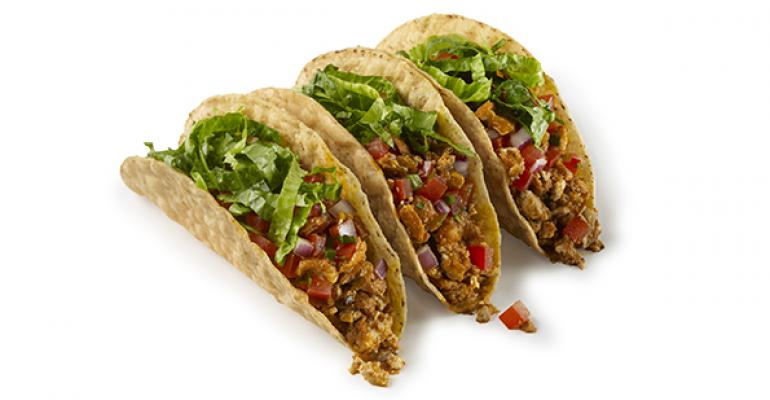 <p>Sofritas are available in a variety of menu items, including tacos.</p>
Consumer Trends

Chipotle to roll out Sofritas in 9 more states

Vegan tofu-based item to be added to permanent menu in South, Southeast

Chipotle Mexican Grill Inc. will debut next month its vegan Sofritas in nine states in the South and Southeast, opening a large new market in its yearlong rollout of the tofu-based menu item.

The Denver-based fast-casual operator said this week it would add the item on Oct. 13 at restaurants in Alabama, Arkansas, Florida, Georgia, Louisiana, North Carolina, South Carolina, Tennessee and Texas. The October rollout will also include the full state of Virginia, where some locations have tested the item already, a spokesperson said.

“We’re really excited about it. Because all of our tofu comes from one supplier … it takes some time to roll it out to all 1,700 restaurants,” Nate DeMercurio, a marketing strategist for Chipotle and himself a vegetarian, said during a preview event in Dallas.

Chipotle has registered the name Sofritas, a mix of organic shredded tofu braised with chipotle chiles, roasted poblano peppers and spices. Hodo Soy, based in the San Francisco Bay area, produces Chipotle’s Sofritas with whole-bean tofu that is organic and free of genetically modified beans, the company said.

DeMercurio said the taste was “mild to medium spice level, same as our green salsa or our barbacoa offering. It goes great in any of the same entrees you can find at Chipotle — so burritos, bowls, tacos, salads.”

Sofritas is Chipotle’s first new menu addition since it introduced salads in 2005.

“Sofritas is a very different kind of menu item, not just for Chipotle but for any fast-food or fast-casual restaurant,” Steve Ells, Chipotle founder, chairman and co-chief executive, said in a statement. “In creating the recipe for Sofritas, we wanted to produce something that would appeal to vegetarian and vegan customers, but that was delicious enough to have crossover appeal as well.”

Earlier, Ells said the item was derived from a tofu offering at sister chain ShopHouse Southeast Asian Kitchen, which has locations in the Washington, D.C., area and Los Angeles.

Chipotle plans to add Sofritas to its permanent menu across all U.S. restaurants by the end of the year.

The company also reported that second-quarter same-store sales, which increased 17.3 percent, were the highest since the company’s first quarter as a public company in 2006, when same-store sales rose 19.7 percent.

At the end of the second quarter, Chipotle had 1,681 restaurants.