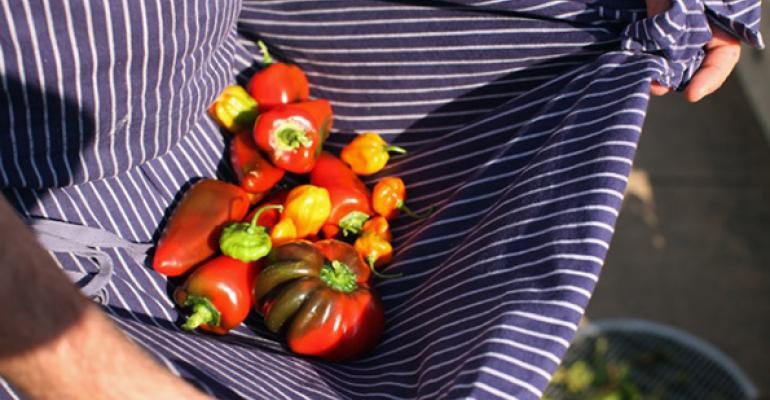 Chefs turn up the heat with lesser-known chiles

Though heat-inducing jalapeño, habanero, chipotle and Serrano peppers are fast becoming menu mainstays, some chefs are looking to turn up the flavor with less familiar varieties of chile peppers and chile oils.

According to officials at Technomic Inc., a number of lesser-known varieties of peppers are already emerging on menus and the Chicago-based market research firm predicts a trend in the making.

Eric Korsh, executive chef of North End Grill in New York City, is a big fan of ají dulce peppers, a sweet perennial pepper that grows mostly in Latin America and the Caribbean.

After finding the pepper difficult to source in the United States, Korsh began growing his own on North End’s rooftop. Korsh harvests and then pickles the ají, which preserves the pepper’s natural floral undertones and moderate smoky heat. He uses them on his Spanish mackerel crudo, along with cucumber, grapefruit, Serrano peppers and radish.

“Most peppers have one or two dimensions in terms of their flavor profile. You eat a jalapeño and you get the flavor of a jalapeño, combined with that particular type of heat, or you eat a red bell pepper and you get that flavor, but there isn’t much else going on,” Korsh said. “But the ají dulce pepper is unique because there are two or three things happening in the flavor profile that exist naturally in the chile.”

Tony Messina, sashimi chef of Uni Sashimi Bar in Boston, uses ají panca, which has a fruity, smoky flavor with lingering heat, for his mirugai, or geoduck clam, with gochujang and cucumber. Gochujang is a fermented Korean condiment made with chiles.

He also uses ají amarillo — a Peruvian chile prized for its subtle fruitiness — in his Tuna and Foie Gras Tataki with black walnuts and rhubarb.

At Besito Mexican Kitchen, which has several locations in New York, Connecticut and Massachusetts, chef Scott Wojcik uses an array of hard-to-source chiles that are true to Mexican cuisine. For example, Wojcik uses the dried pasilla chile to make authentic tortilla soup. Wojcik prefers the pasilla’s moderate heat level, as well as the raisin, licorice and plum flavors that pair well with the base of the soup.

“The pasilla adds the aromatic flavor that is essential to the dish,” Wojcik said. “We would not serve the soup if for some reason we did not have the pasilla.”

Other chefs are adding chile flavor to dishes via chile oils, a trend that Technomic predicts will likely trickle down from independents to chains in the coming year.

Among those already menuing dishes with chile oil are The Gladly, a casual bar and restaurant in Phoenix, which offers Madras Curry Pork Belly with spicy cucumber salad, coconut broth, pea tendrils, chile oil and cashews. Edmund’s Oast, a brew pub in Charleston, S.C., offers on its brunch menu a Pork Belly Pastrami sandwich with bacon-braised butter beans, polenta, sunny side farm eggs and chile oil. And at the Slurping Turtle, which has locations in Chicago and Ann Arbor, Mich., chef Takashi Yagihashi adds depth to his signature ramen with housemade chile oil.

“It is traditional to add just a little chile oil to ramen because it adds heat without masking the flavors of the broth,” Yagihashi said. “Some recipes for chile oil only use olive oil and chili flakes. My version uses half corn oil and half sesame oil so that there is a stronger aroma.”