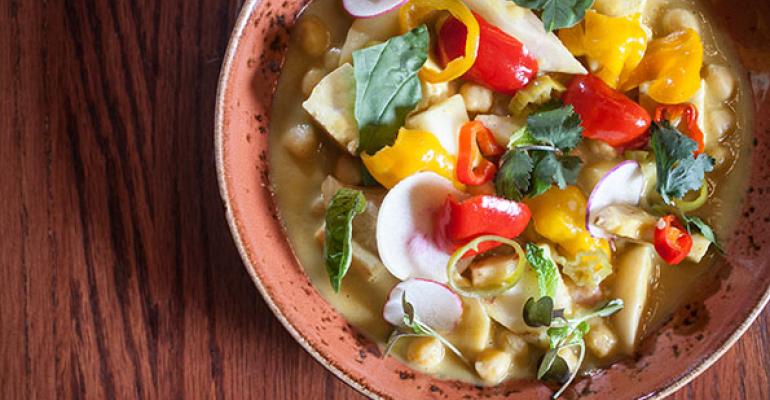 Versatile veggies to appear in variety of preparations

We may be in the thick of summer, with an abundance of seasonal vegetables ripe for the picking and menuing, but many chefs are already considering how they will use fall’s bounty of root vegetables on menus.

Among those chefs is Galen Zamarra, the executive chef and co-owner of Mas (farmhouse) and Almanac restaurants in New York City, who is known for sourcing local, seasonal ingredients and taking a stem-to-root approach to vegetables.

“I like root vegetables because they are incredibly versatile,” Zamarra said. “They can be eaten raw in a salad, fried, puréed, roasted, you name it. They also lend strong, robust flavors and colors.”

Among Zamarra’s favorite fall root vegetables is parsnip. Last fall, he made pear parsnip foam and served it with a roasted oyster dish. This fall, he plans to work with another versatile veg: sunchokes. Zamarra is considering all kinds of preparations for this species of sunflower, also known as the Jerusalem artichoke, from roasting and frying to puréeing for soups and serving raw in salads.

At Amis and Lo Spiedo, two of the Vetri Family of restaurants in Philadelphia, culinary director and partner Brad Spence likes to “stay out of the way of ingredients.”

“There’s so much sweetness in root vegetables,” Spence said. “The American palate loves sweetness. So when you roast them, people love them.”

At Amis, Spence chunks up roasted root vegetables, such as carrots, parsnips and even sweet potato, tosses them in almond pesto and serves them with Greek yogurt. And at Lo Spiedo, where all the food is cooked over a wood-burning flame, he roasts root veggies whole, marinates them, chops them into small pieces, tosses them with some roasted scallions and then serves them with romesco sauce. This fall, Spence will add thinly sliced parsnips, carrots and celery root to his staple pasta, a humble fettuccine made with bacon, pasta water, olive oil and pecorino cheese.

Also keeping root veggies simple is Nicole Pederson, chef of Found in Evanston, Ill. Pederson uses roots vegetables in her signature Turmeric and Root Vegetable Stew, made with heirloom grains, tofu and coconut milk. Pederson says the stew allows the produce to star, and the dish has become a classic among customers.

Inspired by traditional food preservation techniques and the popularity of dishes such as kimchi, Zach Meloy, executive chef and co-owner of Better Half in Atlanta, is experimenting with fermenting root vegetables.

“Most people don’t think about root vegetables when they think about fermentation,” Meloy said. “But it’s definitely starting to have its heyday.”

“I’m doing this straight up for the flavor,” Meloy said. “It’s a neat way to add a bunch of different aspects to a dish. The flavor is great and unexpected.”

This fall at Farm Burger, a locally sourced burger chain with locations in Atlanta; Ashville, N.C.; and Berkley, Calif., chef Cameron Thompson will add turnip tots with ginger aïoli to the menu. The tots are similar to traditional grated potato tater tots, but made with turnips.

“While potatoes are great, sometimes you want to do something different — something you have never done before,” Thompson said. “I like using root veggie recipes that are simple, where you can taste the flavors of the vegetable. I'm not a fan of drowning these flavors in cream, like with a gratin.”

Correction: July 14, 2015 An earlier version of this story used the incorrect title for Galen Zamarra and misspelled the city of Evanston.