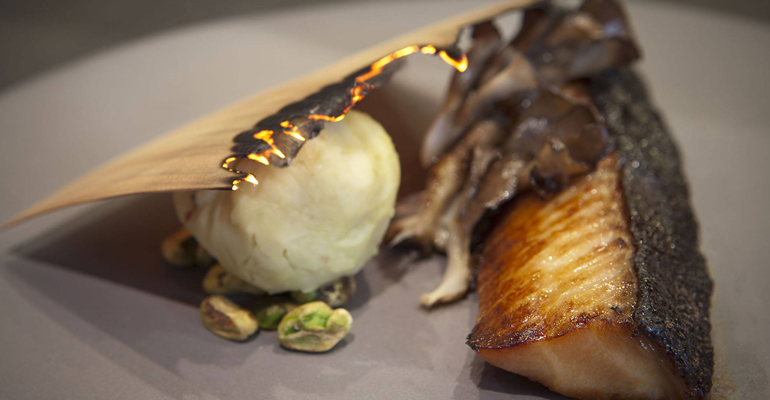 Four years ago, chef Shawn Applin had a flavor epiphany. He was smoking a whole rib eye and watching the season finale of “Sons of Anarchy” on FX Network with some chef friends when they got the idea to use smoked beef fat to make Yorkshire pudding.

Earlier this year, Applin drew on that smoky, beefy memory to create a similar dish for Outlier, a new restaurant adjacent to the Hotel Monaco in Seattle, where he is now executive chef.

“It was so delicious,” Applin said of the original dish. “I took that idea and moved it into a gougère.”

Applin's smoked beef fat gougère with Fontina cream is an appetizer at Outlier, created by making a traditional savory choux pastry, but replacing the butter with smoked beef fat, baking it and filling it with creamy Fontina. To add even more smokiness, Applin places one or more of the two-bite pastries on a marble plate covered with a glass dome and uses a smoking gun to fill the dome with cherry wood smoke. When the lid is removed tableside, it fills the room with a smoky aroma.

The gougères are priced at $2 each, and guests sometimes order a dozen or more at a time, Applin said.

“It’s really inexpensive for us, well received and easy to make, different. I don’t expect it to go away anytime soon,” he said.

Applin isn’t the only chef smitten with smoke. Chefs around country are fascinated with its potential to do more than merely cook, but to impart flavor, aroma and drama to food, and even drinks.

“Smoke is cooked air. The taste of the air is a concept with many nuances, but the smoke, as a technique and as aroma, gives us a lot of possibilities,” said chef Oscar Cabezas of Telèferic Barcelona in Walnut Creek, Calif. “For me, smoking is the way to bring the wood to the palate, the ancestral fire to our refined palates.”

In Cabezas’ dish of salmon de Navarra, he smokes Alaska salmon during the plating with cherry wood chips burning in a pipe and infusing the fish. When the dish arrives tableside, the fish and the table receive the aroma.

“We work with the technique of instant smoking not in order to cook a fish or meat, but with the intention of giving a memory to our diner,” Cabezas said. At Hinoki & the Bird in Los Angeles, chef Brandon Kida’s hinoki-scented black cod is served under a burning sheet of hinoki wood — a type of cypress found in Japan — infusing the smoked flavor just as the dish is served to the guest.

“Smoke imparts great depth of flavor and balances out the rich, fatty nature of black cod and other rich textured foods,” Kida said.

At Chicago’s Sable Kitchen & Bar, a cruciferous vegetable is imparted with smoke. Chef Shane Graybeal’s BBQ Cauliflower features a half head of the vegetable that has been smoked over applewood chips and coated with a dry rub, roasted in the oven and glazed with a housemade bourbon barbecue sauce. It is served with a Napa cabbage slaw made with cabbage, carrots, basil, cilantro, parsley and pickled carrots, topped with a dressing made with vinegar that has been smoked with mesquite.

Smoke is also wafting onto bar menus at places like Moody Tongue in Chicago, which serves a house-brewed Smoked Applewood Gold beer. Added last spring, the beer gets its flavor from smoking the barely with apple wood before brewing.

“The Smoked Applewood Gold showcases a hint of apple wood both within the aromatics and on the palate,” said Moody Tongue brewmaster Jared Rouben. “Smoke is always on our mind with the summer cooking season ahead — and this beer naturally compliments our pulled pork, brisket, sausage and the like — while refreshing our palate between bites.”

Adam Seger, mixologist at The Tuck Room at Fulton Market in New York City, uses smoke in a number of ways for cocktails. He uses smoked blood orange for a twist on the Blood and Sand cocktail, Empire Projects Smoked Gin in various infusions, and Tea Cellar Lapsang Souchong Tea, which has been smoked with pine, in tequila and bourbon infusions.

"Smoke, when paired especially with fruit, in a balanced cocktail adds another level of mystery and intrigue that creates a truly memorable guest experience,” he said.