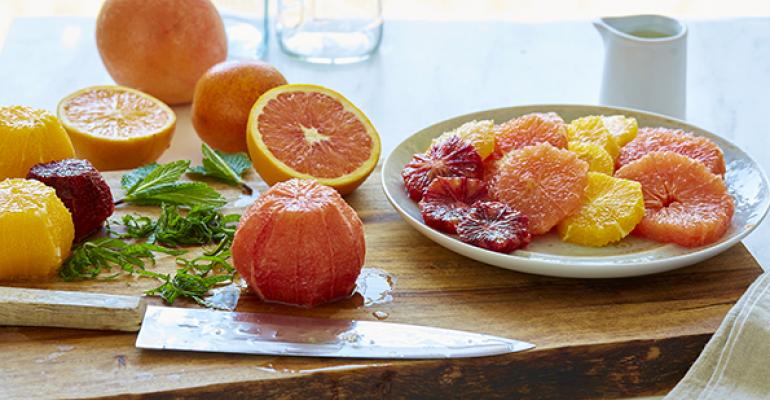 Yuzu and grapefruit grow on menus

Most diners aren’t likely familiar with yuzu, a Meyer lemon-like Japanese citrus fruit, or if they’ve heard of it they can’t describe it. And the last time many diners ate a grapefruit, they were probably ordering off the low-cal section of a menu. Yet chefs across the country are increasingly using these offbeat citrus fruits to lighten and add zing dishes of all kinds, from salads and dressings to seafood and chicken dishes.

“The use of citrus has always been around,” said chef Jonah Kim. “It just brightens everything.”

Recently, Kim used yuzu to brighten up crispy Brussels sprouts he served at the pop-up version of Yona, the Japanese- and Korean-influenced noodle bar and small plate restaurant he and chef Mike Isabella are set to open in Arlington, Va., in early December. Inspired by Outback Steakhouse’s famous Blooming Onion, Kim scores the mini-cabbages so they blossom when fried and then serves them with a sauce made of chile, yuzu and aged vinegar.

“It helps with a dish like the Brussels sprouts because they’re fried crispy,” Kim said. “Yuzu adds a nice almost sweetness. It has a very unique flavor.”

Though Kim is changing and significantly expanding the menu, he said it’s likely that the Brussels sprouts will remain on when in season, and that he will definitely incorporate yuzu in other dishes.

“I love that yuzu is really powerful, but also unassuming. It packs a good punch,” said Nashan. “If you didn’t put it on the menu as an ingredient, people would always be wondering, what is that flavor?”

At Better Half in Atlanta, a farm-to-table restaurant with a tasting menu format, owner Zach Meloy is using grapefruit to elevate traditional shrimp. For the dish, Georgia shrimp are slowly cooked in a grapefruit-infused olive oil, and then served atop a Peruvian white bean and rice cake with mixed cilantro purée and a citrus salad — made of orange, lemon and lime supremes tossed in a house-made tangerine vinegar.

“Using citrus is a great alternative to vinegar for brightening a dish,” said Meloy. “[The grapefruit oil] adds an extra citrus note to the shrimp without adding acidity. It's almost like grapefruit perfume.”

Being so close to Florida enables Meloy to easily access superior citrus this time of year and so he uses it often on his weekly changing menu. For example, he uses citrus in dishes such as a roasted duck lightly dressed in fermented orange juice and honey, and a chile lime cheese puff.

While some chefs are using these citrus fruits as ingredients, others are serving them as the main course. For example, the brunch menu at Ladybird Grove & Mess Hall in Atlanta features roasted grapefruit. The grapefruit is sliced in half and then placed facedown on a hot griddle until it becomes caramelized. On the menu just 10 months, this simple preparation has been a big hit with brunchgoers. And, the Brazilian steakhouse chain Fogo de Chão offers a Winter Citrus Salad made with sliced white, pink and ruby red grapefruits, oranges, blood oranges and tangerines topped with finely chopped mint leaves and a sprinkle of sugar.