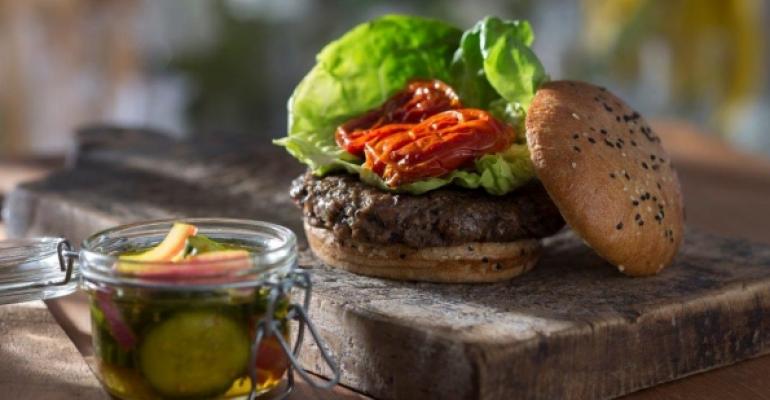 As fresh mushrooms continue to pop up on menus across the country, chefs and restaurateurs are finding that blending them with ground meat presents entirely new culinary possibilities for the earthy tasting fungus.

Menumakers say the mushroom's ability to combine with chopped proteins like beef or turkey can create burgers that are more flavorful, moister, more nutritious and have a better texture.

The trend toward combining mushrooms and ground meat has spread rapidly among noncommercial operators catering to school, college and university cafeterias. However, chains and independent restaurateurs such as Seasons 52, Applebee's Neighborhood Grill and Bar, The Cheesecake Factory, Flip Burger and Graffiti in New York also are menuing a new generation of blended burgers.

Mushroom suppliers are upbeat about the future of blending. “We've absolutely seen an increase in the past year, and we expect it to explode in 2014-2015,” says Katie Preis, marketing coordinator for the Mushroom Council. “It's a great way to amplify meat entries. All ground meat and mushrooms blend seamlessly.”

Blending also caters to an increasingly sophisticated customer base that is looking for more robust flavors. Preis expects the trend — which also lends itself to the addition of other flavor enhancers, like herbs, spices and condiments — will spill over into the retail marketplace before too long.

The movement toward blending, however, promises to put even more mushrooms on the culinary map in the future, according to industry experts. The idea to blend chopped mushrooms with meat is the result of collaboration by the Culinary Institute of America, the University of California at Davis and the U.S. mushroom industry. It was launched about two years ago when culinarians discovered that substituting a portion of chopped mushrooms for ground meat provided added volume while yielding a burger that was more flavorful, juicier and more nutritious — helping to reduce the amount of sodium, fat and calories in a typical hamburger.

And, with the cost of beef rising, blending also was seen as a way of keeping costs in line when it comes to developing new hamburger selections. In addition, chefs and operators have found that the technique lends itself to the preparation of meatballs, meatloaf, taco meat and sauces.

According to the Mushroom Council, mushrooms work well as a blendable component because they contain a high level of glutamate, a naturally occurring compound directly linked to the taste sensation know as umami. The “meaty” flavor found in mushrooms make them a perfect substitute for meat in vegetarian dishes.

Moreover, the partial substitution of chopped mushrooms for meat doesn't diminish the flavor. When meat-and-mushroom burgers were tested in school and college cafeterias, customers preferred the blended burgers. But the blendability trend also is gaining traction among commercial chain operators.

Flip Burger Boutique, an Atlanta-based concept that currently operates four outlets and has plans to open a fifth this year, was designed by its founders to showcase upscale culinary elements but packaged in a more approachable, youthful concept. Among the chain's best-selling items is Earth + Turf, a blended burger that has been on the menu for about a year. The burger contains a 50/50 mixture of beef and a chopped porcini-cremini blend. The blended patty is sprinkled with porcini powder and served with caramelized onions, sautéed mushrooms, Gruyère cheese, bread and butter pickles and mushroom mayo, and served on a brioche bun. It is priced at $14.

Calling the Earth + Turf burger “a fantastic seller,” Barry Mills, co-owner of Flip Burger, says meat and mushrooms always have combined well when it comes to taste and texture. Meanwhile, he adds, creating a burger with mushrooms and meat can reduce calorie and fat intake while adding vegetables and nutrients without sacrificing taste or portion size. “It also adds heartiness and another level of complexity in terms of its flavor profile,” he says.

Mills says the burger appeals to a broad range of customers.

Darden Restaurants' innovative Seasons 52 concept, based in Orlando, Fla., is one of the latest chains to debut a ground-beef-and-mushroom burger. The Signature Burger blends ground Angus beef with a mushroom duxelles — a classical preparation that traditionally combines chopped mushrooms, shallots and herbs — which makes for a more flavorful, juicy burger, says a spokesperson for the 38-unit chain. The burger takes inspiration, in fact, from another classical preparation, Beef Wellington, a fillet topped either with duxelles or pâté de foie gras, and then wrapped in puff pastry and baked.

Seasons 52's Signature burger is served with butterhead lettuce, roasted tomatoes and a mason jar of housemade pickles. The burger “is still new, but guest response has been extremely positive,” the spokesperson says. “It is quickly becoming one of Seasons 52's most popular lunch items.”

The dish debuted June 24 with the brand's new summer menu.

Applebee's also is getting in on the mushroom action with the recent launch of its All-In Burger platform. To prepare its Mushroom Swiss burger — one of four new selections — portabello and button mushrooms are first seared on a griddle and then a beef patty is placed on top and pressed down. The burger is served on a toasted brioche bun with a smoky mayo sauce and Swiss cheese. In addition, the line includes a Triple Bacon Burger, with bacon in the patty as well as topping it.

But operators are discovering that beef is not the only protein that can be blended with mushrooms. The 167-unit Cheesecake Factory in Calabasas Hills, Calif., features a SkinnyLicious Grilled Turkey Burger as a part of its SkinnyLicious line. The burger combines ground turkey with fresh mushrooms, garlic and spices, and is served with grilled onions, lettuce, tomato and a green salad.

“We handmake our SkinnyLicious Grilled Turkey burger patty in our restaurants,” David Overton, founder, chairman, chief executive and president of the casual dining chain said in an earlier interview. “Mushrooms pair really well with poultry — they help to accentuate the flavor of the turkey.”

Preis predicts that the blendability trend will continue to expand in the foodservice industry “as it answers operators' needs. It allows customers to eat the entries they love while reducing calories, fat and sodium without sacrificing flavor and texture.”