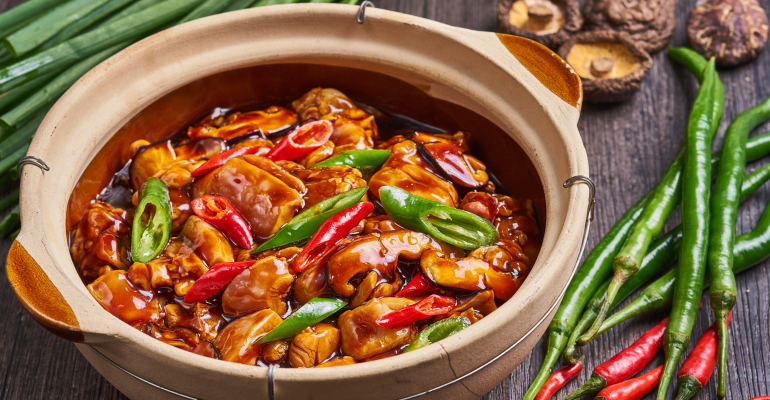 Beyond General Tso: Chinese chicken that lets the bird shine

Steamed, poached and braised dishes reveal the cuisine’s subtler side

While a lot of that is in the form of chicken Caesar salad, wings, grilled and fried chicken sandwiches, roasted chicken and fried chicken, there are plenty of other approaches that chicken is making headway in the United States, and quite a few of them have Chinese origins.

Quite apart from Chinese takeout staples such as sweet-and-fried General Tso’s Chicken — which was possibly developed in its current form in New York City — and Kung Pao Chicken, made by stir-frying diced chicken cubes with peanuts and chiles, many up-and-coming Chinese chicken dishes are subtler, and allow chicken’s actual flavor to emerge.

The name refers to the large southern Chinese island of Hainan, ancestral homeland of many of the Chinese people who emigrated to Southeast Asia in the 19th Century.

This poached chicken dish is now popular in Taiwan and much of Southeast Asia — in Thailand it’s called Khao Man Gai, or fat rice chicken.

“There’s like five different people opening places [in Los Angeles] right now,” said David Kuo, chef and owner of Taiwanese restaurant Little Fatty in Los Angeles, which draws customers from throughout the city for its version of Hainanese chicken rice. 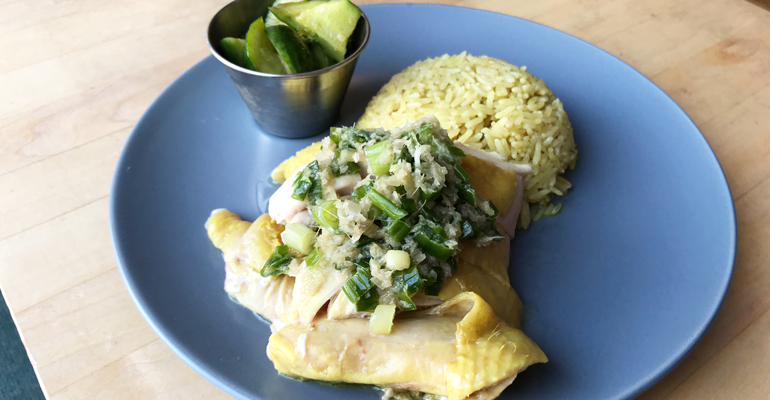 Kuo uses dark meat chicken, which he brines for 24 hours in salt and sugar. Then he takes a Chinese chicken stock flavored with ginger, garlic, green and regular onions and carrots, and augments it into a Hainan chicken broth by adding more salt, turmeric, shallots, pandan leaf, bay leaf, ginger, garlic and a little clove.

He brings that to a boil, adds the leg quarters, covers it and takes it off the stove to let it poach gently for 30 minutes. He debones it to order, slices it and serves it with “chicken fat rice.”

That’s made by sautéing the same ingredients used to flavor the chicken broth — shallots, ginger, garlic, bay leaves and pandan — in chicken fat. Then he adds the rice and toasts it, similarly to rice pilaf, and then puts it all in a rice cooker with the Hainan chicken broth and more pandan leaves, “so it’s really floral and savory from the chicken schmaltz and the aromatics,” he said.

“It’s what brings everything together,” he said.

Xiaolu Yang has built a restaurant empire from his family’s chicken recipe, which originated in Jinan, capital of the province of Shandong in eastern China, between Beijing and Shanghai. 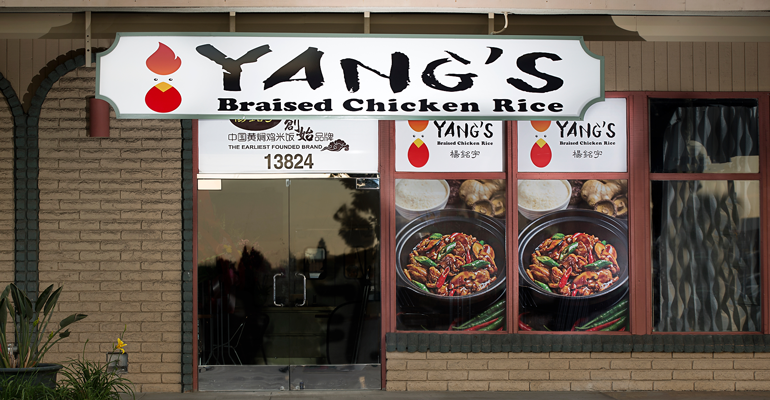 He traces the recipe for his version of so-called Huang Men chicken to his great-grandmother, who passed it on to her daughter who passed it on to Yang, who is now the head of Yang’s Braised Chicken Rice with 6,000 locations. Most of those restaurants, which only serve that single dish, are in China, but the chain also operates in Australia, Malaysia, Japan, Thailand and Singapore. Starting last year, Yang’s Braised Chicken Rice is now also in the United States with a unit in Tustin, Calif. The chain recently signed a deal to open three new California locations in Lake Forest, Santa Ana and Aliso Viejo.

Yang’s specific recipe is proprietary, but other recipes for Huang Men, which means “yellow stew,” chicken include spices such as star anise and cardamom, as well as soy sauce, and sometimes scallion or celery. Those recipes usually are made using a whole chicken cut into pieces, bones and all, but Yang's restaurants use boneless chicken thigh, cut into bite-sized pieces, braised in the chain’s sauce along with mushrooms and ginger.

“The mushrooms give an extra flavor to the dish, and the ginger adds balance and helps to create a sense of freshness,” vice president Eriko Zhao said.

The chicken is braised in bulk in advance at the restaurants in large pots and then is transferred to clay pots — the dish’s traditional cooking vessel — where chile is added for customers who request it. The dish is available in three flavors: Regular, which has no chile, Authentic, which has sliced serrano pepper added, and Spicy, which has dried chile powder as well as serranos. 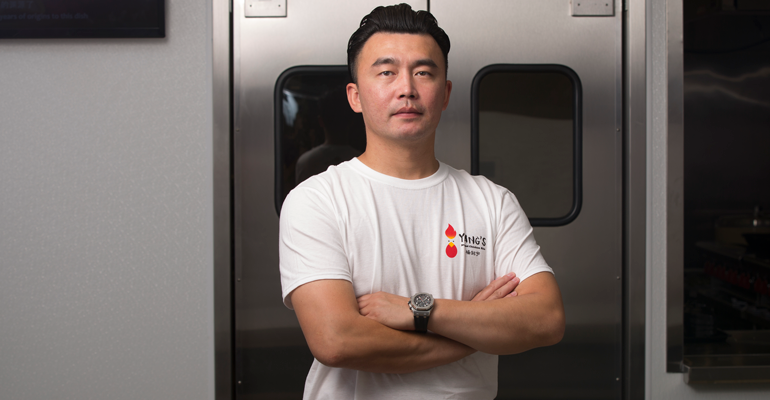 A lot of American customers like it spicy," said Xinyu Zhang, CEO for the U.S. division of Yang's Braised Chicken Rice.

The dishes are finished to order in the clay pots, cooked on a stovetop, in around five minutes.

It’s served with a short-grain rice called Dongbei Dami, which means “northwestern rice,” and indicates that it probably originated in the Chinese region of Manchuria. Zhang said it’s firmer than most other types of rice.

“I definitely like uncommon preparations, because chicken is pretty common,” said Abe Conlon, chef of Fat Rice, a restaurant in Chicago focusing on the cuisine of Macau and other parts of Asia with heavy Portuguese influence.

Macau, an island off the coast of southern China, was a Portuguese colony from the 16th Century until it was returned to mainland China in 1999.

A dish that was on the opening menu of Fat Rice, and that Conlon is serving through the end of October during his stint at Chefs Club in New York City, is Po Kok Gai, which is Cantonese dialect for “Portuguese chicken.”

“It’s braised thighs in coconut milk and it has potatoes, chorizo, tomato, olives and hard-boiled eggs. We put cheese on top, but not everyone does. That’s a delicious thing,” Conlon said.

He starts by marinating the thighs in Chinese cooking wine, ginger and scallions. He rubs it with curry powder, bakes it in a shallow pan, debones it and cuts it into bite-sized pieces.

Then he layers it in a casserole dish with boiled potatoes and covers it with the chicken drippings, coconut milk and more curry powder. Then he slices “slightly dehydrated tomatoes,” Spanish or Portuguese chorizo — as opposed to the Mexican variety — and hard-boiled eggs. He sprinkles it with São Jorge cheese and breadcrumbs, finishes it in the oven and tops it with black olives.

This dish hasn’t made much of a splash in the United States, but it’s a signature at Crystal Jade La Mian Xiao Long Bao, a 15-unit chain in Hong Kong that specializes in hand-pulled noodles (la mian) and soup dumplings (xiao long bao).

The dish is made by sealing chicken with herbs and spices in a covered ceramic jar and then steaming it for several hours, resulting in a soup composed mostly from the chicken’s own juices “making for a rich, concentrated broth and fall-off-the-bone chicken,” according to a restaurant spokesperson. It’s served as a side dish to the pulled noodles. 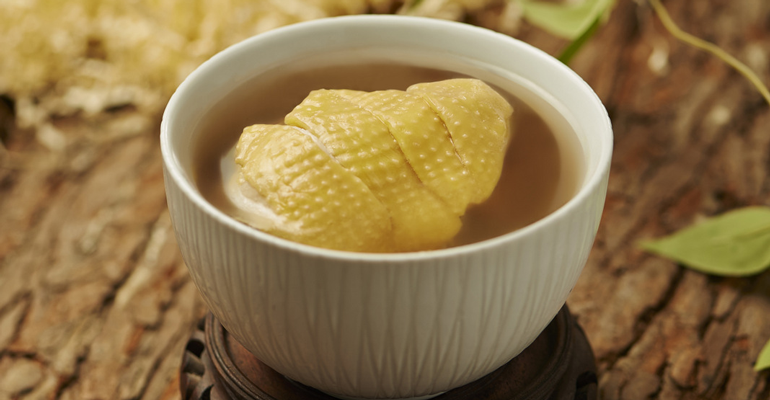 The spokesperson didn’t say what herbs and spices are used, but it can vary considerably from one recipe to the next. Eileen Yin-Fei Lo, writing about the dish for Food & Wine magazine in 1999, used dates and goji berries, while the online publication Lucky Rice, writing about it last year, used ginger, scallions and Shaoxing wine.

Other recipes also include some water or other liquid, such as rice wine, to be cooked with the chicken in a sealed pot.

Aug. 27, 2018: An earlier version of this story misidentified Xinyu Zhang as founder of Yang's Braised Chicken Rice, which was founded by Xiaolu Yang. Zhang is president of the chain's U.S. division.