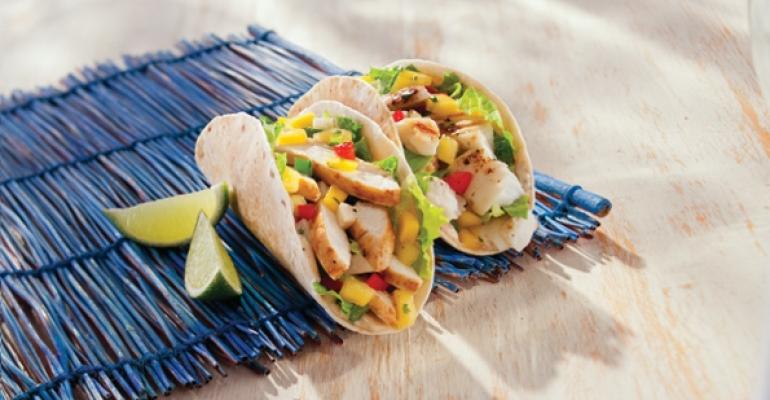 Tropical Smoothie Café's Tropical Tacos are topped with a signature Caribbean salsa, made with pineapple, jícama, red peppers and cilantro, as well as mango and jalapeño peppers.
What's Hot

Restaurant chains put pineapple, mango and other tropical fruits in food and drinks.

The flavors of the tropics are continuing to grow in popularity at restaurant chains — particularly tropical fruits, which seem to give guests a sense of adventure and novelty in the safe, generally sweet guise of fruit.

Although chain customers are being treated to a fair amount of coconut, mango and passion fruit, and even a little bit of guava here and there, pineapple remains one of the more popular tropical fruits on U.S. menus.

Pineapple and fish also come together with P.F. Chang’s Grilled Pineapple-Citrus Swordfish, served with a mix of rice and summer vegetables and topped with daikon sprouts.

Pineapple can also be found in a lot of cocktails, particularly those made with rum. That includes The Melting Pot’s Sailor Chic, made with spiced rum, pineapple juice, orange juice and blackberry syrup, topped with club soda.

Many pineapple cocktails also include coconut, such as Red Robin’s Tropical Watermelon Punch, made with Malibu coconut rum and Grand Marnier shaken with muddled watermelon, citrus and pineapple juices, and grenadine. The drink is topped with shaved coconut and fresh watermelon.

Rosa Mexicano’s Papaya-Pineapple Punch is made with Mt. Gay rum and Cointreau, along with Cava and fresh papaya, pineapple, star fruit and lime. It’s served with coconut-water ice in a bowl that serves 4 to 6 people.

The classic pineapple-coconut cocktail is the Piña Colada, a frozen drink that combines those two fruits with the most tropical of spirits, rum. Three chains recently introduced virgin variations on that treat, starting with Pinkberry, which rolled out a Pineapple Coconut smoothie made with its new line of Greek yogurt.

Baskin-Robbins turned the Piña Colada into dessert as part of a new no-sugar-added lineup that includes coconut flavored ice cream studded with chunks of pineapple, and Jack in the Box added a Piña Colada Smoothie to its Real Fruit Smoothie lineup, which also includes strawberry, strawberry-banana, and another tropical flavor — mango.

Mango in food and drinks

Mango is also appearing in a variety of drinks, including Wienerschnitzel’s Summer Sippers — a lemonade line made available this summer in strawberry, cherry and blackberry flavors as well as mango.

But most mango applications at chains this year have been in savory dishes, such as P.F. Chang’s new Peking Summer Rolls, made with roasted duck, julienne green papaya, snow peas and carrots wrapped in cool rice paper and served with a mango-jalapeño vinaigrette.

Tropical Smoothie Café's new Tropical Tacos — a choice of grilled tilapia or grilled chicken with chile lime cilantro spread and romaine lettuce in toasted flour tortillas — are topped with a signature Caribbean salsa, made with pineapple, jícama, red peppers and cilantro, as well as mangos and jalapeño peppers.

El Pollo Loco is using a mango salsa on its new Baja Shrimp Grande Taco, which also comes with shredded cabbage, creamy cilantro dressing and sliced avocado, as well as its new Baja Shrimp Tostada Salad, which has the same marinated, grilled shrimp that’s used in the tacos, along with Spanish rice, pinto beans, romaine lettuce, avocado, cilantro, citrus vinaigrette and mango salsa, all in a crispy tostada shell.

Another Pollo Loco variation on that theme is its Citrus Mango Tostada Salad, introduced this summer for a limited time, which is made with its signature citrus-marinated grilled chicken, mango salsa, mango slices, sliced avocado, rice, pinto beans, romaine lettuce and chopped cilantro in a tostada shell with low-fat citrus vinaigrette.

It’s unclear what tropical fruit will be the next trend on the horizon. Lychee has long been a popular fruit in martinis at independent restaurants, and mangosteen has found a following in high-end juice bars. But Jamba Juice recently added two items that include the fruits of the coffee plant that grow around coffee beans, which Jamba Juice is calling Kona Berries.

The Kona Berry Blast Smoothie is made with a beverage derived from dried coffee fruit and other juices along with pineapple juice, soy milk, raspberry sherbet, strawberries blueberries and the chain’s Charger Boost. The Kona Berry Blast Bowl is made with that same coffee-fruit-based beverage, soy milk, bananas, strawberries and blueberries topped with organic granola and banana slices.