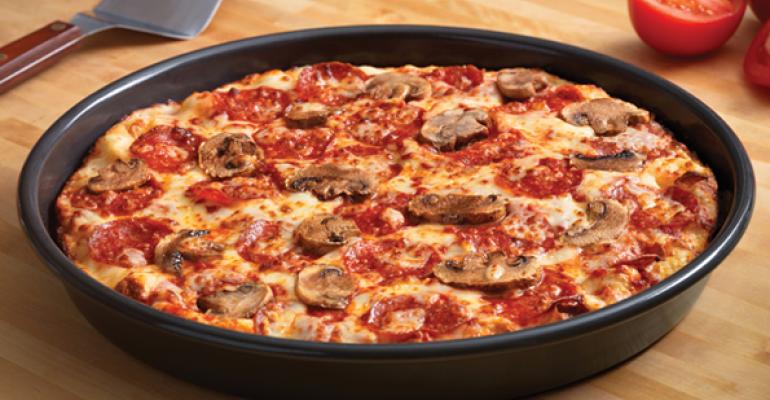 Restaurants’ new dishes ran the gamut in 2012, as chains worked to keep their core customers engaged while also branching out to entice new ones. The result: A wide variety of dishes that showcase premium ingredients, indulgent comfort foods, healthful dishes, affordable proteins and exotic flavors.

Starbucks tried to expand its appeal over the course of the year, first with the introduction of a “blonde” roast of coffee at the beginning of the year, for people who prefer lighter brews, followed in the summer by a line of Refreshers — fruity energy drinks in Very Berry and Cool Lime flavors that got an extra kick from a flavorless coffee extract — for people who didn’t like coffee at all.

Taco Bell went after a more premium demographic with its introduction of the Cantina Bell line of burritos, bowls and the like that retailed for around $5 each and was promoted by celebrity chef Lorena Garcia. More successfully, it aimed for the heart of its 18-34-year-old male demographic with its smash hit Doritos Locos Tacos line, that served its signature taco meat in a shell made of the beloved snack chip. More than 200 million of the tacos have reportedly been sold.

Toward the end of the year, as Taco Bell began testing Cool Ranch and spicy “Flamas” versions of the Doritos Locos Tacos, it also introduced two new desserts — 99-cent churros and a $1.29 chocolate chip cookie sandwich filled with vanilla cream. It also expanded its new Cantina Bell line with items including XXL Steak Nachos with a triple portion of Garcia’s braised steak.

Rubio’s Fresh Mexican Grill, which popularized the fish taco in the United States, introduced a sesame soy beer-battered version as well as an avocado corn fish taco, also made with beer-battered pollock, but topped with avocado corn salsa and creamy chipotle sauce. 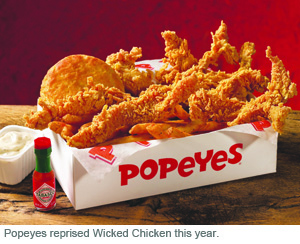 Popeyes Louisiana Chicken reprised its award-winning Wicked Chicken, but added a creamy garlic, pepper and Parmesan dipping sauce to go with it.

Dunkin’ Donuts added to its line of bakery sandwiches with a ham & cheese; a turkey, Cheddar & bacon; a chicken salad; and a tuna salad.

Jack in the Box, meanwhile, tried a BLT cheeseburger as a limited-time offering in February, while in November Burger King began testing new versions of its signature Whopper line.

That was the last in a slew of new offerings at the No. 2 quick-service burger chain, which earlier in the year announced the biggest menu revamp in its history with three new salads, chicken snack wraps in two flavors, and two fruit smoothies, as well as new frappes and improved chicken crispy strips with fairly radical sauces, such as kung pao and roasted jalapeño barbecue.

It was a big year for chicken generally, particularly chicken breast as wing prices skyrocketed and the cost of beef also rose. 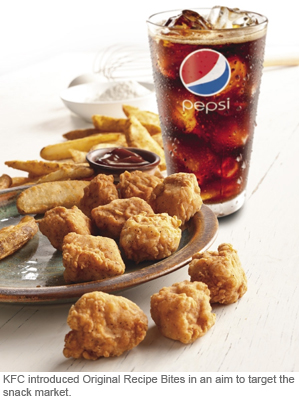 Culver’s featured crispy chicken tenders in its new Asian Crunch Salad this fall, and Pei Wei made use of the popularity of a Thai hot sauce with its Sriracha Chicken.

Red Robin also added Sriracha to its menu with a spicy burger called The Cry Baby.

Cracker Barrel launched a sides-only meal option in the fall, as well as such seasonal dishes as apple cider-glazed pork roast for dinner and apple streusel French toast for breakfast, as well as a pumpkin custard and gingersnap dessert.

Also taking a lighter approach, Taco Bueno and Boston Market both introduced customizable bowls of food — Bueno Bowls and Market Bowls, respectively — as did Taco Bell as part of their Cantina Bell line. They joined Chipotle, Freshii, KFC, and Pollo Tropical in this growing food category.

Domino’s continued to promote its higher-quality food. Its 2011 launch of Artisan Pizza was followed in 2012 by pan pizza made with fresh, never-frozen dough.

Those items joined the Double Barrel Whisky Sirloin that was added last year.

The casual-dining giant also went out of its comfort zone with items like a fried green tomato and turkey club with basil pesto mayonnaise. It also introduced a roast beef, bacon and mushroom melt, as well as a chicken chopped salad in which the chicken was glazed in a version of the South American herb vinaigrette chimichurri.

Dunkin’ Donuts went outside of its usual box, too, with sun-dried tomato and pumpernickel bagels as limited-time offerings.

And Bruegger’s tested its limits with new items including a Mediterranean Mozzarella salad that had toasted almonds, roasted red peppers and Catalonian Romesco dressing — a mixture of tomatoes, red peppers, onion, garlic, almonds and olive oil. 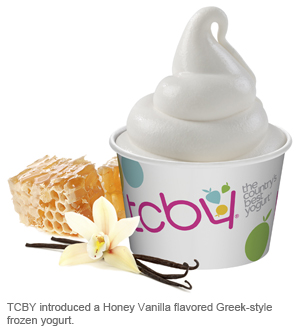 hick, tangy Greek yogurt gained popularity among consumers this year, and several treat chains got in on the action. Pinkberry, TCBY and Ben and Jerry’s all entered a new category with the introduction of Greek yogurt flavors. Meanwhile, Dairy Queen finally made use of its 1987 purchase of the Orange Julius chain with the announcement of plans to offer smoothies under that brand’s moniker systemwide by early 2013. Cold Stone Creamery launched a catering program with hand-held novelties such as Oreo canapés, miniature ice cream cones and cake bites.