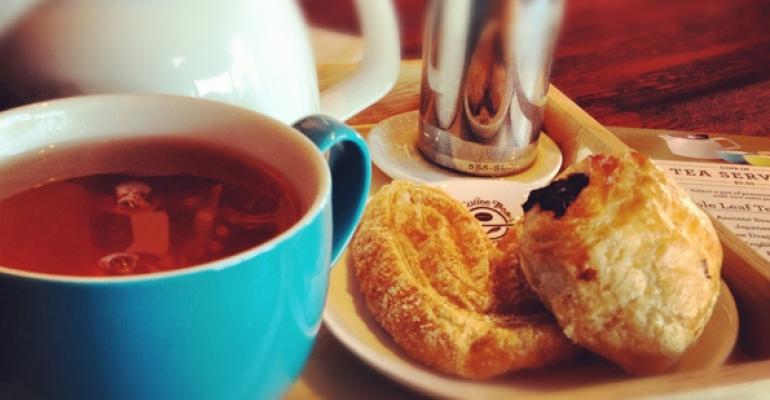 Just as consumers are moving away from mainstream beer to microbrews and from commodity coffee to premium varieties, when it comes to tea, the more specialized the better, said David DeCandia, director of tea at the 850-unit Coffee Bean & Tea Leaf chain.

In fact, the interest in the healthful attributes of tea, particularly green tea, that industry watchers say have helped drive growth in the beverage’s popularity in recent years, has been replaced by a focus on the tea itself. “The discussions of green tea’s health benefits aren’t as prominent as they used to be,” said DeCandia, who over the past 17 years has seen tea grow from 1 percent of the chain’s sales mix to about 20 percent now.

“The growth is really in the orthodox specialty teas. Like wines and specialty beers and cigars and all that jazz, people are really digging the fact that tea can be grown in a certain area and a certain elevation and in a certain field,” and have different taste qualities as a result, he said. “That’s what people are really striving for. They want to see a special [tea] that’s gone through an enormous amount of steps and is only made a certain time of year. That appeals to them.”

“We’re finding that customers are saying, ‘Yeah, I like that first flush Darjeeling.’” He added.

That interest has allowed him to offer single-estate teas from Sri Lanka, Ah Li mountain tea from Taiwan and other premium brews that customers can’t find elsewhere.

In part to see if that interest in finer teas might also contribute to a lifestyle change, about a year ago DeCandia introduced tableside tea service at 10 Los Angeles area locations.

“I do a lot of traveling for the company, and I spend a lot of time drinking tea, and over the years I realized that tea was more than just a beverage. It was an opportunity to spend time with people and share ideas.

“I think now people have reached the point where not everything needs to be quick service, push-of-the-button, on the go,” he said, adding that, by presenting people with a tea pot, a couple of pastries and ceramic cups rather than paper or plastic, “it gives people the opportunity to take time and sit down instead of rushing.”

That might seem antithetical to the multitasking lifestyle of convenience-focused urban Americans, but it is on-trend with consumers who are buying better coffee — a fact so widespread that Burger King has announced plans to introduce espresso drinks in March — upgrading to the more premium beverage offerings of “better burger” chains such as Five Guys and Smashburger, and exploring a wider range of beer and wine.

Although the year-old tableside tea program was slow to take off, DeCandia said it has started to grow in popularity among certain groups. “Early morning, it’s tough, because everyone has someplace to go, but and older crowd comes in at around 11 or 12 and has the tableside service,” he said.

In the evenings, especially with the unusually cool weather in Southern California this winter, customers have been taking a half hour or an hour in the evenings to warm up with a pot of tea, DeCandia added.

“It’s a little bit more upscale, it’s a different experience, and it makes the tea taste better,” he said, especially since the tea comes with a timer, and the server instructs the guests how long to wait before pouring. “You’re virtually guaranteed the perfect cup of tea.”

DeCandia’s next move is to introduce tea “cappuccino” later this year. The drink is made by steaming a grade of tea called broken orange pekoe in an espresso machine set aside for that purpose. Then, steamed milk and froth are added along with one of the flavored powders that usually go in the chain’s iced blended drinks. The drink will be available in three varieties — Scottish Breakfast, Chai and Anniversary Blend — for $3.50 per 12-ounce serving.

He said that, although cappuccino’s not a typical application for tea, “Tea needs to be sexy. It needs to be there in every sort of way that coffee is. It shouldn’t be coffee’s red-headed step child.

“[Some consumers] really like the experience of a barista making the beverage and spooning the [foam] on top.”