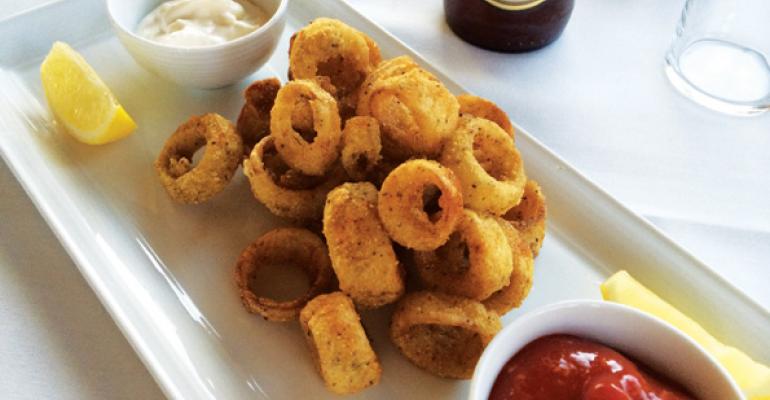 Items such as Brussels sprouts, oysters, pickles, squid and octopus may be gaining wider appeal after hitting the fryer.

Some once unpopular foods are making it onto trend lists these days. Brussels sprouts and oysters have become the darlings of food hipsters, and formerly polarizing items, like pickles, squid and octopus, are gaining wider appeal.

Kirstyn Brewer, chef of Victor Tango in Dallas, has found that oysters also move better if you fry them.

“I think people like the idea of eating oysters; it makes people feel like they’re being adventurous,” she said. “But it’s a lot easier eating them fried than eating them raw.”

Just as vegetable-based fried items are becoming more popular on U.S. menus, many iconic fried items are disappearing, according to Datassential. The menu research firm found that such items as breaded mushrooms, cheese sticks, poppers, fried shrimp and fried chicken strips were found on fewer menus at the end of 2013 than they were in 2009.

Among the chains pushing fried-pickle limited-time offers in the past year are Lone Star Steakhouse, based in Plano, Texas; Eat ’n Park, a family-dining chain based in the Pittsburgh area; and Cheeburger Cheeburger of Fort Myers, Fla. Fried pickles also are a permanent side dish at Umami Burger, a chain based in Los Angeles, where fried pickles were once a non-starter.

“Who doesn’t love a pickle? Who doesn’t love something fried? Who doesn’t love the two together?” asked Jim Doak, vice president of menu innovation and corporate executive chef of Houston-based Ignite Restaurant Group, parent of the Joe’s Crab Shack casual-dining brand, among others. Joe’s recently reintroduced its fried pickle after a hiatus of several months as Doak worked to change the 136-unit chain’s frying platform.

“It’s a less processed blend of herbs, spices and flours; it doesn’t have a lot of other junk in it,” Doak said, adding that the clean breading mix allowed the flavors of whatever item is being fried to shine through.

The revamped fried pickles are dusted in a seasoned flour blend, fried to order and served with two sauces — ranch dressing and a Sriracha rémoulade — as part of Joe’s new Southern Sampler, which also features shrimp toast and crab fritters for $10.99.

“We wanted to introduce another non-seafood appetizer to our menu to provide more options for non-seafood eaters,” said a spokeswoman for the 705-unit casual-dining chain, which is owned by Darden Restaurants Inc. “For the sauce, we use ingredients that not only heat up your taste buds, but have flavor as well. Consumers’ palates are looking for flavor and heat now more than ever.”

Fried calamari continues to grow in popularity and was on 3 percent more menus at the end of 2013 than in 2009. The presence of fried oysters on menus is flat compared to four years ago, but chefs report that when the item is available, it sells extremely well. 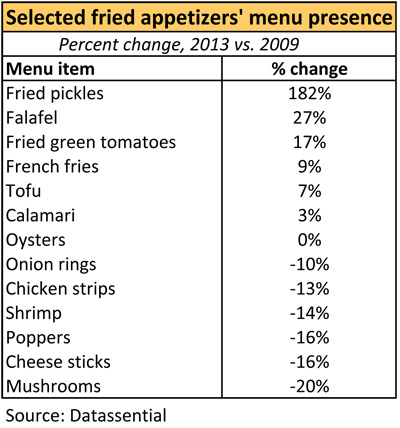 At Victor Tango, Brewer shucks Blue Point oysters to order, dipping them in batter with cornstarch, flour and a little cornmeal, deep fries them and serves them five on a plate with miso butter, grapefruit sections and local mizuna lettuce for $15.

Sheila Lucero, executive chef of four-unit Jax Fish House & Oyster Bar in Denver, makes chicken-fried oysters by soaking them in buttermilk, dredging them in seasoned flour and frying them until crispy. She serves them with smoked tomato jus and warm andouille sausage for $3.75 each.

“Hot and quick” is the way to fry an oyster, said Rick Tramonto, chef-partner of R’Evolution in New Orleans, where he makes a Cajun fried oyster salad. He dips the oysters in buttermilk and then in a mixture of Wondra flour and cornmeal, and fries them quickly.

“So the crust is crunchy and the inside is still creamy,” Tramonto said, noting that simple seasoning, such as pepper and lemon, generally does the trick. He does not add too much salt, since the oysters are already briny.

Tramonto’s dish is inspired by the chopped salads he used to make in Chicago — with blue cheese, egg, cucumber, tomato and bacon. For a New Orleans touch, he uses the fried oysters instead of croutons.
The salad is $11.

At Max’s Wine Dive, the “oyster nachos” are popular. Russell breads shucked Gulf oysters in seasoned cornmeal; deep fries them for 30 seconds in the hot fryer; and serves them with wonton crisps, garlic aïoli and habanero salsa for $9.50 for half a dozen, or $18 for a dozen.

The chain’s chicken-fried Brussels sprouts also are popular, although it took Russell a few tries to perfect the process.

To make them, he trims the sprouts’ leaves, scores them so they absorb more marinade and then soaks them for at least a day in a buttermilk marinade with dried jalapeño peppers and other seasonings. Then he dredges them in seasoned flour and fries them for about three minutes at 250° Fahrenheit. Next, he moves them to a 350° Fahrenheit fryer for the final minute.

He learned that frying method the hard way. He first tried dropping them directly into the hot fryer.

“Some of them exploded and shot oil three feet in the air. … I burned the crap out of my arm,” he said.

Russell previously served the Brussels sprouts with port-glazed onions, lemon confit and ham-infused vinegar — made by putting ham in the vinegar starter. He currently serves them with a romesco sauce and Parmesan cheese. They’re $12 per order.

Paul Holzheimer, co-chef of Pascal & Sabine, a new restaurant in Asbury Park, N.J., uses a similar approach for his fried baby artichokes, although for a different reason.

He said that par-cooking the artichokes at a low temperature allows him to hold them without rubbing them with lemon water to keep them from discoloring. Then at service, he fries them at a high temperature and serves them with lemon, herbs and anchovy bread sauce for $12.

At Crossroads, a vegan restaurant in Los Angeles, chef Tal Ronnen makes a dish similar to fried calamari using hearts of palm instead of squid.

He cuts the hearts of palm into rings, coats it in seasoned chickpea flour and fries them at 350° Fahrenheit for three to four minutes. He serves them with cocktail sauce and lemon-caper aïoli for $12.