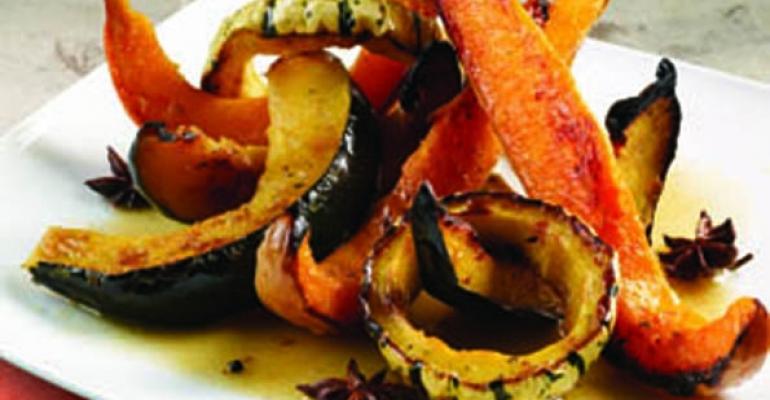 Seasons 52, Maggiano’s, Red Lobster and more are incorporating the season's harvest into dishes

While pumpkin is often considered the go-to flavor on fall restaurant menus, other seasonal vegetables get special treatment in a variety dishes in the months leading up to winter.

From beets and sweet potatoes to a variety of squashes, the penetration of fall vegetables on restaurant menus has seen a significant increase in the past four years, according to market research firm Datassential MenuTrends. More specifically, Brussels sprouts, kale and spaghetti squash showed substantial growth from 2011 to 2012, increasing their penetration on menus by 44.4 percent, 50 percent and 16.7 percent, respectively, Datassential found.

Those figures were echoed by Clifford Pleau, senior director of culinary at Seasons 52, the Darden Restaurants Inc. brand that features a menu that changes quarterly and highlights seasonal ingredients.

“The most popular vegetables for the autumn season include squash varieties, mushrooms, root vegetables and Brussels sprouts,” Pleau said.

In the Roasted Squash Trio appetizer, Pleau highlights the popular vegetable with a Thai chili mint glaze, part of a three-part approach to making fall vegetables attractive to the restaurant’s customers. “First, we make something familiar in a way that is simple but is off the chart with flavor,” he explained. “Next, we use vegetables that our guests are more reluctant to make at home. Last, we strive to make it exotic or differentiated with ingredients and cooking methods.”

In addition to Seasons 52, several other restaurant chains are incorporating fall vegetables onto their menus. Red Lobster recently introduced a tilapia dish with roasted vegetables, Maggiano’s rolled out Butternut Squash Ravioli, and LongHorn Steakhouse is offering Sweet Potato Bites, to name a few.

Dallas-based Romano’s Macaroni Grill is also taking advantage of the increasing popularity of fall vegetables with the return of its limited-time fall menu, which includes dishes like Butternut Asiago Torellaci—four-cheese stuffed pasta, roasted butternut squash, crispy prosciutto, truffle cream and pumpkin seeds—and Roasted Beet and Goat Cheese Crostini. The casual-dining Italian chain has been promoting the menu with a new television campaign that encourages consumers to try new things during the longer nights that come with the fall season.

But while full-service brands seem to be the more inclined to introduce more vegetable-focused, seasonal menus, the overall consumption of vegetables is distributed relatively evenly across all segments, according to market research firm The NPD Group. In 2011, 36 percent of vegetables servings were ordered at midscale or family-dining restaurants, 33 percent were at casual-dining restaurants and 32 percent were at quick-service restaurants, The NPD Group found.

Regardless of where they are being ordered or consumed, however, restaurants strive to use the seasonal ingredients in a way that makes them interesting to consumers.

“We try to prepare them simply, but in a way that makes them craveable,” Pleau of Seasons 52 said. “This will provoke a positive response with our guest who can’t wait to try them again.”