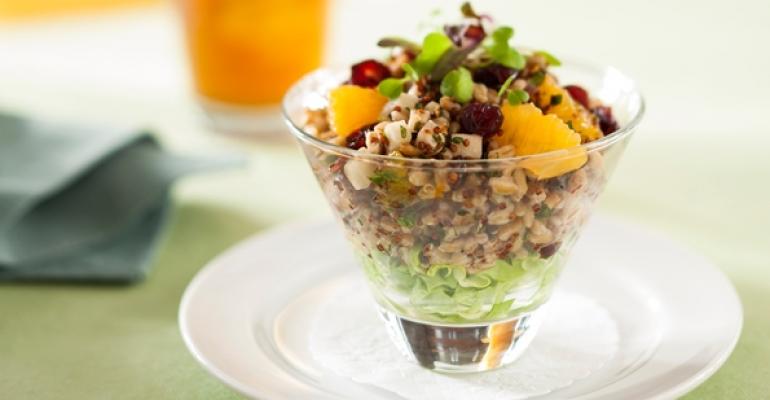 The high-protein, gluten-free grain is becoming a popular ingredient used by a wide variety of restaurants.

Once the province of high-end chefs and health-food restaurants, this high-protein, gluten-free grain from the Andes Mountains has become a go-to ingredient for restaurateurs looking to satisfy a variety of different consumer needs.

Katie Adair Barnhart, owner of Adair Kitchen in Houston, said the seed’s high protein content gives it appeal to vegetarians looking to supplement their diets as well as to fans of lean protein who “have chickened out.”

She adds boiled and unseasoned quinoa to a salad of finely shredded kale, Parmesan cheese, dried unsweetened cranberries, feta cheese and sliced almonds tossed in a dressing of lemon and olive oil. The dish is $9.95, and Adair said she’s surprised by how well it's selling.

Chris Tomasso, chief marketing officer of First Watch, also was surprised at the success of the Quinoa Power Bowl that was introduced this past winter as a limited-time offering at the 105-unit breakfast-and-lunch chain.

The $8.29 dish is made with chicken, kale, carrots and house-roasted tomatoes. The Quinoa Power Bowl quickly became the chain’s top-selling lunch item, so First Watch held it over as part of its spring LTO lineup.

Seasons 52 also has brought quinoa back to its menu this spring as a side salad mixed with jícama, mint and cranberries for $3.29.

The rollout of the item marks the first time the Orlando, Fla.-based Darden Restaurants subsidiary has offered quinoa in a standalone dish, although a quinoa salad in some form or another has been part of its vegetarian tasting menu since last summer.

However, the 33-unit chain didn’t start using the grain's actual name on the menu until this past winter. When it first started offering quinoa last summer, Seasons 52 called it “grains of life,” since it wasn't yet well known to consumers.

At Paiche, a new restaurant Zarate is opening this week [April 12] in Marina del Rey, Calif., he is boiling quinoa and then toasting half of it for textural contrast, and then combining it with sautéed mushrooms and mushroom mousse.

For Zarate to say that his customers, Angelinos eating in Peruvian restaurants, are familiar with quinoa is one thing.  But for Tomasso to say that First Watch customers are quickly growing accustomed to it is entirely another — signaling a more widespread acceptance of the grain.

“We have been blown away by the response to it, “ he said — so blown away, in fact, that Tomasso’s team started interviewing customers about why they were ordering it.

“Quinoa is obviously growing in popularity, but it’s also a little bit of an enigma to mainstream customers,” Tomasso said he found; his customers told him that they probably wouldn’t try it at home, but they trusted that First Watch wouldn’t offer them something that wasn’t good.

He said he brought friends into the restaurant who at first couldn’t pronounce it (it’s pronounced KEEN-wah) and who now order it regularly.

Gordon Biersch Brewery Restaurants added a kale-quinoa pilaf to the menus at its 34 restaurants earlier this year. Corporate executive chef Bill Heckler said the dish is out-performing the sweet ginger rice that it replaced.

“We’ve had nothing but raves, really,” He said. “It’s a nice change from having just a huge pile of starch on the plate.”

For the dish, quinoa is blanched and then cooked until the grains split, about 20 minutes. Then it’s drained and mixed with a julienne of raw kale and dried cranberries and tossed with a miso vinaigrette. It’s chilled, and heated to room temperature just before it's served.

Rob Newton, chef of Seersucker, in Brooklyn, N.Y., said among his customers, quinoa “is kind of where kale is. It’s healthy, it tastes good, it’s very good for you.”

Newton uses black quinoa from Colorado for his $12 salad. He cooks it in a rice cooker and tosses it in a vinaigrette of brown butter, mustard, vinegar and oil with toasted pecans. The salad also has roasted baby carrots and a poached egg.

Quinoa is also being used as a supplement to fritters and pancakes these days. Mary Sue Milliken, for example, won a contest on Top Chef Masters with her quinoa fritters.

The item is available at all three of her and Susan Feniger’s Border Grill locations — in Downtown Los Angeles; Santa Monica, Calif.; and at the Mandalay Bat Resort in Las Vegas — for $10.

For that dish she toasts raw quinoa for a few minutes in a dry pan and then simmers it in double the volume of water until the water’s absorbed. Then, she mixes it with flour, cotija cheese, salt and pepper, and then adds onions, chopped parsley, whole eggs and egg yolk. She fries the fritters and serves them with mayonnaise doctored with lime juice, a paste of Peruvian amarillo chiles and chopped Italian parsley.

Denis Zvekic, chef of Second Home in Denver adds cooked red quinoa to pancake batter as a lighter, more healthful alternative to typical pancakes. He tops them with mint and an apple butter made by cooking apples in apple whiskey. It’s on his breakfast and brunch menu for $12.

Correction: April 12, 2013 This article has been updated to reflect the current number of Seasons 52 locations.