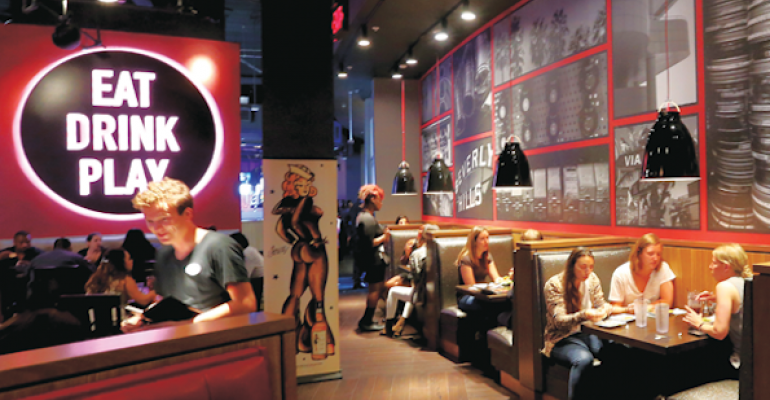 Casual Dining succeeds with focus on food and fun

Casual Dining has had its share of challenges over the past several years, buffeted by consumers trading down for quicker and less expensive fast-casual competitors, or splurging on polished-casual restaurants. But the segment still had some bright spots in the Latest Year from chains that emphasize not just food but fun.

“If the consumer today is going to take the time to spend 45 minutes to an hour in your restaurant at the prices you charge in casual dining, you better make sure it’s really an exceptional experience inside,” said Wally Doolin, chairman and founder of the Dallas-based restaurant analytics firm TDn2K, parent to Black Box Intelligence.

Dave & Buster’s led the segment’s systemwide sales growth in the Latest Year, at 16.3 percent, followed by Texas Roadhouse, at 12.8 percent, and Buffalo Wild Wings, at 10.5 percent.

Estimated sales per unit continued to give Casual Dining major muscle among Top 100 segments. The Latest-Year average ESPU was nearly $4.4 million, up 1.3 percent from the Preceding Year. Dave & Buster’s, with its big-box entertainment venues, led the pack, with ESPU of $11.3 million.

Dave & Buster’s was followed by The Cheesecake Factory, at $10.5 million per unit; Maggiano’s Little Italy, at $8.3 million; Yard House, at $8.2 million; and BJ’s Restaurant & Brewhouse, at $5.6 million.
Dave & Buster’s growth has benefited from the expanding purchasing power of Millennial customers.
“From a guest-target perspective, our emphasis remains on play-together young adults, from 21 to 39 years old,” Dolf Berle, Dave & Buster’s president and chief operating officer, told analysts after releasing record-setting earnings for fiscal year 2015.

Dave & Buster’s appeals to its core demographic because of the amusements and food and beverage it offers.

“They also have a passion for sports viewing in a social setting,” Berle said, adding that they “are very attracted to new experiences and new sensations” provided in Dave & Buster’s tailored arcades and televised-sports viewing areas. Buffalo Wild Wings shares a similar draw.

Texas Roadhouse led percentage growth in estimated sales per unit, at 6.7 percent, followed by Dave & Buster’s, at 4.9 percent, and Ruth’s Chris Steak House, at 4.5 percent. Latest-Year ESPUs were negative at seven of the total 26 Casual-Dining brands in the Top 100, with Logan’s Roadhouse at the bottom of the list. 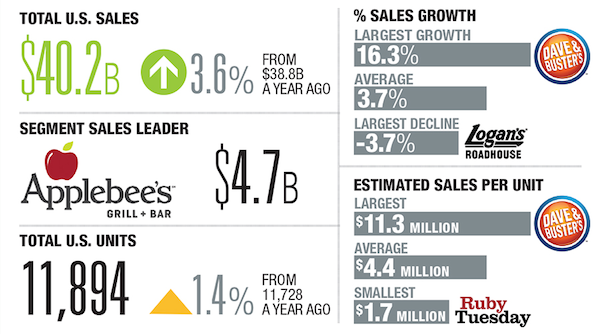 While Dave & Buster’s saw growth in its Millennial appeal, Berle noted that the concept has been careful not to alienate older customers.

“We try to appeal to two secondary targets, which are families who visit us on a walk-in basis and corporations having party events,” Berle said.

Dave & Buster’s keeps the newness fresh, he said, by changing and promoting games and menu items, which includes “at least three launches per year of new games, new food and new drinks that are all marketed on national TV and complemented with a limited-time offer to build excitement and a call to action.”

Among the top 10 Casual-Dining chains based on share of segment sales, only three brands gained share in the Latest Year: Buffalo Wild Wings, Texas Roadhouse and The Cheesecake Factory. The brands with largest share — Applebee’s, Olive Garden and Chili’s — saw their share of sales erode in the Latest Year.

Yard House topped unit growth in the Latest Year, with a rate of 11.9 percent, followed closely by Dave & Buster’s, at 11.1 percent, and BJ’s Restaurant & Brewhouse, at 9.6 percent.