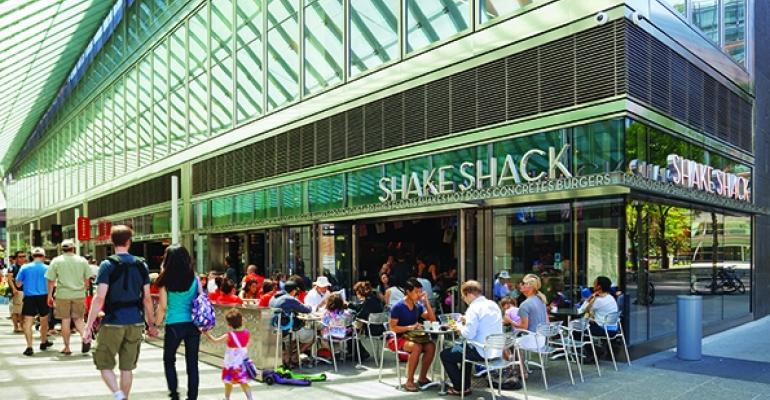 Burger chains dominated the top five fastest-growing chains in the Second 100 in the Latest Year, capturing four of the five spots and indicating that America is in no way tired of meat patties on a bun.

Shake Shack slid easily into first place, rising from No. 2 in the Preceding Year, with more than 60-percent growth in domestic systemwide sales.

Shake Shack’s domestic systemwide sales of $193.2 million in the Latest Year put the Limited-Service/Burger chain at No. 178 in the overall Second 100 sales ranking. Yet the chain’s 60-percent growth rate far outpaced the rest of the pack.

Shake Shack ended the Latest Year with 49 domestic units after building 13 new locations in 2015. That’s a 36-percent increase over the Preceding Year.

The chain also grew estimated sales per unit by 15 percent, to $4.5 million, as customers flocked to Shake Shack and the company raised prices.

Shake Shack began the year with a highly publicized initial public offering that saw its stock more than double on its first day of trading.

The chain has grown largely based on its reputation for quality. Danny Meyer, the highly regarded restaurateur, started the concept as a food cart in New York City’s Madison Square Park in 2000. It opened its first location in 2004. 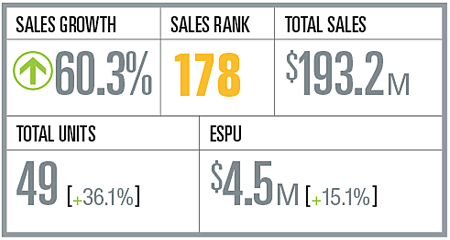 Shake Shack locations have become popular destinations, generating long lines of customers eager for the chain’s burgers and frozen custard. It has also earned Shake Shack a reputation that far outpaces its size.

The chain is targeting relatively few, high-volume locations that become destinations. And it has aggressive growth planned for 2016 — including restaurants in Los Angeles, Dallas, Arizona and Minnesota — promising to continue strong growth in the coming years.

White space: Currently in 14 states and the District of Columbia, the chain moved to the West Coast for the first time this year, where the concept is competing well against local cult favorite In-N-Out Burger. Growth is expected to kick up a notch in fiscal 2016 with the addition of 16 units planned, and another 16 restaurants in 2017.

Chicken: The new Chick’n Shack sandwich, added in January, showed potential for growing sales as the base for limited-time and localized offers.

Breakfast: Only available in some restaurants, breakfast sandwiches could be a growth opportunity where it makes sense.