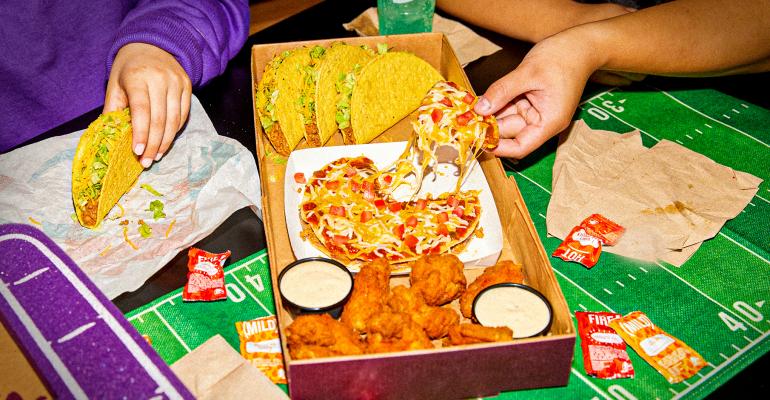 Taco Bell relaunched wings for a limited time, the chain announced on Thursday.

The wings, which come in a group of eight and are coated in queso seasoning, were last seen on the menu for a brief time last January before selling out. The wings cost $6.99.

Related: Why Taco Bell is bringing back wings

There’s also a combo meal called the Ultimate GameDay Box. It includes eight wings, four crunchy tacos, and one traditional Mexican Pizza and will be available from January 26 through February 9. The box costs $22.

"The Ultimate GameDay Box allows Taco Bell to compete in a space that’s been traditionally reserved for pizza and wings, in a way only this brand can," said Sean Tresvant, Global Chief Brand Officer. "A shareable meal that delivers the Mexican Pizza, which over-exceeded our forecasts last year due to fan demand, Crunchy Tacos, which are one of our top-selling items, and the ultra-craveable Crispy Chicken Wings, which drove massive headlines and demand last year, makes this an easy choice for those debating on how to feed their friends and family, no matter the occasion."

New this year is a “wings filter” on the Taco Bell app that shows which locations have the wings. Taco Bell wings sold out before the end of the LTO last year, which only lasted one week.

This is all part of Taco Bell’s strategy to compete with other chains (including other Yum Brands chains) to eliminate the veto-vote during game days when customers want wings and pizza.

While the Mexican Pizza leverages ingredients that Taco Bell already features on the menu, the chicken wings are an addition that add a layer of complexity due to the supply chain and rising costs. However, chicken-wing prices have fallen below pre-pandemic levels.