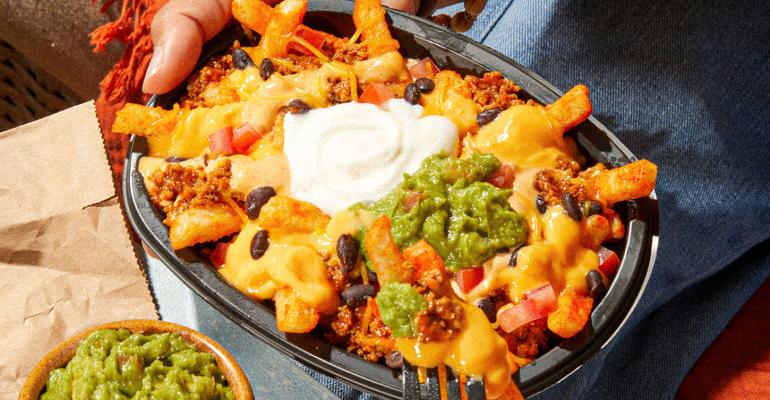 Taco Bell has brought back the Enchirito for the first time in nearly 10 years, while also introducing 7-layer Nacho Fries and testing grilled cheese Nacho Fries.

Taco Bell seems to have figured out the right cadence for product launches to generate strong sales and traffic. For Q3, that launch was the beloved Mexican Pizza.

This quarter, it may very well be the Enchirito, which has officially made its return to menus nationwide for the first time in nearly 10 years. Taco Bell asked fans to vote on whether to bring back the Enchirito or the Double Decker Taco and the Enchirito prevailed. It will be available in stores until Nov. 30. The company said this democratic approach was the first time in brand history where fans had a direct impact on the menu. The chain brought back the Mexican Pizza after fans created a petition demanding its return.

The Enchirito has been around since 1970 and includes beef, beans, diced onions, red sauce, melted cheddar cheese served on a soft flour tortilla. It is now available for $3.79.

The 7-layer Nacho Fries include black beans, tomatoes, reduced-fat sour cream, nacho cheese sauce, chipotle sauce, shredded cheeses, seasoned beef and guacamole. The guacamole is a “revamped” recipe for Taco Bell, with Hass avocados prepared daily and tomatoes and onions. The fries are available à la carte for $3.99 or in a burrito for $3.49.

The grilled cheese Nacho Fries are topped with grilled, marinated steak, nacho cheese sauce, chipotle sauce, mozzarella, cheddar and pepper jack cheeses. The price for the product test is $3.99, or $3.49 for beef.

These mark the latest round of innovations for Taco Bell’s Nacho Fries, first launched in 2018. In October, the company launched Loaded Truff Nacho Fries. It has also introduced variations such as Rattlesnake Fries and Reaper Ranch Fries. After the product’s launch, Nacho Fries quickly became the chain’s most successful product ever and they are now part of one in four orders at the chain.

“Taco Bell is a brand is truly relevant, easy and distinctive with the unique ability to stand for value with the current economic environment, you have a broad enough range to appeal to consumers across every demographic,” he said.