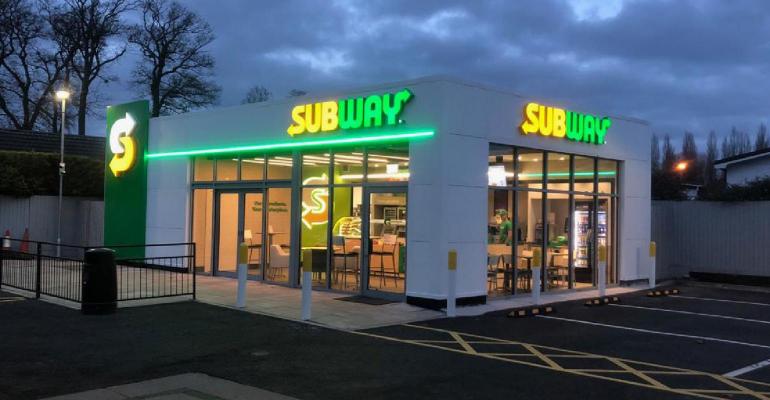 Milford, Conn.-based Subway, which is privately held by Doctor’s Associates Inc., said the 2021 sales results provide “positive momentum” going into 2022 and was driven by its Eat Fresh Refresh menu update and other initiatives.

“Despite challenges brought on by the pandemic, such as reduced operating hours, 75% of the system, representing more than 16,000 locations, experienced a 7.5% increase in same-store sales in 2021, compared to 2019,” the company said in a press release.

“Overall U.S. restaurant same-store sales for the entire system were positive for the last three quarters of the year, progressively getting better and resulting in December sales up 8.7% vs. the same period in 2019,” the brand said.

John Chidsey, Subway CEO, said in a statement that "2021 sales results indicate we have the right team and strategy to bring our multi-year transformation journey to life.

"As we continue to evolve and build a better Subway," Chidsey said, "our priority remains working closely with our network of dedicated franchisees to help them grow their business and deliver a better food and better guest experience."

In an interview with Nation’s Restaurant News late last year, the Subway CEO said the company was focused on quality and not quantity of units.

“I don't really see a lot of growth in the U.S. other than on the nontraditional side,” Chidsey noted in that December conversation. “I don't think we'll close a lot more restaurants — maybe a handful around the edges — but I think the U.S. is sort of in a steady state, and all the growth will really be international.”

Among international developments over the past six months, Subway has signed agreements in India, Indonesia, Kuwait, Saudi Arabia, Thailand and the United Arab Emirates for more than 3,000 restaurant commitments.

In addition to the Eat Fresh Refresh effort, a menu overhaul introduced last July, Subway said it has improved its digital and in-restaurant experiences.

“Digital sales exceeded $1.3 billion in 2021, tripling since 2019, with efforts focused on being accessible and adapting to meet guests changing needs across online ordering, delivery, curbside, pick up and catering,” the company said.

A new catering program will be unveiled in the spring, Subway noted.

Subway has more than 37,000 restaurants in more than 100 countries.