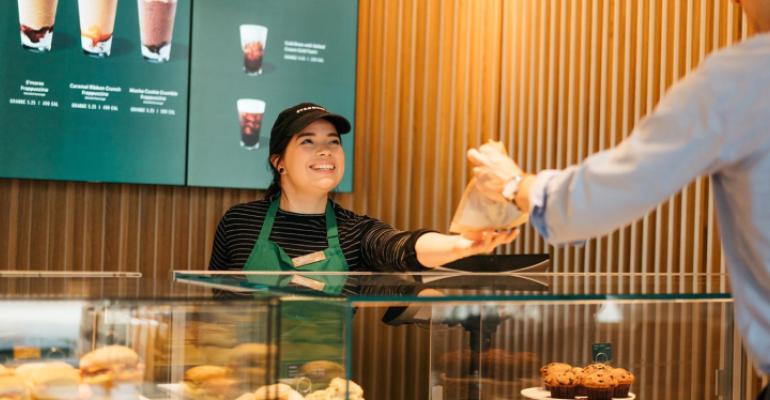 What started out as a few stores voting to unionize in Buffalo, N.Y. has transformed into a massive labor movement that has impacted other industries and become too big for Starbucks to ignore, though they have allegedly been trying to.
Data & Research>Top 500 Restaurants

Starbucks workers walked out at more than 100 stores this weekend: How should Starbucks respond?

The Starbucks union is coordinating strikes across the country, with workers demanding union contracts with improved wages and no more union busting

Shortly after the one-year anniversary of the first Starbucks union election, workers at 100+ unionized cafes around the country organized a strike that lasted for three days this past weekend. What started out as a few stores voting to unionize in Buffalo, N.Y. has transformed into a massive labor movement that has impacted other industries and become too big for Starbucks to ignore, though the union claims they have been trying to.

This past weekend, 1,000 workers at 100+ unionized stores across the country walked out, dubbing their efforts a #DoubleDownStrike, and asking potential Starbucks customers to not cross the picket lines. The workers were protesting Starbucks shutting down stores allegedly in response to union activity (though Starbucks has repeatedly denied the association and has mostly cited that these were poor-performing stores or were closed for safety reasons).

The strike was also coordinated in tandem with the #NoContractNoGiftCard campaign organized by SBWorkers United where employees have tried to spread the word on social media to discourage people from buying Starbucks gift cards as gifts this holiday season until Starbucks agrees to create union contracts with organized stores.

day 2 of our #DoubleDownStrike in West Phoenix complete! Thanks to all of the support we received throughout the afternoon! #NoContractNoCoffee #NoContractNoGiftCards pic.twitter.com/l23PNCJAdF

I stand in solidarity with Starbucks workers who are making their voices heard in Massachusetts and across the country. Remember—don’t cross the picket line at these locations: https://t.co/N8iARwBdxG #DoubleDownStrike https://t.co/5dyr04vbnv

Although Starbucks has not yet negotiated union contracts with any of the stores that have voted to unionize, the movement has inspired change at other companies. On Dec. 16, for example, workers at Intelligentisa Coffee ratified a contract with raises, paid meal breaks, and fairer scheduling, just four months after the café voted to unionize. Starbucks workers are still waiting on their contract, however.

“We won elections on a store-by-store basis and are bargaining individually,” Casey Moore with SBWorkers United told Nation’s Restaurant News. “However, workers are coordinating through a national bargaining committee to address common concerns throughout all Starbucks stores. Starbucks is refusing to bargain in good faith with workers. Company representatives have walked out of every session we’ve had since late October, sometimes after mere minutes. Starbucks is refusing to engage in accessible bargaining by not allowing some worker members of our committee to join via Zoom.”

Starbucks, however, has denied both union busting and avoiding contract negotiations, telling Nation's Restaurant News that managers are informed and trained to not discipline any worker for "engaging in lawful union activity."

"It is unfortunate that Workers United continues to spread misleading claims while disrupting the Starbucks experience that our partners and customers have come to love and expect," a Starbucks representative told Nation's Restaurant News. "Despite these delay tactics, we remain focused on working together and engaging meaningfully and directly with the union to make Starbucks a company that works for everyone, and we urge Workers United to uphold their promises to partners by moving the bargaining process forward.”

Starbucks told Nation's Restaurant News that the company will have participated in 75 single-store bargaining sessions and "we continue to engage meaningfully and directly with the union."

Since his return as interim CEO of Starbucks, Howard Schultz has tried multiple times to regain control of the tug of war between corporate and the growing union, by explicitly and implicitly condemning the actions of SBWorkers United as an unnecessary “outside influence,” and a threat. Starbucks executives have maintained that unions will be worse for employees in the long-run. But we believe that the company's alleged silence in response to union demands indicate either dissension at the top in regard to handling union activity, or a true deer in the headlights moment.

Until this moment in Starbucks history, the company has historically touted itself as a progressive, employee-first workplace, in becoming one of the first restaurant brands to tie diversity goals to executive compensation, and not being afraid to speak about political movements. But, the company’s capacity for cool has seemingly run out as the union movement has gained strength, despite the fact that unionized stores only represent about 2% of Starbucks’ total U.S. portfolio.

Moving forward, Starbucks needs to make a decision because the company is at a crossroads: the coffee mega-chain can’t simultaneously be seen as a partner-first company while also quashing dissent in what many — even U.S. Senators — are calling union-busting attempts.

Right now, the union is telling only one side of the story, and pulling back the curtain and layers of PR speak to uncover overarching issues of employee scheduling conflicts, communication issues, and lack of training that has been rampant throughout the labor-starved restaurant industry. Stories like the persistent bedbugs and other hygiene problems at the Starbucks Roastery in New York City have slammed the company with bad press over the past several months.

As Starbucks looks to usher in a new CEO in 2023, now might be the best time to switch tactics before it’s too late to turn the ship around. Starbucks should act quickly to become more transparent both in the public eye, and in negotiations with the union. If the company’s goal is to discourage more more stores to unionize and to try to regain control of the narrative, resisting partnership with unionized stores is the worst tactic. Ironically, the more Starbucks cooperates with the union and draws up contracts, the more likely the fervor against corporate policies will die down. If that happens, in the long-run, potential union voters might not even see unionization as necessary.