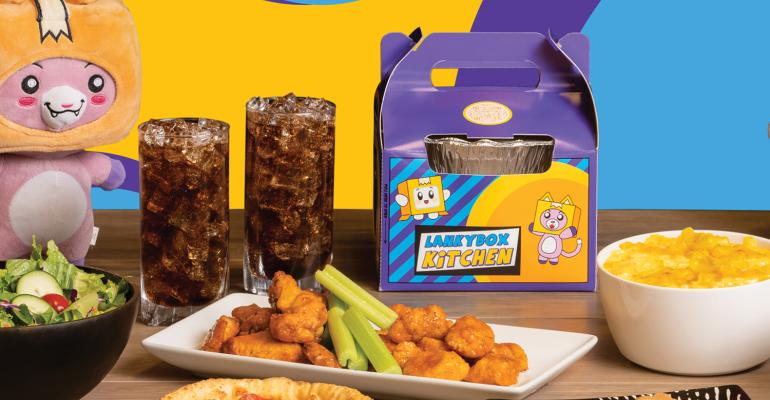 Chuck E. Cheese launched its first virtual brand, Pasqually’s Pizza and Wings, in the throes of the pandemic in March 2020. The chain maintained the brand even as dine-in business returned. Now, it's doubling up on its virtual kitchen presence, today announcing the launch of LankyBox Kitchen in collaboration with Virtual Dining Concepts. LankyBox Kitchen’s items are created in more than 400 Chuck E. Cheese locations and available via third-party delivery providers.

“Chuck E. Cheese has been widely known for its innovation in games and entertainment, and now, we are thrilled to partner with VDC to lead the family entertainment and restaurant category with this new ‘eatertainment’ delivery-only dining concept with the massively popular LankyBox brand,” said David McKillips, president and CEO of Chuck E. Cheese parent company CEC Entertainment, in a statement. “We have been creating fun meals for families for over 45 years and with more than 460 locations, we know this exclusive scratch-made menu will be popular for customers across the country.”

Perhaps its most successful partnership, however, is MrBeastBurger, which has nearly 1,800 locations and recently opened a brick-and-mortar location to a crowd of 10,000 people. The nascent trend of content creators specifically jumping into the restaurant space has proven to be popular. Earlier this week, for instance, DoughBriks Pizza opened on Los Angeles’ Sunset Boulevard to four-hour-long lines. The concept was created by YouTuber David Dobrik, who has 18.1 million YouTube followers.

Virtual brand company C3 has also found some traction with this playbook, recently launching the Stonie Bowls brand, for example, in partnership with YouTuber Matt Stonie. Stonie Bowls is expanding through TGI Fridays locations. In fact, C3 has an entire division focused on creating virtual brands with digital creators. The objective is to reach Gen Z consumers, and C3 has said it expects the division to reach about $1 billion in revenue by 2025.

“Virtual Dining Concepts is excited to collaborate with creators Justin and Adam, on LankyBox Kitchen, a unique, family-friendly food concept designed for their built-in and loyal community,” Stephanie Sollers, CEO of Virtual Dining Concepts, said in a statement “This brand demonstrates our ability to continue to lead the virtual dining space and provide our restaurant partners, like Chuck E. Cheese, access to a captivated audience.”