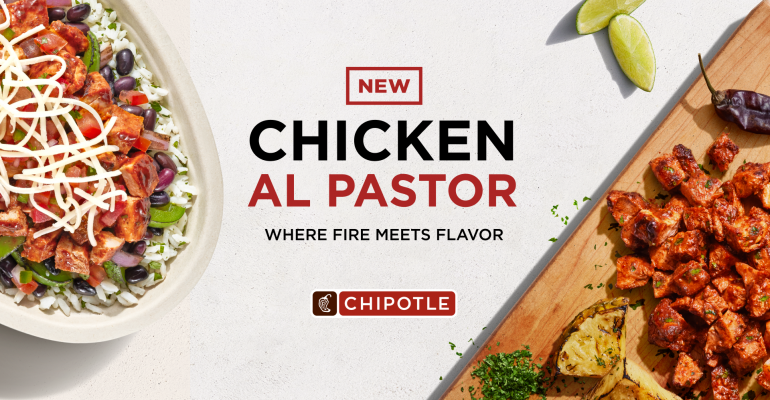 The menu item, in test at 94 locations in Denver and Indianapolis, is the restaurant chain’s fourth addition since May

Chipotle Mexican Grill is introducing Chicken Al Pastor to its menu at select locations, the chain announced on Tuesday. The menu item, available at 94 locations in Denver and Indianapolis, is a limited-time offer.

“We created Chicken Al Pastor to fuel our fans who have been craving spicy chicken from Chipotle,” Chris Brandt, chief marketing officer, said in a release. “The new menu item artfully pairs fire with flavor in a uniquely Chipotle way.”

That fire comes from a marinade made from spicy adobo, achiote, and Morita peppers which are then paired with pineapple, cilantro, and fresh lime juice on Chipotle’s grilled chicken, which is made in batches throughout the day.

To celebrate its latest menu innovation, Newport Beach, Calif.-based Chipotle is offering a $0 delivery fee on all Chicken Al Pastor orders placed through the Chipotle app and Chipotle.com from September 6 through September 11.

This isn’t the first menu innovation Chipotle has rolled out recently. In the past few months alone, the brand introduced a new version of its cauliflower rice, released its first seasonal drink LTO, and tested the Garlic Guajillo Steak at 102 locations nationwide. The company’s Pollo Asado LTO, released in March, was its first new chicken menu item in 29 years.