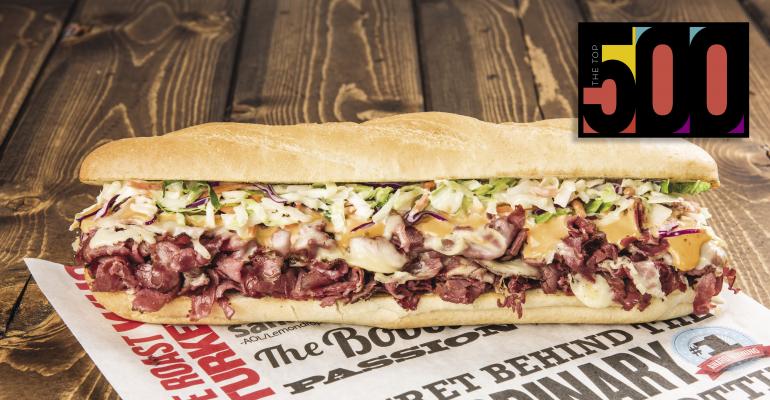 Ready to roll out in 2020 were two innovative extensions to Capriotti’s cheesesteaks, which is its most popular menu line.
Data & Research>Top 500 Restaurants

Capriotti’s runs headfirst into its problems — and thrives

As mandated shutdowns closed restaurants across the country, Capriotti’s was looking at 35–40% same-store sales declines, and the Las Vegas–based chain’s officials knew they would be forced to have difficult conversations about cash flow.

“It was one of those times where we had to take a really hard look at the business and say, ‘Are we even going to survive?’” Morris said.

But Morris and Smylie, long-time friends and business partners, had acquired the concept to franchise in 2007, just before the Great Recession. At the time, when things looked similarly bleak, a mentor gave Morris what he now sees as profound advice: “He said you have to run headfirst into your problems,” said Morris.

So Morris decided that if the company was going to run out of money anyway, why not spend the most they could on a marketing program?

The fast-casual brand was already well positioned to expand on delivery and omni-channel ordering, he said. “We thought, let’s just see if we can remind the world that we’re available and we’re open.”

Capriotti’s spent $250,000 on a local marketing campaign in Las Vegas, where the chain has about 40 units. Because so many other advertisers had pulled ads as a result of the pandemic shutdown, Capriotti’s was able to get more for the money, flooding TV channels with commercials.

Within three weeks, the chain went from negative 40% same-store sales to positive results. Morris and Smylie decided to take the marketing push systemwide.

Fortunately, the sandwich chain — which is known for its innovative menu — had something to talk about.

Ready to roll out in 2020 were two innovative extensions to its cheesesteaks, which is its most popular menu line: the first plant-based Impossible meat cheesesteak and a decadent American wagyu cheesesteak.

“It was a way to say to our guests, ‘We’re here for you. We’ll continue to innovate,’” Morris said.

Capriotti’s ended 2020 with same-store sales up by nearly double digits. The mostly franchised chain had systemwide sales of nearly $84 million, up 9.5%, and Capriotti’s added 18 units for a total of 114 at the end of the year, according to the Top 500 report.

Before the pandemic, Capriotti’s had begun looking for an acquisition target, preferably another QSR brand with strong to-go and off-premises business. Early this year, the company acquired Atlanta-based Wing Zone, a simpler brand for franchisees to operate, compared with the more culinary-focused sandwich concept.

Now the goal is to re-concept Wing Zone as a tech-forward brand.

Morris said the company is working to redevelop Wing Zone with cashier-less stores, for example, and back-of-the-house kitchen automation, such as frying robots.

Tests of the newly improved Wing Zone are expected to begin in August, probably in Nevada, he said.

Celebrating its 45th anniversary this year, Capriotti’s expects to end 2021 with about 100 new stores in the pipeline.

In addition, both Capriotti’s and Wing Zone will expand their reach into new markets with ghost kitchens, Morris said. Using partners like CloudKitchens, Kitchen United and Reef, franchisees will be able to offer both menus for delivery only without costly investments in real estate.

“I do think it’s early and we’re going to get a lot smarter,” he said, “but I do think there’s a great economic model here.”