ADVERTISEMENT
It was a year of great loss

The Top 500 represent more than 80% of total industry sales, but is selected by unit count, so limited-service segments account for nearly 90% of the locations in this study.

Where was the growth? The delivery/takeout friendly segments of LSR Chicken and LSR Pizza were the only segments to report sales growth, of 5.2% and 2.7%, respectively.

The industry shrank in 2020

Among Top 500 players, unit counts declined by 1.5% to 229,979, which means chains within the cohort shed about 3,616 locations during 2020. Unit counts were down among almost all segments, hitting the full-service and casual-dining segments hardest. The one exception was fast casual, which grew units by a mere 0.1%.

Of limited-service segments, salad/healthful concepts saw the most growth in unit count (1.8%), but industry darling Sweetgreen was not among the growers with its loss of eight units for a total of 151 at the end of 2020. Rather, it was Smoothie King, Tropical Smoothie Café and Nekter Juice Bar reporting both sales and unit increases.

The FSR American segment suffered the most unit losses (down 7.3%), and Ruby Tuesday accounted for nearly half of the 446 net closures with 205.

In addition to the largest chains, the Datassential tracked about 467,070 independent restaurant units, and, of those, 10.1% locations had closed permanently.

The biggest chains were somewhat less vulnerable. Among chains with more than 500 locations (comprising almost 200,000 units total), 7.7% were shuttered for good.

Winners had the right tools

There’s no disputing that the brands that thrived through 2020 (Domino’s, Chipotle, Wingstop) and the segments that grew (LSR chicken and pizza) had recurring keys to success: A strong off-premises model, drive-thrus and the technology to connect people with their food as conveniently as possible.

McDonald’s was the No. 1 restaurant chain by sales in 2020 with $39.53 billion, an increase of 0.4% over the prior year, despite a 1.2% decline in unit count to 13,673. McDonald’s benefited from its drive-thru strategy, its investment in delivery and its growing digital presence. The chain moved on in the first quarter of 2021, with double-digit increases in domestic same-store sales as COVID restrictions began to lift across the country.

The expected losers surprised us all
Walk-Ons

Given the fact that there were no sports to watch, bars were largely shut down and diners were not allowed inside, one might think sports bars would be the biggest losers in 2020. And sure, sales were down 8% for the segment, largely reflecting a 43% sales decline at the “eatertainment” brand Dave & Buster’s.

But 13 brands “called the right plays,” Datassential found, embracing takeout and growing their delivery percentage more than any full-service sector except midscale,
producing an aggregate 1.2% gain in unit count. It also helped that they tend to be in suburban locations and serve chicken wings.

Walk-On’s Sports Bistreaux, new to the Top 500, contributed 12 unit openings and a 13% gain in annual sales to the segment.

Chick-fil-A saw sales climb 3.8% to $10.8 billion. Wingstop’s digital sales alone topped $1 billion in 2020, even as virtual chicken players flooded into the coop. And, though much smaller with 51 units versus Wingstop’s 1,359, the Korean chicken chain BB.Q Chicken matched Wingstop’s 21% growth in sales last year. Bonchon, Jollibee and Nando’s Peri-Peri all grew both sales and units in the U.S., despite the pandemic.

Digital and delivery went from niceties to necessities

About 86% of operators said takeout/delivery sales could not make up for lost dine-in business, but off-premises business certainly helped them survive.

Between June and December 2020, Top 500 companies in all segments grew their takeout and delivery sales significantly. The highest growth was in the LSR Salad/Healthful segment (with takeout up nearly 42% and delivery nearly 43%). LSR Dessert/Snack concepts also saw about 70% growth in takeout and 40% growth in delivery business, and LSR Bakery-Cafe reported a 40% increase in takeout sales and nearly 20% for delivery.

One potentially huge component of the pandemic’s impact was the rise of virtual restaurant brands, or brands created for delivery-only without any brick-and-mortar presence. Many of the largest full-service operators embraced this model, creating wings, burger or barbecue brands that are executed out of existing restaurant kitchens or commissary-style ghost kitchens.

Brinker International, for example, said in June 2020 that its virtual brand It’s Just Wings was generating $3 million per week in sales out of the company’s Chili’s and Maggiano’s Little Italy locations.

For the Top 500 report, such virtual brand revenues are included in overall restaurant sales counts, but it’s safe to say the growing number of delivery-only operations were important to maintaining sales, especially for full-service chains.

“Virtual brands were a lifeline for full-service restaurant brands that got aggressive and experimental with them,” said Brandau. “It’s hard to know the effect they had, but it was broadly very positive, and they could be a solid base of sales going forward.”

Before the pandemic, restaurant operators sought out great urban locations near crowded office buildings promising lunch lines out the door, evening happy hours and expense account dinners. In 2020, with workers staying home, those urban locations were a structural disadvantage.

But chains with a solid suburban footprint had a leg up. And though Brandau predicts the nation won’t be returning to the office overnight, especially with school and childcare needs still in flux for many, urban locations will come back.

“I don’t see us becoming a completely work-at-home nation,” he said. “You’ll need to pick and choose your real estate carefully, as always. Growth will be in smaller cities and highly walkable suburbs, like Alexandria, Va., for example. But it is our hope that the downtown central business district
restaurants will get a lot of their customers back.”

In past years, the biggest increases in sales and unit growth were seen among the bottom 250 “emerging” chains within the Top 500 report. In 2020, however, that tradition flipped, and it was the larger chains — the Top 250 — that showed the best performance, or at least suffered the least loss.

Convenience was king, it may long reign

The pandemic taught American consumers to embrace convenience. And though restaurants are expected to benefit from pent-up demand as COVID restrictions continue to lift, pandemic patterns of behavior could have a lasting effect, the report said.

Three quarters of diners are cooking at home more, and 56% are getting takeout over dining in restaurants. Half of consumers expect to brown-bag their lunches when they return to work. “Going forward, the expanded capabilities for carryout, drive-thru and delivery — not to mention the mobile technologies powering their adoption — will continue to be a crucial offering for growth-minded chains,” Datassential concluded. 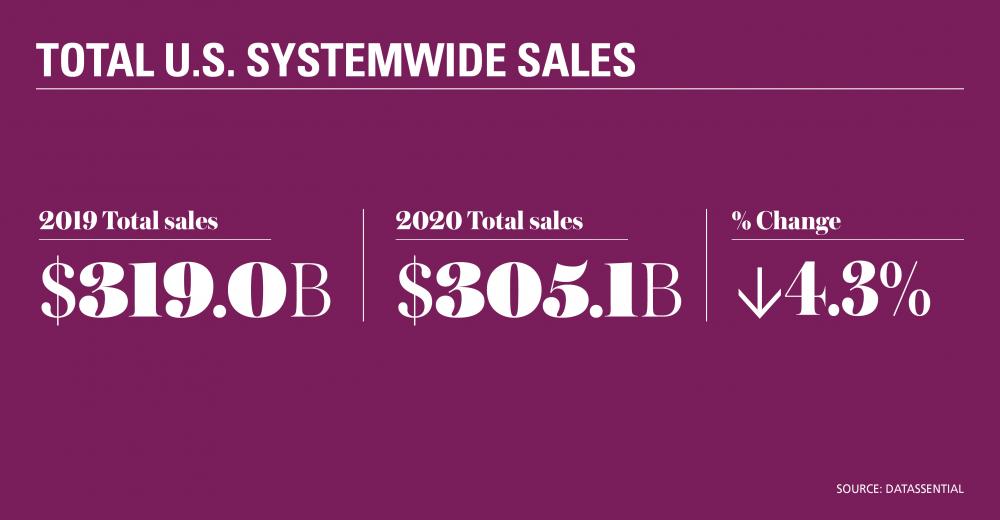