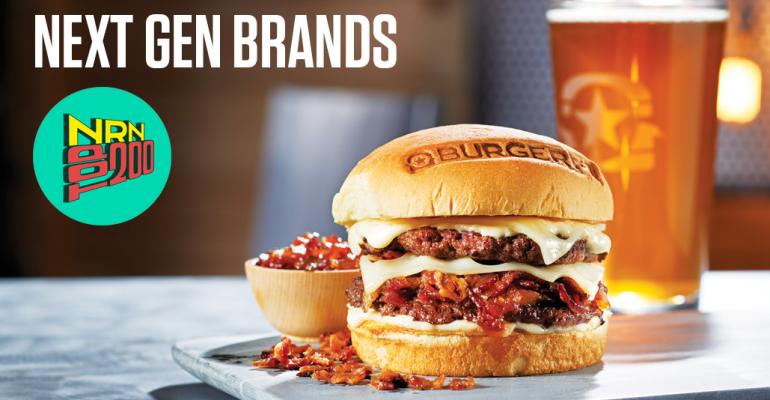 Introducing the Next Generation of restaurants

The 2018 class of Next Gen brands — a group of 10 diverse chains tracked as part of NRN’s Top 200 research — showed solid growth stats in the Latest Year, with four posting double-digit growth in both U.S. sales and domestic units.

These concepts, which run the gamut from quick-service pretzel chain to ‘fine’ casual-dining seafood house, fell short of the $170.9 million in U.S. systemwide sales necessary to quality for this year’s Top 200. However, their growth trajectories — as a group they average 15.3 percent domestic sales growth and 12.1 percent unit growth — make them hard to ignore.

The largest of the Next Gen brands, Wetzel’s Pretzels, had systemwide sales of $162.2 million in the Latest Year, while the smallest of the group was Eddie V’s Prime Seafood, with $114.8 million in estimated Latest Year sales.

Next Gen brands were selected because they had the highest systemwide sales among chains that did not qualify for the Top 200 and also met two other key criteria: They had sales growth in both the Latest and Preceding Years as well as unit growth in the Latest Year. Selection criteria were designed to highlight brands that are on the rise, as opposed to struggling brands that may have slipped out of Top 200 ranks.

Phoenix-based casual-dining chain True Food Kitchen, which specializes in healthful fare, led the pack in growth with an estimated 46.5-percent increase in systemwide sales and a 31.3-percent increase in units in the Latest Year. The chain also had the highest rate of growth in Estimated Sales Per Unit, at 6.9 percent.

Casual Dining dominated the list with seven of the 10 brands coming from that segment, indicating a pocket of innovators in a market that has struggled in recent years. Other segments represented on the Next Gen list were Beverage-Snack, Chicken and Limited Service/Burger, with one brand each.

“As we saw among some standout Top 200 chains, Next Gen brands have strived to differentiate themselves, be it a system that isn’t afraid to ‘twist’ classic dishes, a la Lazy Dog Restaurant & Bar, or an apparent sports-bar operation that wants to be known for its ‘chef-driven’ menu, as is the case at Duffy’s Sports Grill,” noted Alan J. Liddle, NRN’s senior editor of data and event content and lead Top 200 analyst.