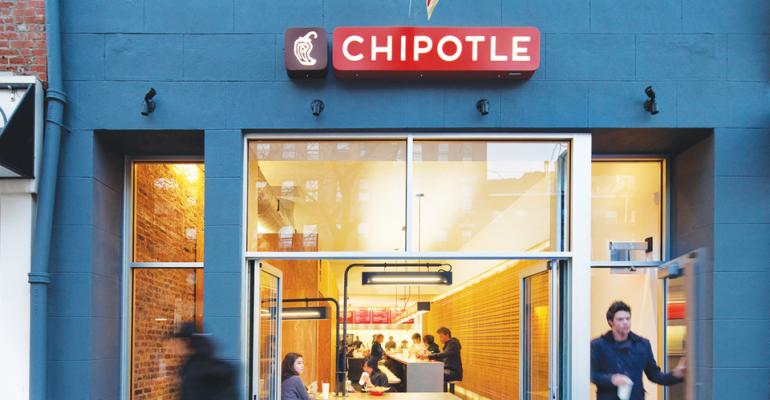 The one to watch

Chipotle Mexican Grill, which had nowhere else to go but up, crawled back to life in the Latest Year.

Estimated systemwide sales in the U.S. grew 14.9 percent to nearly $4.4 billion in the Latest Year, compared to a plunge of -13.9 percent in the Preceding Year.

The surge in sales earned Chipotle the No. 13 spot in the Top 200 sales growth rankings. In the Preceding Year, it ranked No. 198. 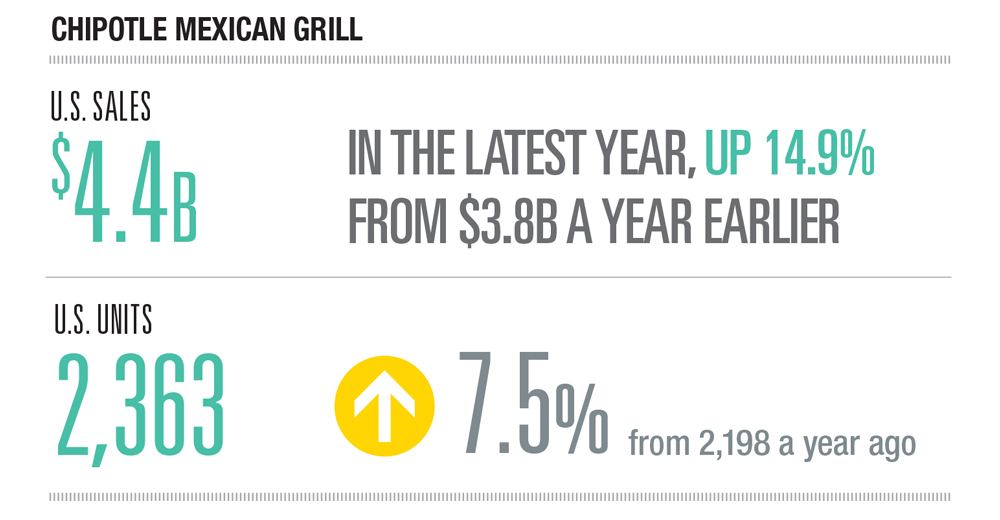 Still, analysts and investors are not dancing in the streets of Wall Street. The chain is a long way from its pre-food scandal numbers.  In the Prior Year, or fiscal 2015, Chipotle’s unit-level sales were $2.4 million.

So, despite encouraging sales, and the hiring of bright and brand-driven specialist Brian Niccol as CEO, Chipotle remains on shaky ground.

Bob Phibbs, CEO of The Retail Doctor, said customers are returning, but at the sacrifice of margins.

Since the 2015 food safety crisis, which involved multiple outbreaks in different U.S. markets, Chipotle resorted to a flurry of promotions to woo customers. The marketing strategy included coupons, buy-one-get-one free offers, free guacamole and the introduction of the Chiptopia loyalty program. 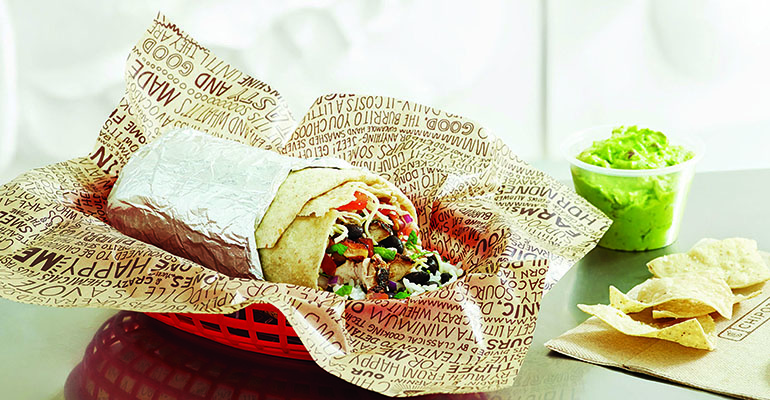 “They were buying back customers,” Phibbs said.

What they really needed to do is buy back trust. That was hard given the eruption of several separate foodborne illness attacks involving salmonella, E. coli, and norovirus.

“Chipotle lost a lot of consumer trust. The outbreak was like Glenn Close in ‘Fatal Attraction.’ It just kept coming back,” Phibbs said.

In 2017, and early 2018, the chain has regained some of its footing. Chipotle saw same-store sales inch up 2.2 percent for the first quarter of 2018 — the inaugural period under the leadership of Niccol.

It was the chain’s fifth consecutive quarter of positive same-store sales. During the period, sales increased 7.4 percent to $1.1 billion — but that was nearly identical to its prior quarter results.

The needle is moving, but not very fast.

Niccol, who started in early March, knows the chain can do much better.

During a June 27 special conference call with investors, he asked Wall Street to be patient. He said “gaps” in operations, training and marketing will be fixed.

He hired former Taco Bell colleague Chris Brandt as CMO and Marissa Andrada as the brand’s first chief human resources officer. Both are charged with changing culture at the company — both internally and externally.

Niccol declined to give 2Q guidance during the call, only stating he’s “pleased with the underlying trends.”

He laid out a laundry list of fixes from adding delivery through its app to improving employee training to starting a $2 happy hour program. But lack of fresh details fell flat on investors as most everything he discussed had already been stated during Chipotle’s first quarter earnings call.

Also troubling: the company said it would close up to 65 underperforming units in the near-term. Charges related to the company’s restructuring and relocation to Southern California would cost the company roughly $115 million to $135 million.

Not surprising, the company’s stock plunged 9 percent the next day, before recovering slightly by the following week.

Restaurant analyst Nick Setyan of Wedbush said in a research note that the “turnaround may not be out of planning stage yet.”

Maxim Group’s Stephen Anderson wrote in his post-call note: “We believe what was not said was as important as what was said, as we argue that he [Niccol] missed an opportunity to discuss international expansion potential and boosting shareholder returns.”