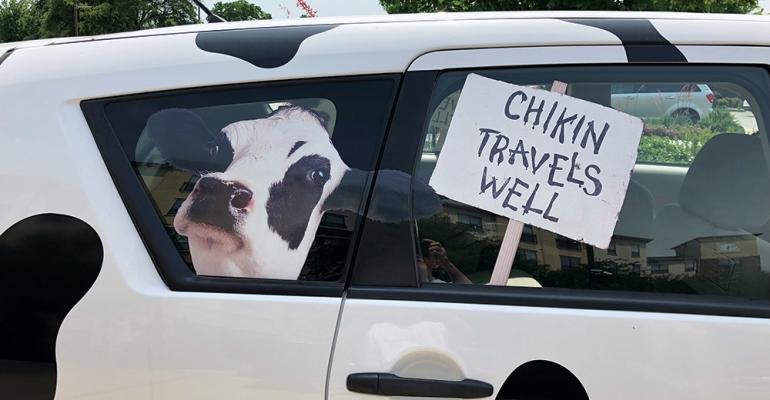 Chick-fil-A Inc. continues to grow sales and units — despite being closed systemwide on Sundays for a truncated six-day week — through continued streamlining of operations, using line-busters to shorten wait times both in the stores and the drive-thrus, offering catering and expanding into more urban areas.

The Atlanta-based quick-service brand’s reputation as a good business model got even more exposure when it came out earlier this summer that Scott Pruitt, the now-resigned administrator of the Environmental Protection Agency, asked a political aide in May 2017 to seek a Chick-fil-A franchise “business opportunity” for his wife, Marlyn.

In the wake of the Pruitt story, Chick-fil-A said it gets more than more than 20,000 franchisee applications a year and chooses only 75 to 80. 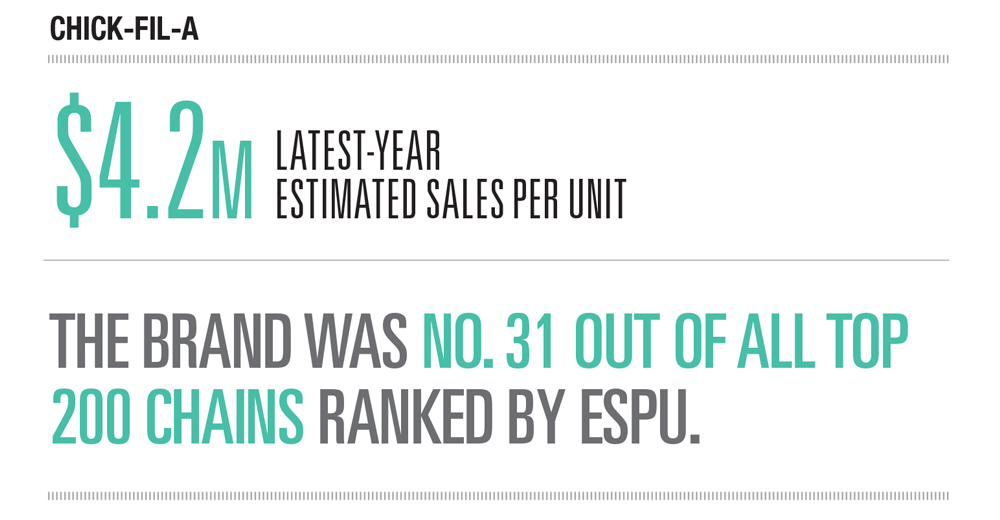 This year’s Nation’s Restaurant News Top 200 provided some of the reasons why the brand is so popular and growing at such a steady clip.

Chick-fil-A Inc. moved up one spot in the Nation’s Restaurant News Top 200, pushing Dunkin’ Donuts out of the No. 7 position. The brand known for its chicken breast sandwich with one pickle posted $9 billion in sales in its December 2017-ended Latest Year, an increase from $7.9 billion in the Preceding Year and $6.7 billion in the Prior Year.

It also gained market share in the competitive Top 200 Chicken segment, increasing more than 2 percentage points to 37.1 percent of sales in the Latest Year from 35 percent in the Preceding Year.

Sales per location also set Chick-fil-A apart, with the brand moving to No. 31 from No. 34 in Estimated Sales Per Unit, increasing 6.7 percent over the span of a year. The brand had ESPU of $4.2 million in the Latest Year, up from $3.9 million in the Preceding Year and $3.5 million in the Prior Year.

Some of those new units are in densely populated urban areas, such as the new five-story Chick-fil-A in Mahattan’s Financial District, which opened in March.

The new unit at 144 Fulton Street seats more than 140 customers over 12,000 square feet, which is nearly twice the size of traditional Chick-fil-A units.

“Spanning five floors, the restaurant will feature floor-to-ceiling windows on each level allowing for natural light throughout the entire restaurant, a signature monumental staircase accentuated by a skylight, three levels of dining with seating for 140 guests, a semi-private group meeting and dining space, two kitchens and a rooftop terrace that offers unimpeded views of One World Trade Center,” the company said in announcing its fourth New York City restaurant.

In addition to adaptive design, Chick-fil-A is also beefing up its technology with mobile ordering as well as staff members with line-busting tablets to cut the wait inside the stores and reducing time in the drive-thru, for which many units now have double lanes.

And for large-order delivery, some units are being outfitted with dedicated catering vehicles that carry some of the brand’s signature “Eat Mor Chikin” cow trade dress.

David Farmer, the company’s vice president of restaurant experience, told Buzzfeed earlier this year that the digital innovation is part of making the customer “feel like you just got hugged in the process.”

Chick-fil-A, founded in 1967, remains privately held by the family of creator S. Truett Cathy. It has restaurants in 46 states and Washington, D.C.