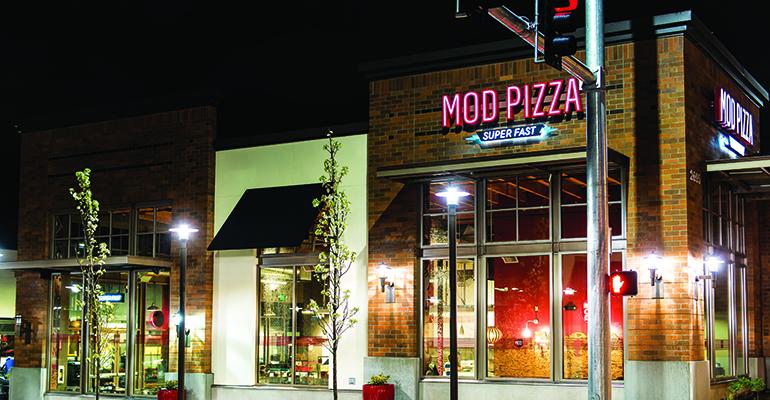 Segment stands out with marketing and social-purpose mission “MOD is a business that’s built around having a positive social impact,” said Scott Svenson, co-founder and CEO of MOD Pizza, who sees fast-casual pizza as a way to make people’s lives better.

MOD focuses on hiring people “who would have barriers to employment,” including people transitioning out of incarceration, rehab or homelessness. It also generally hires people well above the minimum wage, Svenson said. This was MOD Pizza’s first year in the Top 200. It barreled in at 141st, after having ranked outside the Top 200 in the Preceding Year, thanks to an 80 percent growth in domestic annual sales in the Latest Year. That growth was fueled by the opening of a net 110 units.

Blaze markets itself as a fun brand, “young and hip and a little bit irreverent,” Blaze CEO Jim Mizes told NRN, with an emphasis on experience as much as pizza, having basketball superstar LeBron James as an investor, franchisee and spokesman helps, too, Mizes said.

Domino’s Pizza, on the other hand, sells convenience. Technological advances and a focus on being wherever their customers want them to be mean guests can order pizza through Domino’s app with zero clicks in 10 seconds — and it only takes that long to give customers time to cancel the order in case a toddler grabs their phone, Domino’s executive vice president for communications Tim McIntyre told NRN.

Domino’s Pizza established its dominance as the country’s leading pizza chain in the Latest Year, posting 11.1 percent sales growth to $5.9 billion in domestic sales, surging past rival Pizza Hut, which saw a 4.2 percent dip in sales to $5.5 billion.

Domino’s is now not only the largest pizza chain in the United States in terms of sales, but it’s the ninth largest chain overall, replacing Pizza Hut, which fell from ninth to 11th in 2017.

Pizza Hut still had nearly 2,000 more domestic locations than Domino’s in the Latest Year — 7,522 compared with Domino’s 5,587 — but those Domino’s locations on average grossed $357,000 more than Pizza Hut units, according to NRN data.

Additionally, Pizza Hut closed a net 167 units in the United States in the Latest Year, while Domino’s opened a net 216 restaurants.

“That was the most net new stores in the U.S. for Domino’s in 20 years,” McIntyre said.

Marco’s Pizza, which is 100 percent franchised, also had a great year, with sales up by 14.8 percent as the chain opened a net 97 units, closing out the year with a total of 867 locations.

Blaze is also largely franchised, operating just six of the chain’s 237 Latest-Year units. Mizes said Blaze has more than 50 franchisees, all successful operators of other brands.

MOD Pizza is about 80 percent company owned, and its 72 franchise locations are divided among nine franchisees who Svenson said buy into his motivation to use pizza as a platform to make a difference in the world.

The company has an employee emergency relief fund and donates to community organizations such as Generosity Feeds, which MOD has partnered with to give more than $500,000 to children facing food insecurity.

MOD also pays its staff well. Svenson said that MOD conducted a study a year ago about employee pay across the 28 states in which it operates and found that its starting wage was 22 percent to 24 percent above the prevailing minimum wage. Employees also get medical and dental insurance.

Meanwhile, unit economics are sufficiently strong that Svenson said they’ve received more than $180 million in equity from investors who buy into the MOD model.

“There’s a very clear balance between [social] impact and profitability.”