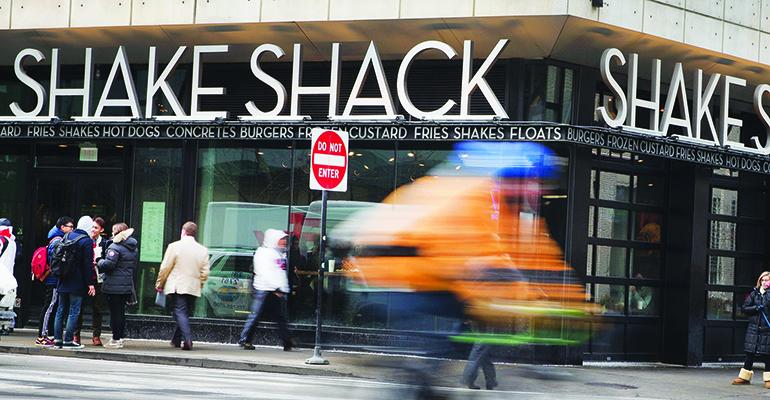 Chains are responding to a flurry of industry disruptions, from delivery to more demanding consumers Disruptions in the industry, from delivery to dealing with finicky Millennials, have triggered an avalanche of reinvention among the nation’s top fast-food chains.

The slowdown comes as diners continue to eat out less frequently, split their loyalties among a wide variety of brands and toil with meal kits delivered to their doorstep. Limited-Service chains in Nation’s Restaurant News’ Top 200 had average growth in U.S. systemwide sales of 3.6 percent, down from average Preceding-Year growth of 6.5 percent.

Chains making big gains were concepts that appeal to consumer demand for personalization and affordable but quality foods.

As such, the hottest fast-casual brands continue to expand like crazy, eclipsing the average unit growth within the total LSR segment. But even Shake Shack, which has been enjoying steady growth, slowed down a bit.

Shake Shack had a 32.5-percent gain in U.S. systemwide sales, down from Preceding-Year growth of 43.5 percent.  Still, it maintained its No. 3 ranking in the Top 200 list of fastest-growing chains.

LSR chains in the Top 200 had average Latest-Year unit growth of 4 percent, compared with 5.6-percent growth in the Preceding Year.

The industry is feeling the heat of cautious consumer behavior despite strengths in the economy, Kalinowski said.

“People are not feeling confident in their place in today’s economy,” Kalinowski said.

As they notice a slowdown in the fast-casual sector, fast-food chains are pouncing.

Experimentation, personalization and innovation are now ruling an industry born from feeding customers quickly in identical-looking restaurants from coast to coast.

Blending in is no longer in vogue. Sticking out, instead, is the key to survival.

Another factor to consider: did the intense value war, which has continued its march on LSR menus through 2018, hurt systemwide sales? Yes and no.

In early 2017, chains such as Wendy’s, Carl’s Jr. and Jack in the Box saw an uptick in frequency after introducing bundled meal deals that hovered around $4. The combo deals earned much buzz because at least two items in the package included sizeable meals, including a mix of burgers, sandwiches or chicken nuggets.

“It did move the needle because it was really new and different,” said Warren Solochek, senior vice president of industry relations at The NPD Group.

“I think there’s a desire to remind people that this is the core strength of QSR. It’s affordable to all,” she said.

Kalinowski said the value-menu battle might have brought diners through the door, but it didn’t boost overall same-store sales.

“I’m not certain it’s helping many concepts in a meaningful way. They all feel like they have to do it. They all have to be competitive because if you don’t do it, you might lose share to zillions of others who are doing it,” Kalinowski said.

The chain has been rock solid, with a strategy of offering a diversified menu that caters to varying budgets — Epic burritos (one-pound Chipotle-size burritos), premium salads and Platos to go after the fast-casual eaters — with a Buck & Under value menu and a Late Night Bites menu also available.

A wave of traditional fast-food chains such as McDonald’s, El Pollo Loco, Wendy’s and Taco Bell are modernizing stale cookie-cutter restaurants to appeal to a new generation of diners looking for individuality and storytelling from the brands they patronize.

“We’ve always been known as an innovative brand from a food perspective, and we’re starting to carry that through from a design perspective,” Deborah Brand, Taco Bell vice president of development and design, told NRN earlier this year.

In other words, the letter generation wants it all.

“Millennials are choosier and more specific in their tastes,” Cain said.

LSR chains are scrambling to accommodate. One of them working the fastest is also the biggest: McDonald’s.

Makeovers at the chain have been so dramatic that many of the old-style red-roofed restaurants have been razed and rebuilt from the ground up. Snazzier restaurants now offer table service, upscale burgers, modern furniture and delivery through UberEats. The company is also rolling out fresh-beef burger patties for Quarter Pounders in multiple markets.

Dozens of McDonald’s so-called Experience of the Future restaurants are also adding touch-screen kiosks for self-serve ordering. A separate initiative is Mobile Order & Pay, where customers can order through the app and pick up meals curbside, inside the restaurant or at the drive-thru. Curbside is available at most U.S. restaurants.

Individual McDonald’s units are reaping the benefits in terms of sales. And they are doing it at a time when the majority of Limited-Service brands in the Top 200 — 37 of 62 LSR chains — are working to counter Latest-Year decreases in Estimated Sales Per Unit.

By far the biggest disruptor in the restaurant industry is delivery. But here’s the twist:

While delivery is still dominated by traditional Pizza chains, the segment giving fast-food chains pause is a foe they’ve rarely had to deal with: Casual Dining.

Historically, casual diners could never compete on speed and convenience. But the steady rise of delivery in markets across the country has made Casual-Dining meals more accessible — and attractive — to diners looking to eat a quality meal while binge-watching their favorite TV show on Netflix.

The growing number of delivery apps is now placing burger choices at Red Robin next to Five Guys Burgers and Fries and McDonald’s. Subsequently, delivery is blurring the lines between segments.

Technology “is leveling the playing field” when it comes to competing with fast food, casual-dining operator Chris Simms told NRN earlier this year.

Still, ignoring delivery is not an option for any sector.

“If I’m a restaurant and I don’t do delivery, then I’m out of people’s consideration set,” Solochek said.