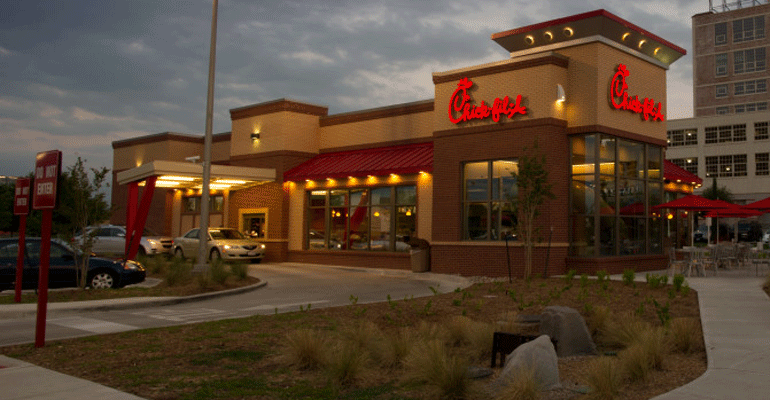 The Chicken, Limited-Service/Mexican and Beverage-Snack segments gained the most market share this year within the Top 200.

Six of the 12 segments showed market-share growth, based on the categories’ aggregate sales as a percentage of all Top 200 sales in the Latest Year.

Results for the other Top 200 segments were a mixed bag, as five segments — Casual Dining, LSR/Burger, LSR/Sandwich, Family Dining and LSR/Specialty — saw their shares of aggregate sales dip. In-Store’s share of Latest-Year sales was flat.

The Chicken segment was the leader in market-share gains, adding more than 0.3 percentage points in the Latest Year, with strong performances that grew share from Atlanta-based Chick-fil-A, Dallas-based Wingstop and Plano, Texas-based Raising Cane’s Chicken Fingers.

“Chick-fil-A was firing on all cylinders,” said Alan Liddle, data and event content director for the NRN Restaurant and Food Group.

In the Beverage-Snack segment, Seattle-based Starbucks Corp. continued its dominance in the Latest Year, growing its share of the category’s sales to 59.3 percent, from 58.6 percent the Preceding Year.

Part of Starbucks’ strong-as-a-double-shot performance was its digital innovation and loyalty program. Kevin Johnson, Starbucks’ chairman and CEO, said in a first-quarter earnings call in January that the chain added 1.4 million active Starbucks Rewards members in the U.S., an 11-percent year-over-year increase, bringing the total up to 14.2 million active members.

“Mobile payment in the U.S. has grown to over 30 percent of total tender,” Johnson said. “The ubiquity of mobile and credit card payment is enabling us to begin an exploration of cashless stores in the U.S.”

The LSR/Mexican segment saw market-share gains on the back of a return to positive performance by Denver-based Chipotle Mexican Grill, which clawed its way back from sales declines after several foodborne illness outbreaks in 2015.

“During 2017, we have made considerable changes around leadership, operations and long-term planning, and it is clear that, while there is still work to be done, we are starting to see some success,” said Steve Ells, who said in December that he would step down as CEO. He was succeeded in February by Brian Niccol, formerly CEO of Taco Bell.

Segments that suffered the biggest losses in market share were Casual Dining, followed by LSR/Sandwich, which partially reflected the closure of Subway units in the Latest Year, Liddle said.