/sites/all/themes/penton_subtheme_nrn/images/logos/footer.png
Recent
Recent
Panera experiments with robots
Dec 02, 2022
The Recipe of Success: What you can learn from James Corden
Dec 02, 2022
Quiznos parent company appoints Vanessa Fox as company’s first chief development officer
Dec 02, 2022
The third-largest pizza chain is ready for a war
Dec 02, 2022
DoorDash’s layoffs are not a time to panic: they’re a time to rethink the delivery industry
Dec 01, 2022
Featured
How 21 restaurant companies performed in their most recent quarters
Nov 22, 2022
How eco-friendly Seattle restaurant chain Just Poke is doubling in size in 2022
Nov 17, 2022
In the Mix this week: White Castle’s culture, a CREATE recap, Denver’s restaurant scene and more
Oct 27, 2022
How this emerging brand is planning on nearly quadrupling in size in just one year
Oct 21, 2022
Data & Research>Top 500 Restaurants 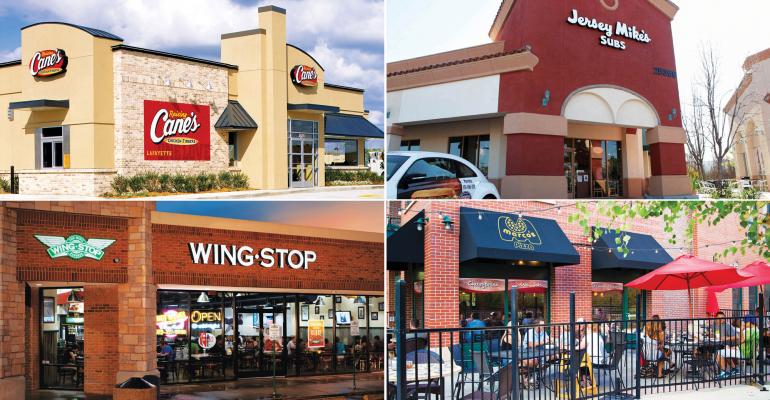 Start Slideshow ›
This is part of the Nation’s Restaurant News annual Top 100 report, a proprietary ranking of the foodservice industry’s largest restaurant chains and parent companies.

Standout restaurants in the Top 100 are spread across multiple segments, but chicken ruled the roost among the 10 fastest-growing chains, in terms of U.S. systemwide sales.

Those four Chicken chains eclipsed brands in the Top 10 from other segments, including two pizza players — Marco’s Pizza and Domino’s — as well as one each in Casual Dining (Dave & Buster’s), Limited Service/Sandwich (Jersey Mike’s Subs), Beverage-Snack (Starbucks Coffee) and Limited Service/Specialty (Panda Express).

While the Top 10 traditionally features chains that booked a larger percentage of growth on a smaller base, the 2017 class included several big players, like Starbucks, with 13,172 U.S. locations, and Domino’s, with 5,371 domestic units.

Newcomers to the Top 10 included No. 7 Panda Express, which was No. 14 in the Preceding Year, and No. 9 Starbucks, up from No. 13. They replaced Firehouse Subs and Wawa.

Take a closer look at the 10 fastest-growing restaurant chains.