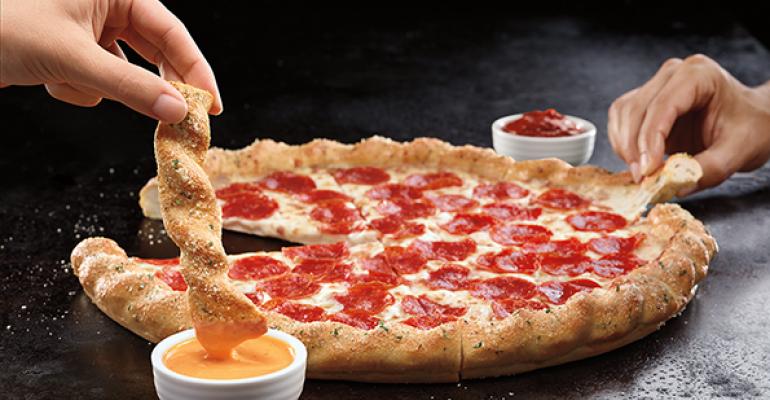 Pizza Hut retained its title as No. 1 in the Pizza segment, in terms of sales, in the Latest Year, but the Yum! Brands Inc. chain may be losing its grip on the top spot.

Upon releasing results for the first quarter ended March 31, Yum CEO Greg Creed labeled the pizza chain a detriment to the company’s overall success in the period.

“Our strategic transformation of Yum! Brands is already well underway, helping us deliver a solid start to 2017, with core operating profit growth of 9 percent in the first quarter,” Creed said in a statement. “This growth was led by Taco Bell’s impressive same-store sales growth of 8 percent and double-digit core operating profit growth at KFC, partially offset by weakness at Pizza Hut U.S.”

Pizza Hut reported $5.8 billion in U.S. systemwide sales in the Latest Year, down 0.9 percent from the Preceding Year. The brand earned the ninth overall Top 100 spot in this category both years.

Domino’s reprised its role in the 10th overall Top 100 spot in terms of sales, but it gained considerable ground on Pizza Hut in the Latest Year.

Domino’s, which notched $5.3 billion in 2016 domestic sales — a nearly 11-percent rise from the Preceding Year — is on track to take the Pizza segment’s top spot in the near future.

“In January, Domino’s revealed that earlier this decade, it had set an internal goal of overtaking Pizza Hut as the No. 1 pizza chain in terms of market share,” said Mark Kalinowski, restaurant industry analyst for Nomura, in a report issued in May.

“We forecast that this transition will happen in the U.S. during 2017, with confirmation of this changeover likely by the end of springtime 2018,” Kalinowski wrote. “Such a change marks the end of a radical transformation in the U.S. limited-service pizza sector, where Pizza Hut has reigned supreme for decades.”

It’s part of a long-term strategy for Domino’s, which said it has completely changed how it does business, according to Tim McIntyre, Domino’s executive vice president of communications, legislative affairs and investor relations.

“We don’t innovate like a fast-food company,” McIntyre said.

“Everything is intended to be a permanent menu platform,” said McIntyre, noting that Domino’s price points are known for being static.

Additional growth efforts by Domino’s include getting all restaurants on a single POS system, and intensely grading franchisees and replacing inadequate ones, McIntyre said.

Domino’s decision “to be honest with ourselves” allowed it to upgrade its offerings between 2009 and 2010. The returns have been favorable: While Pizza Hut was losing market share, Domino’s collected it. In the first quarter, Domino’s marked its 24th consecutive quarter of positive domestic sales.

The company also led the way in Estimated Sales Per Unit for the Pizza segment, with 7.7-percent growth in 2016. Competitor Pizza Hut was challenged in that regard, boosting its ESPU by a relatively small 0.6 percent.

With the No. 1 and No. 2 spots spoken for in the Pizza segment, Little Caesars Pizza took home the bronze, with $3.7 billion in systemwide sales in the Latest Year.

Though Little Caesars’ estimated U.S. sales have risen for several consecutive years, its share of Top 100 Pizza segment sales dipped from 18.2 percent in the Prior Year to 17.5 percent in the Latest Year. That share erosion came as rivals, including Domino’s, Papa John’s Pizza, Marco’s Pizza and Round Table Pizza boosted their sales by even greater rates than Little Caesars in the Latest and Preceding Years.

For the second consecutive year, Marco’s Pizza put up the largest growth rates for both sales and units, at 17.1 percent and 15.4 percent, respectively.