The company offers durable plastic takeout containers that guests can return to collection spots within a community to be cleaned, sanitized and returned to restaurants to be used again.

In Portland, for example, more than 90 food vendors have signed up and there are 40 drop-off sites. About 3,500 users pay a small subscription fee for the service. Jocelyn Quarrell, GO Box’s owner and CEO, estimates the program has eliminated about 225,000 single-use disposables from the waste stream.

Soon a restaurant chain — not yet revealed — will announce use of a branded GO Box reusable container, and a neighborhood in Midtown Manhattan with a lot of office buildings will test it this year, she said.

Out of Boulder, Colo., comes Vessel Works, which has signed on to a pilot with The Ecology Center in Berkeley, Calif., to develop a municipal-scale reusable-cup program. Starting this fall, the Vessel system will be tested in a business district near the University of California, Berkeley to gauge business and customer acceptance.

Berkeley is one of the first cities to attempt to end the use of single-use plastics in restaurants by 2020.

Guests will be able to use a QR, or Quick Response, code to check out the cup and return it within five business days. They’re only charged if they fail to return the cup to street-side kiosks or participating locations. Vessel collects the containers, washes and sanitizes them and delivers them back to restaurants for reuse. There’s a per-use fee for restaurants, but it’s a sliding scale, depending on volume.

Dagny Tucker, Vessel’s co-founder, said the fees are comparable to the cost of disposables. The system is in use in Boulder, where about 10 vendors participate. Beyond Berkeley, more is planned for the Bay Area this year, though details cannot yet be revealed, she said.

In addition, she said a “very large restaurant chain” is also expected to announce a Vessel partnership in coming months with the target of a January launch.

Said Tucker: “We’re building the infrastructure for communities to make reusability a reality.”

The Rhode Island-based company Ozzi is capturing the closed-loop communities of colleges and universities, healthcare settings and corporate campuses, like most recently the headquarters of Freddie Mac, Exxon and British Petroleum, said owner and CEO Thomas Wright.

Ozzi uses the durable plastic O2Go containers —which Wright notes are certified by the National Sanitation Foundation (NSF) International to meet safety standards, as well as being microwavable and dishwasher safe — and they can be returned to machines that scan them in. Ozzi handles the sanitation and returns the containers to foodservice sites.

Wright estimates one container can replace 300 single-use disposable clamshells. The company is creating a system for Truckee, Calif., and others have expressed interest, he said.

“The war has been launched on single-use plastics in the U.S.,” said Wright. “I think you’ll see a resurgence of to-go reusable products is essential.”

In Durham, N.C., GreenToGo offers sturdy plastic reusable containers — a single compartment or a three-compartment version — that are used by about 30 restaurants. More than 700 consumer subscribers, who pay a monthly or yearly fee, can check out the containers via a smartphone app.

All guests have to do is request a GreenToGo container when they buy takeout and later return the container to various collection points, like area grocery stores. The containers are washed at a commercial kitchen and returned to the participating restaurants.

The system allows restaurants to save money on purchasing disposables and know they are reducing what ends up in the waste stream, said Derek Rowe, GreenToGo’s director of solutions and innovation.

The company plans to add a cup to the system in September, and soon the service will expand to Raleigh, N.C.

GreenToGo, which in Durham is supported by a nonprofit, has open-sourced its materials and created an incubator program for cities that want to start their own reusables system.

Rowe said the idea has caught on among local employers, who purchase subscriptions for employees as a job perk. So far eight employers have signed on, which has boosted participation.

“When the subscription is free, there’s less of a hurdle for users,” said Rowe.

The Australia-based HuskeeCup swap system is growing in the U.S.

The HuskeeCup is an aesthetically pleasing reusable coffee cup, which comes in 6-ounce, 8-ounce and 12-ounce sizes, with a universal lid. All are made of recycled coffee husks, a byproduct of the coffee-milling process, which reduces that material in the waste stream.

Consumers are invited to buy a HuskeeCup and use it at participating cafes and restaurants. They can bring in their used cups and “swap” it for a clean one — which might be a different color, but that’s part of the fun, the company says.

The café can then wash and sanitize the cups as they would a dine-in version to use again and again.

Participating cafes around the U.S. include: Insomnia Coffee Co. in Oregon; Arcadia Coffee in Fort Worth, Texas; and At Land Coffee in New York City. 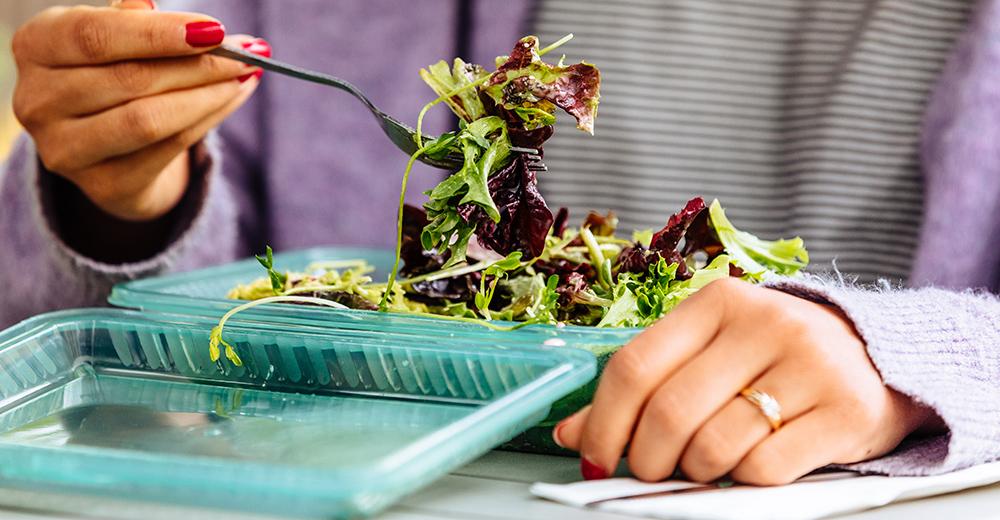 Next Up
How Uber drones deliver Big Macs
Start Slideshow ›