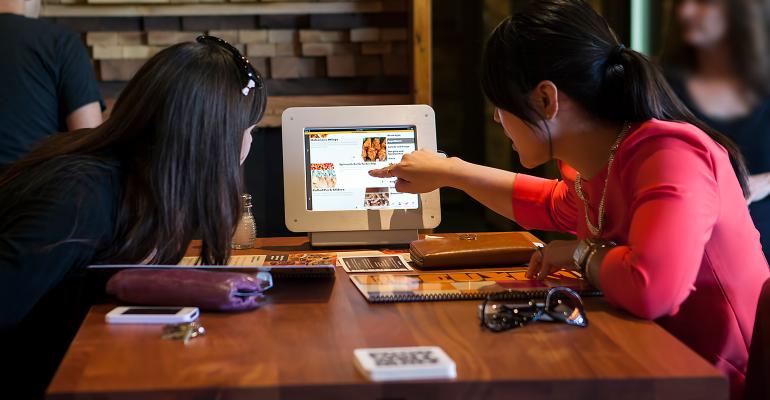 Stacked
At Stacked, guests use tableside technology to order food and pay the bill, but the brand makes sure interaction with staff members occurs in between.
Operations>Technology

In an era of delivery, drones and kiosks, is hospitality dying, or just evolving?

In Pasadena, Calif., CaliBurger customers order and pay for a burger, cooked by a robot, using a kiosk equipped with facial recognition technology. In Denver, craft beer fans at Stanley Beer Hall fill their own pint glasses with self-serve taps. In North Dakota, a golf course delivers hot dogs and sodas to golfers by drone.

On a larger scale, customers at 17,000 McDonald’s restaurants around the world can order a Big Mac from a kiosk. And, soon the Chicago-based chain’s digital menu boards will use AI-powered software to automate upselling in U.S. drive-thru lanes. 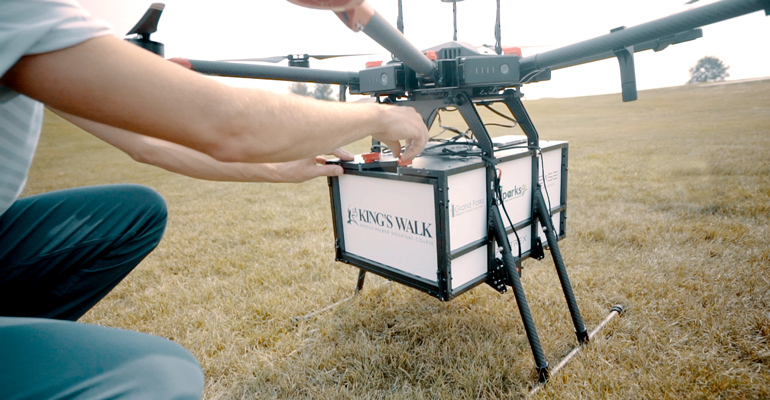 A drone flies in hot dogs and sodas to golfers in North Dakota.

Taken together, a common thread emerges among these small and large operators: There’s hardly any human interaction.

The personal touch, a bedrock principle of the hospitality sector, is being chipped away at restaurants adopting automated systems to streamline operations, address labor challenges, grow sales and, in some cases, dazzle experience-obsessed Millennials.

“In our industry, there’s been this debate: Should we offer old-fashioned hospitality or offer technology? We reject the idea that it is either/or,” said Jon Alexis, founder of the three-unit Malibu Poke in Texas.

Since last year, Dallas-based TGI Fridays has been using artificial intelligence, or AI, to harvest data that drives diner frequency, an important strategy in an industry desperate to reverse years of flatlining foot traffic. 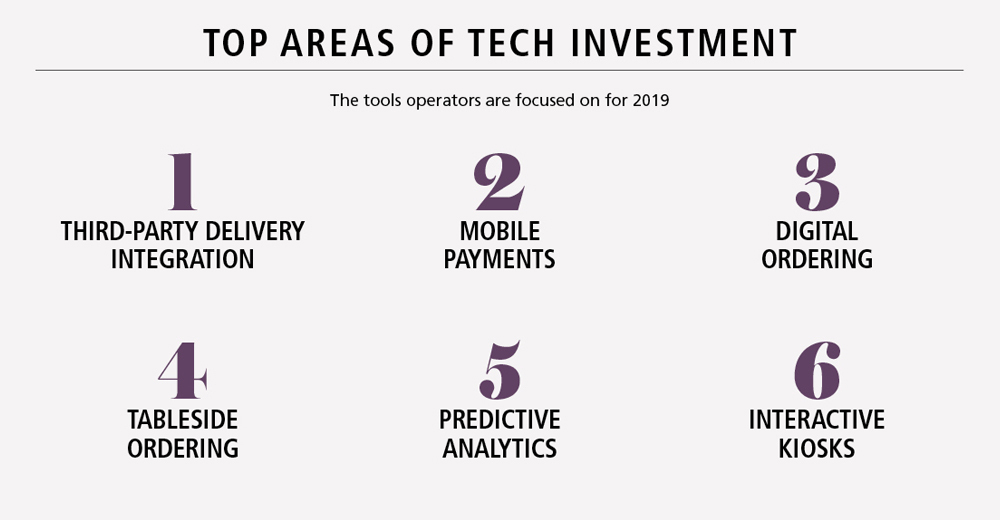 The casual-dining chain generates personalized marketing based on customer ordering habits. For example, a busy mom might get a text to remind her that she normally orders ribs for takeout on Tuesday nights.

“At the core, hospitality is still about serving guests,” TGI Fridays chief experience officer Sherif Mityas said. “I think what technology is allowing us to do is create more convenient ways to engage with a consumer whenever and wherever they happen to be.”

In late March, McDonald’s purchased Dynamic Yield Ltd., to use its AI-powered software to automate suggestive selling through digitized menu boards in the drive-thru lane.

“I think technology, which used to be considered to support the business, is now to grow the business,” McDonald’s chief financial officer Kevin Ozan said during the recent JPMorgan Gaming, Lodging, Restaurant & Leisure Forum Conference in Las Vegas.

Global foodservice analyst Paula Savanti said hospitality is not disappearing with the emergence of disrupting technologies such as delivery, drones and kiosks. She said automation, if done right, can lead to greater service.

“The more you can personalize to each individual — that’s the future,” said Savanti, an analyst at Rabobank, a Netherlands-based financial institution that works with foodservice and agribusiness around the world. 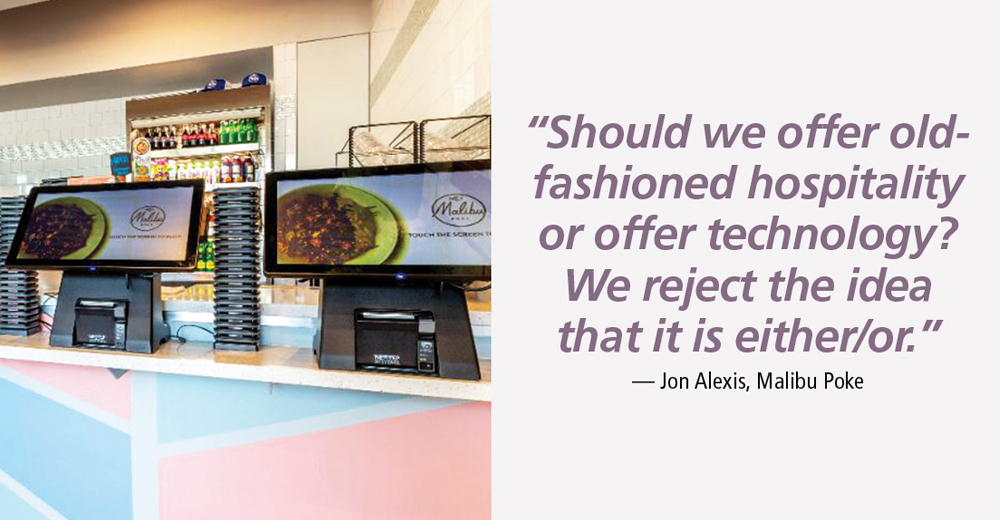 Malibu Poke’s kiosks enhance the customer experience by remembering past orders and enabling guests to sort ingredients by diet categories.

That’s the strategy at Malibu Poke.

“If tech doesn’t offer a better experience than a human being helping you, then we aren’t interested,” said Alexis, who also owns TJ’s Seafood Market & Grill, an upscale seafood concept in Dallas.

The first Malibu Poke opened in Dallas in 2017 with four self-serve kiosks that allow guests to customize poke bowls with touchscreens equipped with facial recognition software. The kiosks increase throughput, improve order accuracy and puts the consumer in direct control of creating their meal.

Alexis, owner and founder, said he follows Danny Meyer’s philosophy of Enlightened Hospitality, which calls for restaurants to build personal relationships, not transactions. Technology, he argues, is helping him achieve those goals.

Malibu Poke kiosks, for example, remember past orders — something most cashiers can’t do. The kiosks also give customers the option to sort ingredients by diet categories. If a diner is on a Whole30, paleo or gluten-free diet, he or she can filter for ingredients that meet one of those diet plans.

Even though an employee is not interacting directly with a customer, Alexis said Malibu Poke is still making “deep connections” with its diners. “It’s a very personalized curated experience.”

But is knowing every nuance about a customer somehow crossing the line from hospitality to invasion of privacy?

“It’s walking that fine line between creepy and helpful to your guest,” he said. “When they know you are trying to make it easy, they’ll reward you with their visit.”

Alex M. Susskind, professor of food and beverage management at Cornell University’s School of Hotel Administration, said the quick-service industry is going through a digital revolution similar to what happened when airlines began deploying self-serve kiosks.

At first, there might be some resistance, but once people get used to it, consumers see the benefits.

“If [technology] hasn’t made the service experience any worse, then I think it’s a win,” he said.

Over the last year, a few mostly independent restaurants have deployed robots to perform various repetitive tasks in the front and back of the house.

Robots are mixing drinks at Tipsy Robot in Las Vegas, assembling bowls at Spyce in Boston, flipping burgers at CaliBurger in Pasadena and cooking pizzas at Zume Pizza in Northern California.

Boutarel of the New England Consulting Group said restaurants are deploying robots for the “cool” factor.

Mityas, who’s dabbled in all kinds of automation but robots at TGIF, agrees.

“It’s a little bit about the sizzle versus the substance,” Mityas said. “I think people still want human interaction. It’s cool to talk about robots that flip burgers. At the end of the day, it has to be a win for restaurants.”

When Paul Motenko opened the first Stacked eight years ago in Torrance, Calif. — complete with an iPad at every table — he said his intent was to use technology to remove tasks that get in the way of hospitality: Taking orders, inputting orders into POS systems and processing checks. 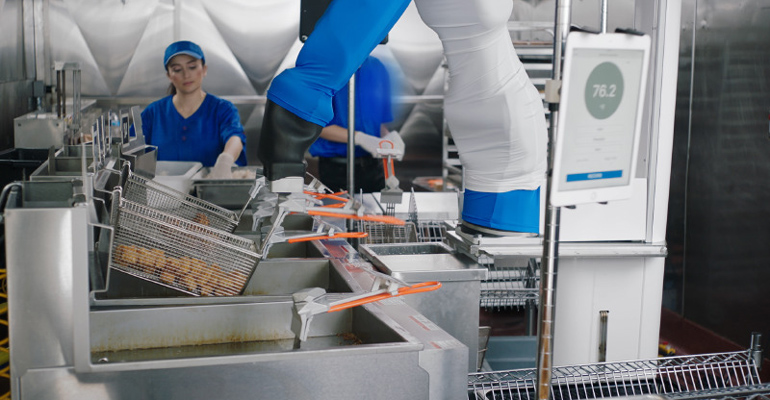 At Stacked, diners create their own custom orders, request additional drinks and pay the bill using an iPad on the table. Servers at Stacked, which has grown to five locations in Southern California, circulate in the dining room performing true acts of hospitality such as checking in on guests to ensure they’re having a good time, Motenko said.

“At first impression, some think technology might be replacing human beings, but it is not at Stacked,” said Motenko, co-CEO of the Huntington Beach, Calif.-based company. “As long as the team members engage, hospitality happens primarily between the end of taking the order to payment processing.”

While Motenko is a fan of automation, he said it should not be used as an antidote for rising labor costs. “For those restaurants that want to replace humanity with technology, I think they are making a mistake.”

The rising popularity of third-party delivery presents a huge hospitality conundrum for restaurants investing in technologies that encourage customers to never step foot into their dining rooms.

“There’s a disconnect. You close your eyes and hope for the best,” Motenko said. “If there is an issue with delivery, we have to rely on the delivery service to resolve those issues. It’s frustrating to not have that direct connection with the guest.”

But the delivery movement is hard to ignore.

Between 2018 and 2023, restaurant delivery is projected to grow at more than three times the rate of on-premises sales. Much of that is coming from digital orders, according to a recent delivery report by global management consulting firm L.E.K. Consulting.

L.E.K. projected the value of digital orders to go from $25 billion in 2018 to $68 billion in 2023. Restaurants are responding. According to a new survey by the National Restaurant Association, 37% of restaurants now offer online ordering and 32% accept mobile payments.

Matthew Harding, vice president of culinary at Piada Italian Street Food in Columbus, Ohio, said delivery has challenged the hospitality driven brand.   “We do two things. We sell food and we sell smiles.”

“We can’t affectionately show [customers] a smile when they get third-party delivery. We can’t instruct the third party to smile at them,” he said.

With digital orders accounting for 15% to 20% of sales at the 40-unit chain, ignoring delivery is not an option, either. What the brand can control is speed, accuracy and quality, he said, so Piada rebuilt its back-of-the-house systems to improve time and accuracy on orders.

Other chains like Chipotle Mexican Grill and Taco Bell have launched fully integrated delivery programs, as well, to ensure the best possible delivery experience for customers.

“If we can cut down our delivery time, that’s an enjoyable and memorable experience,” Harding said. “Those are components of hospitality beyond the smile.”

Bev Cain, president of the market research firm, said Chick-fil-A delivery users might be missing the “my pleasure” greeting and the overall in-store experience associated with the chain.

Having a stranger deliver Moulin’s flaky croissants and croque monsieur sandwiches runs counter to his brand’s philosophy. “I’m in the experience of daydreaming — getting you out of your rat race.”

Vrignaud opened Moulin in 2014 in Newport Beach, Calif., to give local Francophiles an authentic Parisian café experience. Every aspect of the restaurants oozes Paris, from the imported wicker bistro chairs to the French chefs cooking in the kitchen.

Still, he gave delivery a shot soon after he opened. But in late in 2017, he went cold turkey after a third-party delivery driver walked away from a $150 to-go order. The driver left the food on the counter after his navigation app alerted him to a traffic jam on the freeway. 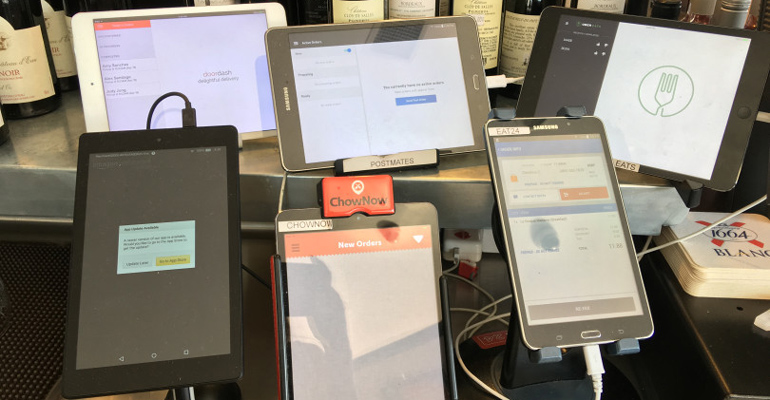 “He didn’t want to sit in traffic. I had to get a guy in the kitchen to deliver the order,” Vrignaud said.

Vrignaud, who circulates the dining room greeting regulars by name, said he has no regrets. Moulin will always be about the personal touch. “Hospitality is you walking in here and me saying ‘bonjour’ and I already know what you want as your hot drink.”