No. 9: Automation at McDonald’s: McDonald’s announced several technology initiatives in 2019 such as testing kitchen automation and Alexa-style voice ordering at a handful of stores across the U.S. The company said it is leaning into more automation to increase speed of service while simultaneously simplifying operations for employees.

No. 8: Drone drops and AV testing: Uber’s test of drones and Domino’s use of autonomous delivery robots caught the eye of Tech Tracker readers. It was our No. 1 most read Tech Tracker column of the year. The main stories focused on Domino’s AV test and Uber’s federally approved drone testing program in San Diego. The ride-hailing company, which operates Uber Eats, tested drone drops with McDonald’s and Richard Blais’ fine-dining venue Juniper & Ivy.

No. 7: DoorDash Kitchens: In October, DoorDash launched a shared ghost kitchen space called DoorDash Kitchens. That story was well read, but a month later readers took more notice when DoorDash said its latest tenant was Chick-fil-A. A local franchisee is renting a space from the Silicon Valley kitchen so it can deliver its classic chicken sandwiches without opening an additional location to service residents living in the pricey region.

No.4: McDonald’s deploys AI: During a conference call, McDonald's Corp. CEO Steve Easterbrook, who was later fired, said the chain had deployed AI-powered menu boards at 700 restaurants through Dynamic Yield. It was the first big news revealed by the brand after it purchased the decision logic technology company in March. The menu boards use AI to automate the upselling of menu items based on time of day, trending items and weather.

No. 3: Pizza Hut’s autonomous test: The struggling division of Yum Brands caught buzz over its announcement to team with FedEx Corp. on a delivery test using autonomous carts. The Plano, Texas-based chain tested the FedEx SameDay Bot. The autonomous rover is designed to travel on sidewalks, bumpy roads and steps.

“The system is designed to reduce friction in the restaurants so that customers can go through the entire ordering process effortlessly and employees can focus on providing the strongest possible guest experience in the restaurants,” the company said.

No. 1: Delivery breakup: In July, McDonald’s Corp. ended its exclusive Uber Eats partnership. The Chicago-based chain launched nationwide delivery with Uber Eats in 2017. While the relationship will continue, McDonald’s said it is time to move on to new relationships. It is now working with DoorDash. 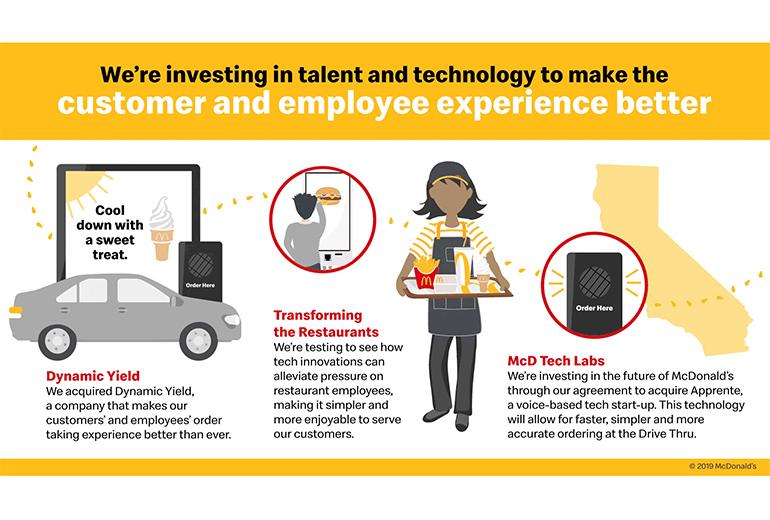