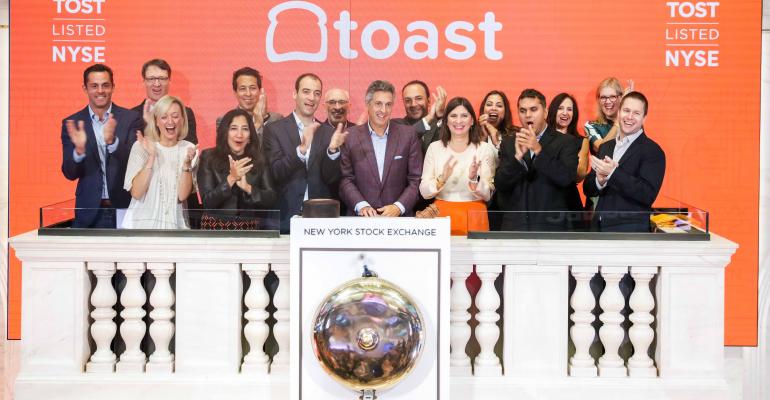 Toast debuts IPO at $10 above expected price: ‘we’re in the early innings of where this could go,’ cofounder says

After a pre-debut estimated value of $30-$33 per share, restaurant technology company Toast launched its IPO on Wall Street on Wednesday at $40 per share, and could raise up to $869.6 million in total. Toast’s value has also skyrocketed from $8 billion a year ago to $20 billion at the time of valuation.

“We still believe we're in the early innings of where this could go,” Toast president, cofounder and COO Aman Narang told Nation’s Restaurant News, calling it a “milestone journey” for the decade-old company. “We believe we have an opportunity to be the platform of choice for the restaurant industry. And we're thrilled that the investor community agrees.”

Toast began life as a QR code application for customers to be able to pay at their table and has grown into an all-in-one sales management and POS system with a roster of 48,000 restaurants as of June 2021, up from 33,000 the year before.

Of course, during the pandemic, Toast took a hit along with the rest of the restaurant industry during the challenging days of closed dining rooms and dwindling restaurant revenues, even as digital sales soared. But Narang is not worried.

“I feel confident that the restaurant industry is well set up for the future,” Narang said. “And the more we can make the business side easy for restaurants, where they can leverage the technology and make the business of running a restaurant more efficient, I think the better they'll do. […] Restaurant operators are not technologists: they look for something simple, accessible.”

Ultimately, the goal is for Toast to help restaurants boost their bottom lines and wages for employees, without having to pay high fees or invest much into deciphering the best technology solutions for their company.

Toast isn’t the only restaurant technology company to make headlines on Wall Street this year: Olo filed for an IPO in February and made its stock market debut in March, raising $450 million in its IPO of 18 million shares at $25 each.