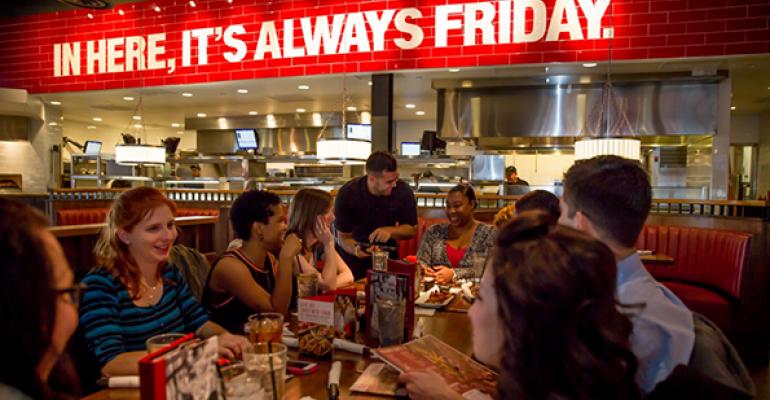 Competitors such as Brinker International’s Chili’s Grill & Bar and DineEquity’s Applebee’s Neighborhood Grill & Bar have rolled out tabletop tablets that allow customers to order some items and pay via credit card at their convenience.

However, TGI Fridays said it was intent on maintaining interaction between service staff and guests.

“Windows 8 gave us a platform that allowed us to develop a new user interface, which gives our servers even better tools to delight our guests and make their experience even more enjoyable,” Sessions said.

Many restaurant tablets rely on proprietary hardware or “custom ruggedized devices built to withstand the abuse of a kitchen environment,” Microsoft said in a press release. But “such solutions can be expensive and take a long time to develop and deploy,” the company said.

The server-held device “puts the technology in the hands of the Fridays people, preserving the experience they can offer guests, rather than using tabletop technology that would reduce their interactions,” Microsoft said.

TGI Fridays has completed a six-city pilot in Minnesota and Texas. “It will deploy the tablets in 80 additional restaurants, with more than 2,000 tablets by March,” Microsoft said in its statement.

“The self-ordering kiosk gives the customer a fun, interactive and user-friendly way to control their order,” Lindblom said in a statement.

The kiosks lets customers place, customize and review their menu selections, as well as pay for purchases. The device can double as an employee POS when needed, the companies said.

Managers can run various sales and shift reports, and employees can use the kiosks to clock in and out for shifts and breaks.

CKE reported that one out of every three customers at the Nashville location used the kiosks for placing orders.

More on the customer order kiosks at Hardee's >>

TGI Fridays has 900 casual-dining restaurants worldwide, with 535 locations in the U.S.