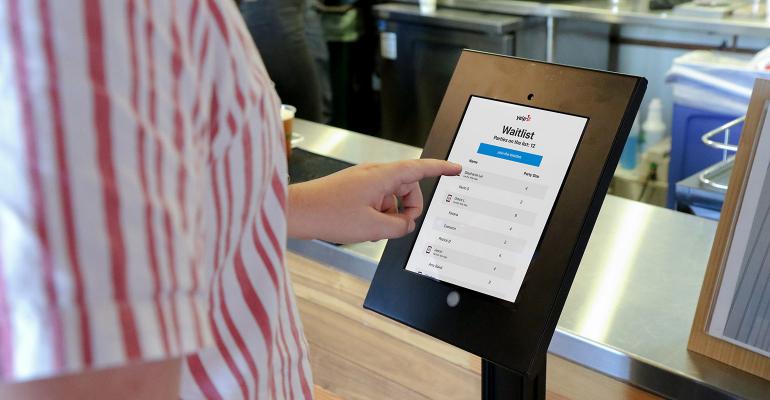 Consumer review site aims to be a one-stop app; pay at the table evolves

More than a year after acquiring Nowait, Yelp is expanding its waitlist features to include Nowait Kiosks and Nowait On My Way.

The kiosk, which sits on a pedestal or counter, allows diners to put their name down on a waitlist instead writing it down on a clipboard.  After inputting their information, diners get updates about the status of their table through their phone.

Devon Wright, general manager of Yelp Restaurant Marketplaces, said the kiosks are particularly valuable to restaurants that don’t have a dedicated host.

Nowait is part of Yelp’s arsenal of tools that are aimed connecting users with businesses. The consumer review site wants to be a one-stop app, especially for restaurant users. Besides putting their name on a wait list, diners can also order food for delivery or make reservations through Yelp.

The monthly number of diners seated via Yelp Reservations has grown by more than 50 percent year to date. Nowait’s monthly diner tally has more than doubled in the same time frame, Yelp said. Yelp estimates that the Nowait system has saved diners more than 4.1 billion minutes since it integrated the app into its review platform.

However, if there’s no wait at a restaurant, the waitlist will not appear on the Yelp app.

That’s where On My Way comes along. The new feature allows you to let the restaurant know that your party is on its way. If a wait begins to form while you’re in transit, then it will put your party on the top of the queue, Wright said.

“It gives you peace of mind,” Wright said.

On My Way is in test at restaurants in the Bay Area including The New Spot on Polk, K-Elements BBQ, Homeroom, The Monk's Kettle and Iza Ramen Soma. Popular Orange County, Calif., Vietnamese restaurant, Garlic & Chives, which is notorious for having long waits, is also testing On My Way.

“Convenience is more important than ever to our guests,” Garutti said during the chain’s latest earnings call.

Shake Shack said mobile web ordering is just another way to serve guests, and not a “response to app fatigue” among consumers.

The direct web ordering, instead, targets “a more transient guest whom we hope to convert into our app experience,” the company told Nation’s Restaurant News.

The fast-casual burger chain said a nationwide launch will occur “after we’ve sufficiently tested the technology and pickup functionality.”

Pay at the table evolves

Shake Shack might not be responding to app fatigue, but some independent restaurants are finding new ways to streamline ordering and payment without apps.

Matt Blanchfield, co-owner of Ceili’s in Calgary, recently launched Ready at his full-service Irish pub. The Vancouver-based tech company introduced the pay-at-the-table platform at a U.S. tech conference in October.

Blanchfield’s restaurant, which typically does about 350-500 covers at lunch, has been one of the first full service restaurants to give the payment option a trial run.

Ready technology allows diners to scan a QR code to view and pay their bill. No app necessary.

Blanchfield said testing Ready is not about reducing labor. Rather, it’s helping turn tables faster, while allowing the guest to take control of paying their bill. Diners point their camera at a code, and the bill pops up, he said.

It eliminates the diner having to hail a server to fetch their check or bring a payment device to their table.

“We look at this as a tool to help with customer experience and to be more efficient,” Blanchfield said.

Other restaurants in Canada using the technology include Mahoney and Sons and Tap and Barrel Restaurants.

In the U.S., the restaurant industry is seeing more streamlining when it comes paying at the table.

Boston-based Toast, which offers handheld POS systems for restaurants, is giving the industry new options through a partnership with Rooam.

Rooam allows diners to open, view, and pay the bill from their mobile device.

But unlike Ready, Rooam is app-based.

Last week, Square deployed a pay-at-the-table system for restaurants who use its new Square Terminal, a handheld device.

Naama Tamir, owner of Lighthouse restaurant in Brooklyn, is one of a few independent restaurants, already using the tableside terminal.

She said taking payments tableside helps speed up the checkout process. The Square device, whose user interface resembles a cell phone, is so easy to use that servers often leave the device on a table for diners to self-checkout when they’re ready.

“It’s so easy to use, and saves everyone time,” Tamir said.

Correction: Nov. 5, 2018 This article has been updated to correct the list of restaurants currently using Rooam.