/sites/all/themes/penton_subtheme_nrn/images/logos/footer.png
Recent
Recent
San Francisco based Lazy Susan aims to be the Domino’s of Chinese takeout
May 19, 2022
The first NFT marketplace for restaurants could be the next frontier in digital loyalty
May 19, 2022
Subway Cares Foundation™ launches to support communities around the world
May 19, 2022
Trending: Executive shuffles at Brinker, KFC
May 19, 2022
Tina Gantz appointed vice president of franchise development for District Taco restaurant chain
May 18, 2022
Featured
Tech Tracker: Toast launches POS solution for quick-service restaurants
May 17, 2022
Meet 4 emerging NYC concepts
May 16, 2022
Memphis Seoul brings Korean BBQ and Southern cooking to Brooklyn
May 11, 2022
Executives on the move: 13 restaurant leaders with new positions in April
May 03, 2022
Tech Tracker
brought to you by 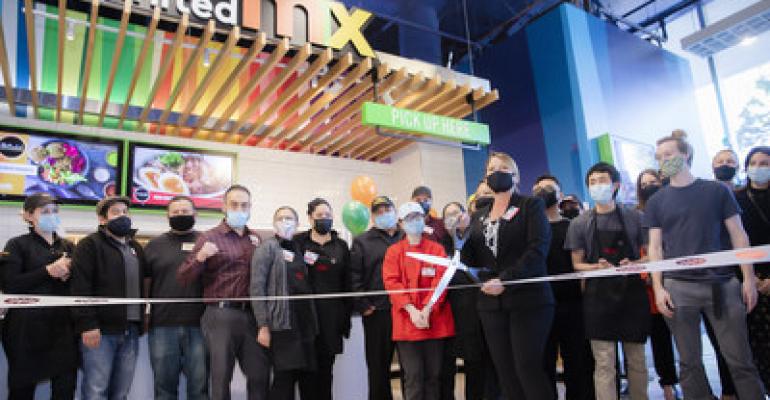 Kroger
Kroger is working with Kitchen United to operate a delivery/takeout and pickup-only restaurant.
Operations>Technology

Third-party delivery services are starting to expand their repertoire beyond local restaurants into groceries, liquor stores and pharmacy runs. Now, cannabis is added to that list as delivery company Waitr announces its intention to acquire cannabis dispensary compliance POS company, Cova in December.

Besides this notable acquisition possibility, the tech space continues to be dominated by rounds of funding for up-and-coming technology solutions companies like Serve Robotics and Flipdish and Kitchen United is opening a restaurant inside a Kroger-owned grocery store.

Related: 3 technology trends that will shape how restaurants function in 2022

Related: What to expect from restaurant technology innovation in 2022

“Cova’s software solution is currently utilized by approximately 2,000 dispensaries in Canada and the United States and will provide an opportunity to offer these retailers regulatory compliant payment solutions and, when and if provincial regulations in Canada and federal and state regulations in the United States evolve, potentially the ability to offer delivery services as well,” Waitr CEO Carl Grimstad said in a statement. “Additionally, we believe that we may be able to adapt the Cova POS solution for restaurants in order to offer our restaurant base an integrated solution for in-house and food delivery services.”

The proposed purchase price is $90 million, though no deal has officially been announced.

Kitchen United is partnering with Kroger-owned Ralphs to open a kitchen-center/delivery, takeout and pickup-only restaurant in Westwood, Calif. Near Los Angeles, the company announced on Jan. 7. The announcement of this first restaurant comes five months after Kroger and Kitchen United unveiled their partnership over the summer.

Customers will be able to place orders via the Kitchen United proprietary MIX platform online, via mobile or at an in-person ordering kiosk. Meals can be picked up in person or be delivered. Shoppers will be able to choose from Fresh Brothers, Bushi by Jinya, Sajj Mediterranean, Doghaus, among other food vendors.

"Our work together provides millions of Kroger customers access to their favorite restaurant cuisines in a convenient supermarket format, while providing Kitchen United and our restaurant partners a high-touch, interactive storefront,” Michael Montagano, CEO of Kitchen United said in a statement.

Additional locations will come to Texas later this month.

The robots are getting smarter. Autonomous sidewalk delivery company, Serve Robotics, announced that its delivery bots have unlocked the next level of autonomy. At level four autonomy, Serve’s delivery robots can operate fully without human intervention and “rely on their own capabilities to ensure safe operation.”

“[This] further enhances public safety by significantly reducing the potential for human error. This milestone begins to unlock the full potential of robotic delivery," said Serve Robotics co-founder and CEO, Dr. Ali Kashani. "This technical and commercial milestone is an achievement for the entire AV industry, and accelerates our mission to make delivery more accessible and sustainable."

Last month, Serve Robotics also announced a $13 million round of expanded seed funding for the company, with investors including Uber, 7-Eleven’s 7-Ventures, and Wavemaker Labs. With the funding, Serve Robotics will scale its operations, expand its robotic fleet, and grow geographically, along with continue to develop new autonomous products.

Like many restaurant tech companies, Flipdish provides a toolbox of digital tech solutions, including QR code ordering and tableside payment, online ordering for pick-up and delivery, self-service kiosks, loyalty programs, and digital marketing capabilities. The global company (which operates in 25 countries, including the U.S. and Canada), also works with ghost kitchen companies.

“Digitization has been transforming the hospitality sector for years,” Conor McCarthy, cofounder and CEO of Flipdish said in a statement. “The ongoing pandemic has further accelerated the trend with hospitality businesses becoming increasingly dependent on digital experiences to attract and retain customers.”

Technology companies keep working on streamlining services to avoid the confusion caused by multiple apps, devices and kiosks in the back of the house. Grubhub announced this month an extended partnership with online food delivery marketplace, Itsacheckmate.

Together, Itsacheckmate and Grubhub will eliminate a manual intermediate step to transfer Grubhub orders from tablet to POS. According to the announcement, Itsacheckmate automatically ingests digital orders and prints them out like in-house orders, eliminating the need for tablets for back of house employees, and further digitizes POS capabilities.

The software and payments solution company, Square (now known as Block, Inc) announced a partnership this month with Ally, a “Software as a service” platform that is designed to help restaurants navigate common digital delivery issues like third-party fees, order delays/errors and customer dissatisfaction. Ally also has a fleet of 90,000 drivers, which will integrate with Square’s existing capabilities like payment processing, payroll integration and loyalty programs, which Ally customers will now have access to.