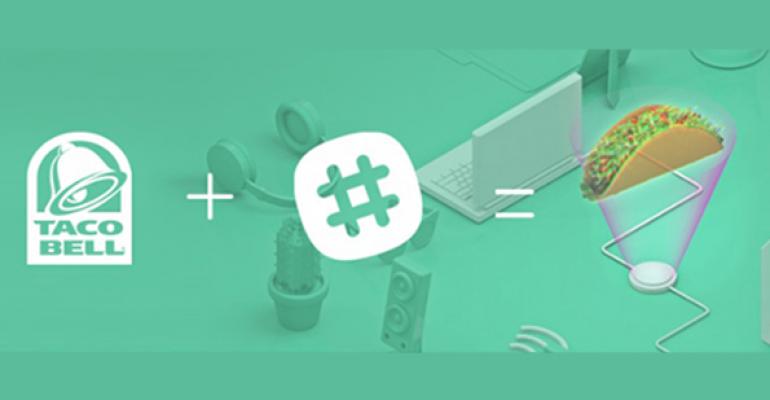 Why open an app when you can order on Slack?

Robots are taking over, but Taco Bell promises it will be delicious.

The Irvine, Calif.-based quick-service chain said Monday that it is experimenting with yet another communications platform that will allow groups and businesses to order from their local Taco Bell restaurant without even opening an app.

An integration with the real-time messaging tool Slack will allow users to order select menu items from Taco Bell without leaving the messaging platform.

“The TacoBot Slack integration is the latest step on our journey to make the brand more accessible wherever and whenever our fans want it,” said Lawrence Kim, director of digital innovation and on demand for Taco Bell Corp., in a media statement.

“Taco Bell is about food tailor-made for social consumption with friends, and that’s why integrating with a social communications platform like Slack makes perfect sense. TacoBot is the next best thing to having your own Taco Bell butler. And who wouldn’t want that?”

The Slack TacoBot, which was created by the chain’s creative agency Deutsch, is currently in beta test with several companies, including SAV Studios, Thought Catalog, Giphy, Fullscreen and FoodBeast, Taco Bell said.

A wider rollout is planned over the next few months.

The partnership allows Slack users to order individually or to organize group orders, as well as payment, the company said, all with the “sharp and witty” personality of Taco Bell and the artificial intelligence of the Slack platform.

The TacoBot will allow Slack users to customize their meals and will make suggestions — or even talk about its favorite movies or how it’s feeling that day, even though it is not human.

The move is Taco Bell’s latest innovation after becoming the first national quick-service chain to launch mobile ordering and payment in 2014. The app has more than 5 million downloads, and the chain has also revamped online ordering through its website ta.co.