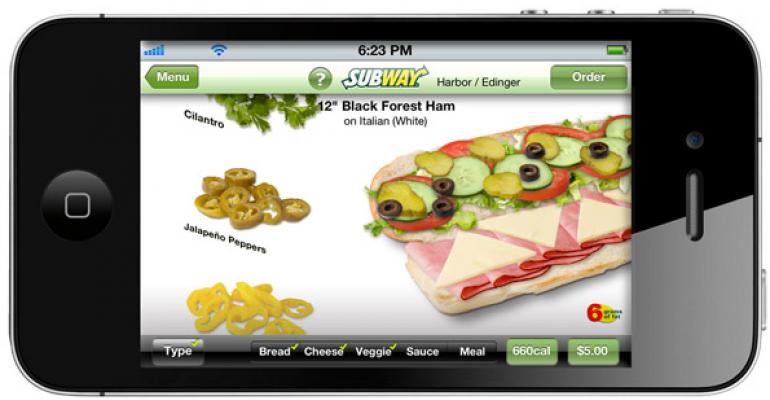 About 2,000 units in California have been testing a mobile app

As a growing number of national quick-service chains move toward mobile ordering and payment, Subway restaurants in California have been quietly testing the services, allowing guests in roughly 2,000 units to skip the line.

Officials with the Milford, Conn.-based chain declined to comment on the test details but confirmed that the chain was watching to see whether customers embraced the idea of using their smartphones to both order and pay ahead.

After an initial test in Orange County, the Subway app has been available to locations throughout California since about March 2013, and about 400,000 customers have downloaded it. Available for both iPhone and Android, the free app was developed by Orange, Calif.-based ZippyYum, a software company that is owned by Subway franchisee Daniel Riscalla.

The goal was to create an app that would replicate the experience guests have in stores with Subway’s highly customizable menu, said Riscalla.

“The app is pretty different from others out there in that it’s very visual,” he said. Guests can build their sandwich and watch it change as they select toppings and melt cheese.

“We were true to the brand experience,” he said. “You see your sandwich made right in front of you.”

In addition, the app recognizes differences within each unit. Not all locations use the exact same ingredients, for example, so guests can select from the fountain drinks or chips the specific store selected might carry.

Guests can choose to have their meals scheduled for pickup, or, if available, delivered.

The time it takes the restaurant to process mobile orders may vary by time of day, depending on the location’s staffing. In a test at a unit in Los Angeles, for example, an order placed at 11 a.m. was ready within 15 minutes. At the same unit during the lunch rush, an order placed at 12:30 p.m. was designated for pickup at 1 p.m.

Because the app allows guests to link their account to a credit card for prepayment, they can simply walk to the register and collect their order when picking up. Some restaurants also allow digital tipping.

Individual locations can also offer other variations. Riscalla, for example, offers a “drop off” option at his unit in Laguna Beach, Calif. Guests can order from the beach or other locations and schedule a delivery via Smart Car “bus,” which makes scheduled drops at various sites around town, including popular beaches, hospitals, office buildings or schools.

“People wanted to order sandwiches on the beach, but they didn’t want to have to pay a $5 delivery charge for a $5 sandwich. This allows us to pool orders for delivery,” he noted, rather than charging a fee or requiring a $10 minimum order.

Riscalla said his staff put a lot of effort into promoting mobile ordering in his three restaurants when the app was first introduced last year, and there was much education needed.

Now, he said, customers are much more accepting of the technology, and they are adopting it more quickly. He estimated that about 15 percent of his sales come from mobile orders, and sales overall have improved because of faster through put and improved order accuracy.

Still, the 400,000 downloads throughout California so far indicates the adoption rate is “not very high,” he said. “The biggest problem is that most people don’t know about it.”

Meanwhile, Subway corporate is also working with mobile payment firm Paydiant Inc. in developing a payment system that may be rolled out systemwide, and Riscalla said ZippyYum is part of that effort.