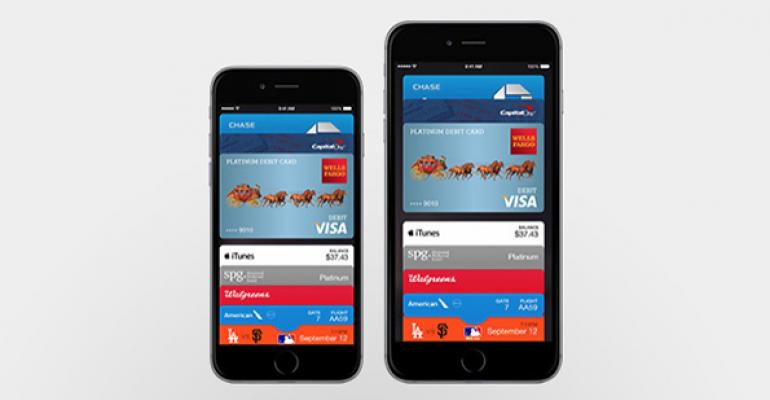 Most McDonald’s, Subway and Panera Bread units will be among the 220,000 retail locations accepting the new smartphone payment, which is preloaded on Apple’s latest iPhone 6 and iPhone 6 Plus devices. Several dozen independent restaurants will also accept Apple Pay through the OpenTable reservations service.

"We think it is going to be profound,” Apple chief executive Tim Cook said at a product event Thursday in Cupertino, Calif. “It's going to change the way we pay for things.”

Using near-field communication, or NFC, and the iPhone’s TouchID fingerprint sensor, users can pass their iPhone 6 over a point-of-sale device reader to complete a secure transaction.

Apple Pay will be accepted at the counter and at the drive thru “in virtually all” of McDonald’s 14,000 U.S. restaurants, according to a statement in September from the quick-service operator. The company advised that “a handful” of locations wouldn’t be able to accept Apple Pay initially, “but over time that will be worked out.”

McDonald’s said customers can hold their devices near the contactless NFC reader while keeping a finger on the iPhone 6’s TouchID to pay at counters and drive thrus.

Users’ payments will be charged to a credit or debit card on file from their iTunes Store account.

“McDonald’s and its independent franchisees invested in NFC technology for restaurant point-of-sale systems as part of the company’s digital strategy and commitment to customers’ emerging needs,” the company said in a statement. “McDonald’s will continue to add mobile payment capability at restaurants worldwide.

“We’re excited to see the mobile payments industry reach a potential inflection point,” Rafiq said. “As the technology catches on, McDonald’s will be well positioned to leverage the investments we’ve made around the world.”

Apple said Subway, with more than 26,000 units in the United States, will participate in Apple Pay, though the sandwich chain has not discussed the initiative publicly.

Panera Bread’s more than 1,800 units “are ready for the launch of Apple Pay,” Blaine Hurst, Panera’s executive vice president of technology and transformation, said in an email.

“We’ve been hard at work to enhance the guest experience through our Panera 2.0 initiatives,” Hurst wrote, “and Apple Pay will offer yet another seamless and safe way to pay.”

Starbucks said it will support “in the coming months” an in-app version of Apple Pay, which the company said will be primarily for loading and reloading its proprietary Starbucks Card app.

“It won’t be available Monday, but we are looking forward to integrating that,” said Maggie Jantzen, a Starbucks spokesperson.

Jantzen said the brand’s 12,000 U.S. locations do not have the required NFC technology to accommodate Apple Pay.

“We currently are unable to accept those payments in our stores,” Jantzen said.

Chipotle spokesman Chris Arnold said the 1,700-unit Denver-based fast-casual chain isn’t using Apple Pay yet, and the company has “not made decision as to whether we will or not.”

Philadelphia-based contract foodservice provider Aramark said Thursday it will pilot Apple Pay at some hockey arenas this season, as well as Softcard, an NFC-based payment system that is a joint venture of AT&T, T-Mobile and Verizon. Softcard rebranded from Isis in September.

“Apple Pay and Softcard represent the latest advancement in mobile payment technology, and we are excited to integrate them with our payment platforms,” Marc Bruno, chief operating officer for Aramark's sports and entertainment division, said in a statement.

The program has launched at some independent restaurants in three cities: New York, San Francisco and Washington, D.C.

“With Apple Pay, OpenTable app users can skip adding a card to their profile and simply settle their check with a single touch … saving diners even more of their precious time,” Matt Roberts, chief executive of OpenTable, said in a statement.