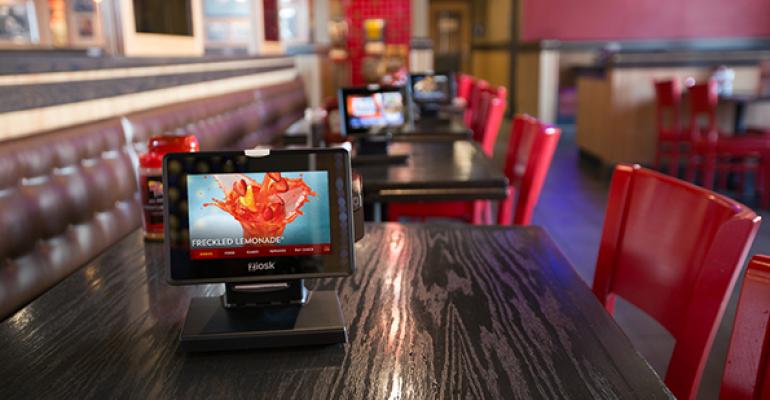 Introduction of ordering, payment technology aims to build on momentum

Red Robin Gourmet Burgers Inc. will roll out touchscreen Ziosk tablets systemwide this year, allowing customers to order and pay on their own timing, the company said Friday.

The Ziosk tablets are part of Red Robin’s ongoing effort to improve the customer experience and remove the “pain point” of waiting for a check at the end of the meal, said CEO Steve Carley.

The casual-dining chain has been testing various tablets over the past two years, but settled on the Ziosk brand.

The seven-inch tablets let customers order meals and request refills, pay at their leisure, and play interactive games. They can also enroll in the chain’s Red Robin Royalty loyalty program and redeem awards, as well as provide real-time feedback.

Dallas-based Ziosk is also providing touchscreen tablets to about 1,350 other restaurants across the country, including Chili’s, Smokey Bones Bar & Fire Grill and Abuelo’s. Other casual-dining chains, including Applebee’s and Johnny Rockets, are rolling out tablets developed by E la Carte Inc.

The company has been gaining momentum with the completed remodels of 104 restaurants under its Red Robin Gourmet Burgers & Brews brand — which has a more contemporary design that moves away from the “big, noisy bars” of the past — to restaurants that appeal to customers for all occasions, from date night to watching the game at the bar, Carley said.

Another 125 restaurants are scheduled to be remodeled this year, which Carley predicted will continue to drive traffic in 2015.

The company has projected a same-store sales increase between 2 percent and 3 percent for 2015. It is also planning to open 20 new Red Robin units, along with five of its fast-casual Red Robin Burger Works brand.

Red Robin had marketing success in its fourth quarter by refocusing on the everyday value of its Tavern Double burgers and bottomless fries, for $6.99, along with its premium Red Robin’s Finest burger line, with items priced closer to $14.

Last year’s promotion of dinner and a movie featuring the latest in “The Hobbit” series was also a hit. Coming this year is another promotion, with the latest in the “Paul Blart Mall Cop” series, which is expected to be popular with families, said Denny Marie Post, Red Robin’s chief marketing officer and senior vice president.