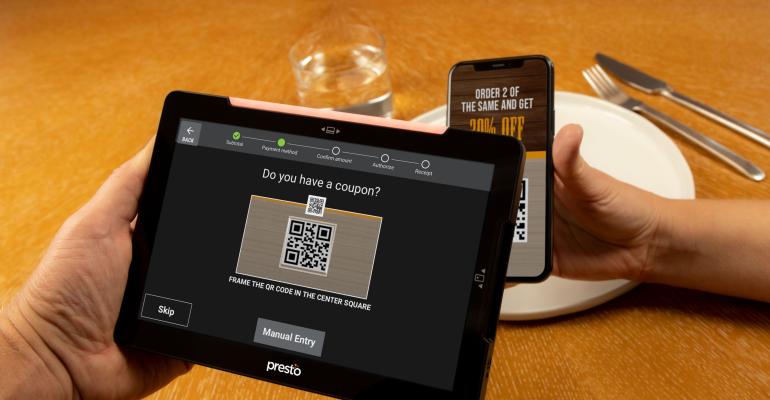 Labor automation company Presto became the latest restaurant technology company to go public this week, with an initial public offering of $120 million from a merger with special acquisition company, Ventoux CCM Acquisition Corp. The restaurant tech space has been hot this past year, from unicorn IPOs to a flurry of fundraising and M&A activity from smaller tech startups. It only made sense for Presto — which has made a name for itself in labor tech solutions over the past 14 years — to join the throng.

“As the next step of our evolution and maturity, going public seemed like the right step, because a lot of our customers are public companies,” Presto CEO Raj Suri told Nation’s Restaurant News. “When you’re making the decision to have tech implemented at each of your thousand-plus stores, it helps to know that your counterpart is also well-capitalized, well-governed and not a fly-by-night startup.”

Suri started Presto 14 years ago after working as a waiter during the peak of the 2008 recession and has since tried to move the industry forward toward improving the guest experience through labor automation tools. The next step in their evolution was completing a previously announced merger with Ventoux CCM Acquisition Corp. on Sept. 21, raising $120 million, less than analysts had initially hoped, though Suri is not too worried about macroeconomic challenges that might influence the valuation of his company.

“I think hospitality tech was seen as a niche thing that didn't really have a lot of upside,” he said. “But now, I think that's totally changed. The recognition that this is a fast growing space, despite the high-inflation environment we’re currently in, is huge.”

As a result of so many hospitality tech companies raising more money and going public, Suri understands why so many of them have tried to become more end-to-end solutions for restaurants instead of just specialized plugins or one-offs.

“Over time, we've become broader,” he said. “But at the same time, we keep going back and forth on if we want to become the whole platform, or do we just want to own a specific piece of it? […] I think it really depends on the situation[…] sometimes we don’t need to get into a space because there are other good companies doing it. But if we see an opportunity, and a gap in the market, in say, robot tech--  we might go after it.”

Moving forward, Presto will make a lot of moves in the restaurant space through acquiring other smaller brands, and Suri hinted that Presto will have more to announce on that front in the near future. Moving forward, Suri wants Presto to be a leader in moving the needle forward on what restaurant tech companies are capable of, in terms of providing solutions for the industry.

“We believe the restaurant industry is ripe for transformation, and not just with labor automation, but things like personalization of guest experience, speed of service and analytics,” he said. “Why can’t restaurants be operated as intelligently as web businesses like Amazon and Netflix? Why can’t you run a physical commerce business as efficiently as ecommerce? We want to bridge the gap between physical and digital industries.”
Contact Joanna at [email protected]