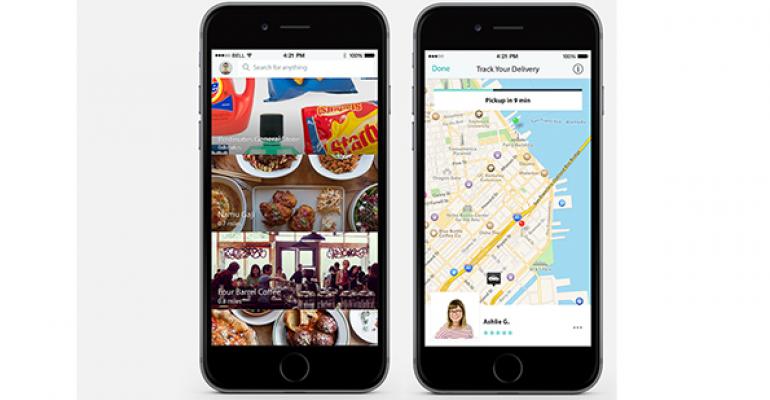 <p>Postmates, which was founded in 2011, has expanded to deliver food, groceries, more. Photo: Postmates</p>
Operations>Technology

San Francisco-based Postmates, an on-demand delivery startup, has taken an early lead in the delivery game as foodservice brands seek to get their products into the hands of consumers.

While not exclusively devoted to restaurant delivery, the four-year-old Postmates has grown to a fleet of 10,000 couriers in nearly 60 cities, and signed such big-name partners at Chipotle Mexican Grill Inc., McDonald’s Corp. and Starbucks Corp.

“We started with food,” Holger Luedorf, Postmates senior vice president of business, told Nation’s Restaurant News. “If you can deliver a hot meal or cup of coffee, you can deliver anything. Prepared food makes up 85 percent of our deliveries today.”

And Postmates has added something extra to Chipotle’s burrito sales.

Mark Crumpacker, Chipotle chief marketing and development officer, said in a call with analysts on April 21 that Postmates-delivered coffee is growing.

“We are seeing a 30-percent month-over-month growth on those orders, and we have not publicized this,” Crumpacker said. “So there is a tremendous amount of potential for individual orders, but it’s a little bit too early for us to predict what long-term impact that will have.”

Chipotle’s deal with Postmates calls for capping the delivery charge. Usually, consumers pay a delivery fee that varies based on the distance a courier travels.

Typically, Postmates charges a delivery fee, which starts at $5 and escalates based on distance and “the capacity of the platform,” along with a 9-percent service fee that is applied to the purchase price.

Postmates, which was founded in 2011, has expanded to deliver food, groceries, office supplies and other retail goods for smartphone users who have the Postmates app. The segment has drawn such competitors as Amazon Prime Now, Square, Caviar (which was acquired last year by Square), DoorDash, GrubHub, Uber, WunWun and Yelp.

The company has raised about $58 million in rounds of funding. That includes the most recent Series C round that drew $35 million from existing investor Spark Capital, TechCrunch reported in February, with sources putting the value of the company at between $150 million and $200 million.

Starbucks announced its partnership in March, calling Postmates the “leading on-demand delivery service.” Chipotle also named Postmates its “official delivery partner” in March, and said the company was “delivering Chipotle orders in all of the markets where they operate.”

McDonald’s revealed its Postmates test in early May, starting with 88 restaurants in New York City.

“We look forward to learning from this test and continuing to innovate as we offer our customers everyday conveniences and new ways to experience our brand,” Vander Ploeg said.

"This is a city where delivery is a way of life," said Mwaffak Kanjee, vice president, general manager of the McDonald's New York Metro region. "We are excited to launch this test so our customers can get hot, freshly prepared food right from McDonald's kitchens, when and where they want it." Delivery is available for McDonald’s full menu, except for ice cream cones.

Luedorf of Postmates said the founders created Postmates in 2011, “with the mission to power local, on-demand logistics focused on fast deliveries from any type of merchant at scale. It also highlights the notion that buying locally scales globally.”

Luedorf said big restaurant brands were drawn to Postmates’ number of couriers and its presence in major metropolitan markets.

“The larger chains chose us because of our fleet size and ability to scale,” Luedorf said. “They did the due diligence and saw that we could outperform any of the companies in our space.”

“We drive a lot of demand to restaurants and retailers through the Postmates app,” he said. “Because we are an e-commerce platform, there isn't a need for us to be deeply integrated with the retailer and we give brands the ability to offer their customers delivery without them having to build out their own fleet.”

“We will continue to expand markets, support strategic partnerships and continue to add new features and functionality to our product,” Luedorf said.