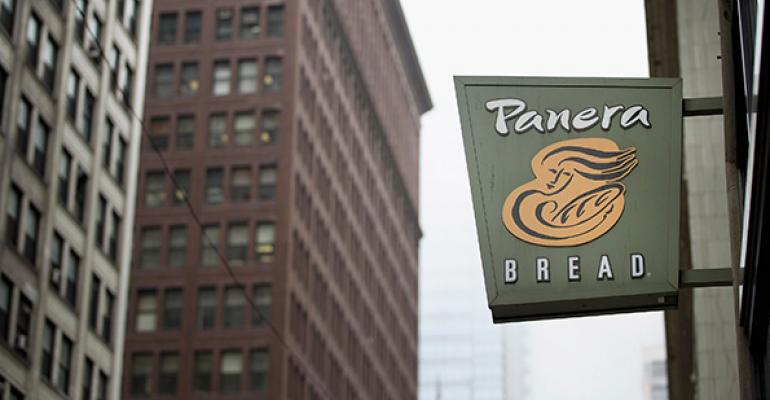 Customers increasingly want to engage with restaurant brands and retail in general on digital platforms, Shaich said. Digital use at Panera has been growing, he noted.

Shaich said Panera 2.0 is aimed at improving the bakery-café experience and reducing guest friction with digital access through smartphones, the Internet and in-store kiosks, and also operational integrity to produce quality and quantity of food.

Shaich said the company compares same-store sales between Panera 2.0 units and those that have not been converted. “Each week Panera 2.0 comps materially exceed Panera 1.0 comps,” Shaich added. “I would also note we are seeing increased frequency in Panera 2.0 stores, especially among those converted for a year or more.”

Panera management was “bullish” on Panera 2.0’s ability to lift same-store sales and provide return on investment, David Tarantino, an analyst with Baird Equity Research, said in a report Wednesday. He also cited the company’s emphasis on delivery, which it sees as a “huge opportunity based on very strong demand/ROI in tests.”

Panera is looking at a number of different delivery options, Shaich said, including its own drivers, as well as third-party services. “We’re delivery agnostic, with our criteria being that whatever approach we choose must offer the greatest probability of a differentiated experience for the guest and ultimately the best life-cycle economics for the shareholders,” he said.

Delivery is “materially lighter” than the move toward Panera 2.0 because it does not require physical changes in the restaurants and staff retraining, Shaich added. Those conversions have required Panera “to build up a machine literally to convert 2.0s,” he said. Delivery also requires very little capital and lighter technology costs, he noted.

New units that open with the Panera 2.0 format include such elements as a single point of pickup, technology such as kiosks and, depending on the market, the delivery-to-table service.

Shaich said much of the Panera technology was developed outside the company, with the company’s main investment in the integration of that digital package.

Shaich also said during the call that Panera took a 1.1-percent retail price increase in August, bringing the increases to 2.1 percent for the quarter to offset wage, benefits and food inflation.

“We believe we can effectively take price to cover inflation, particularly when competitors are doing the same thing, which is what we are seeing when we see minimum wage increases,” Shaich said. “We will be tactical in execution but strategic in our approach.”

On Tuesday, Panera reported that net income fell 17.4 percent during the third quarter after charges for refranchising and tax adjustments. The bakery-café operator reported profit of $32. 4 million, or $1.27 per share, compared with $39.2 million, or $1.46 per share, in the prior-year quarter. Revenue in the quarter rose 7.2 percent, to $664.7 million, from $619.9 million in the same period last year.

Same-store sales at company-owned restaurants grew 3.8 percent in quarter. The company said that in the first 27 days of the fourth quarter, same-store sales rose 3.4 percent.

As of Sept. 29, Panera had 1,946 restaurants, with 931 of those owned and operated by the company and the remainder franchised.