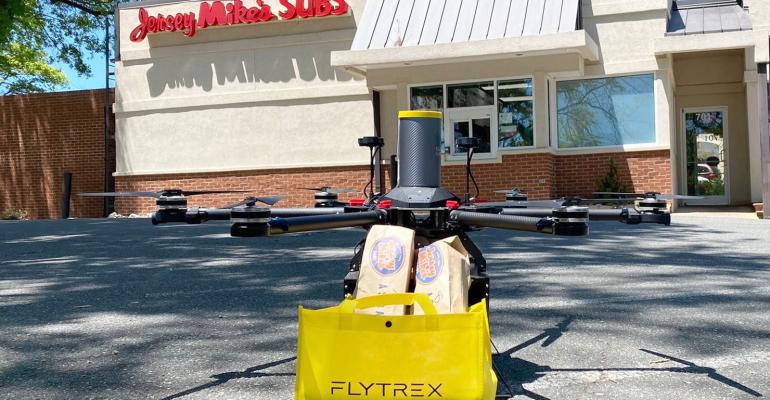 The companies said orders would be delivered in five minutes in a limited area in the town southwest of Raleigh. N.C.

Tel Aviv-based Flytrex has teamed with Dallas-based Brinker International Inc., parent to Chili’s Grill & Bar and the virtual It’s Just Wings brands among others, to deliver orders by drone in several markets.

In late March, Brinker said it would expand its drone-delivery pilot with Flytrex that began in October 2021 in North Carolina. Brinker and Flytrex said ultra-fast delivery, in under five minutes, would be extended to Granbury, Texas, a community southwest of Dallas-Fort Worth.

Related: How Jersey Mike’s plans to open over 500 locations in 2 years

“Partnering with Flytrex, we’re thrilled our fans can enjoy the freshest sub sandwiches flown directly to their backyards – it truly is a sub from above,” Scherer said.

Flytrex said it will operate the Jersey Mike’s service in cooperation with Causey Aviation Unmanned under a Federal Aviation Administration waiver that allows a delivery radius of one nautical mile – potentially reaching thousands of homes. A nautical mile is about 1.2 statute miles or about 6,080 feet.

Orders are placed on the Flytrex smartphone app, which updates customers on order status along the route until the package is lowered by wire into their yards..

Flytrex has been operating in North Carolina since September 2020, beginning in Fayetteville and expanding to Raeford.

Flytrex said its delivery service is now available to 10,000 homes across North Carolina and Texas.

“We’re excited to team up with Jersey Mike’s to deliver subs throughout the skie of North Carolina and look forward to expanding our partnership everywhere they deliver their delicious food,” said Yariv Bash, CEO and cofounder of Flytrex.