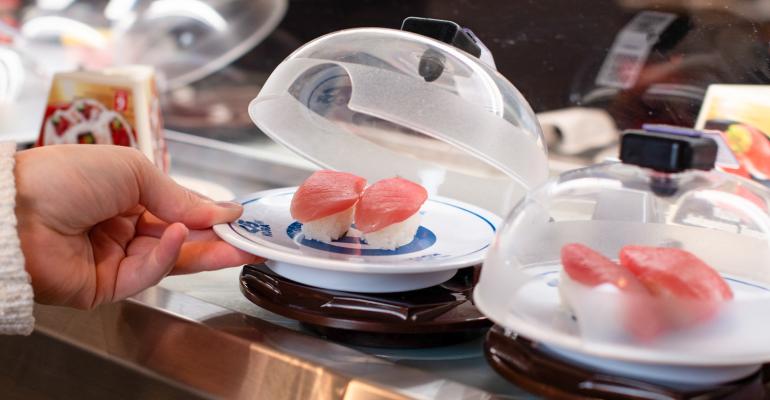 How do you combine automated technology with hospitality? Just ask Kura Sushi

Many restaurants are scrambling to figure out how best to integrate automation technology without sacrificing the human experience, but casual-dining chain Kura Sushi — with 500 locations in its home country of Japan and 42 U.S. locations with headquarters in Irvine, Calif. — has been perfecting the balance of hospitality with technology for years-- utilizing conveyor belts, robots, gamification, and automation to bring sushi dining into the future.

Here's how the Kura Sushi experience works: Customers check in and add themselves to the waitlist on the Kura app. Then, once guests arrive, they are ushered to their table, and can immediately choose to take one of the sushi plates going around on the conveyor belt. Unlike other conveyor belt sushi restaurants where the conveyor belt runs along the perimeter of the room, Kura Sushi designed it in an E-shape so that it could reach as many people as possible.

Each table also has a tablet from which you can order additional items from the kitchen, which arrive to your table through a second “express highway” conveyor belt. Any drinks are delivered by the Kura robot, powered by Pudu Robotics, which Kura Sushi U.S. vice president of system and menu development, Hideto Sugimoto said is more for entertainment purposes than labor-saving purposes.

When guests are finished eating, they put their plates in the tableside plate disposal, which counts the plates and brings them via a water panel running underneath the conveyor belts to the dishwashing station. The water is circulated and reused once every 3-4 hours, so it’s also environmentally friendly. Customers can then choose to pay tableside or wait for a server to come over to settle the check.

“I think still to this day, majority of the conveyor belt sushi concepts will still have you stack up plates after you've finished and the servers will have to come and manually count them,” Sugimoto said. “Oftentimes, it’s done by color or shape and they all have different prices. In our case, all of the plates are the same price. […] There has been a major acceptance in the U.S. market [of automated technology]. You don’t even have to wait until the end of the meal to dispose of the plates.”

Kura Sushi also patented a freshness system called “Mr.Fresh” which covers all food under plastic domes until a customer reaches for a plate and then they can lift the lid to reach for a dish. Mr.Fresh is also equipped with RFID tags, which can track how long a dish has been on the belt (to ensure freshness) and, in certain places, which dishes are being consumed.

Almost all of the technology in use at Kura Sushi is proprietary and was developed in-house, except for the payment system and robot servers. There is even automation in the kitchen, with automated rice bowl makers, rice cookers, rice washers, and even a machine that mixes the vinegar with the sushi rice to get it to the right flavor and consistency.

“We're able to save a lot of labor on the kitchen side compared to a traditional sushi restaurant, and that savings will be reinvested into the quality of the food items that we serve,” Sugimoto said.

Another key aspect to the Kura Sushi experience is the gamification of eatertainment aspect. In Japan, for every five plates consumed, customers are invited to play a game to get the chance to win prizes. But in the U.S., where gambling laws are different, Kura had to tweak the experience to offer a prize (usually a toy) to every customer for every 15 plates consumed.

But despite the fun interactions with the technology, Sugimoto said that Kura Sushi does not want customers to feel like they’re only interacting with machines.

“We do have servers, and since our concept is very fast-paced, so the servers need to constantly be bussing tables and serving them at the same time,” Sugimoto said. “The robots and automation just take some tasks away from them. […] We don’t want our guests to feel like they’re in a completely self-service restaurant.”