/sites/all/themes/penton_subtheme_nrn/images/logos/footer.png
Recent
Recent
John Fuller named CEO and president of Wahlburgers
May 28, 2020
Popeyes’ same-store sales up more than 40% in third week of May
May 28, 2020
Trending this week: How restaurant reservations are changing in the wake of COVID-19, and more on Golden Chick's new chicken sandwich
May 28, 2020
Guest sentiment toward off-premise recovers in late May, Black Box says
May 28, 2020
DoorDash adds e-commerce ordering platform aimed at independent restaurants
May 28, 2020
Featured
House overwhelmingly passes bill to extend Paycheck Protection Program and make it more flexible
May 28, 2020
Boston Market COO Eric Wyatt on putting people first in times of crisis
May 20, 2020
Lawmakers debate improvements to federal Paycheck Protection Program loans
May 22, 2020
CDC updates guidelines for reopening restaurant dining rooms and bars
May 21, 2020
Future of Food
brought to you by 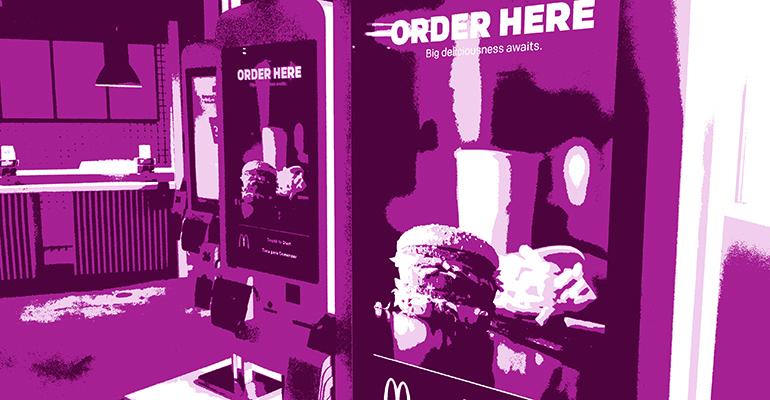 McDonald's
McDonald's wants customers to be able to order their Big Mac, fries and soda via kiosk at 14,000 domestic locations by 2020.
Operations>Technology

Future of Food: Kiosks will take your order

Probably not, but the industry is moving toward a future in which more guests place orders on computer screens inside restaurants.

Some of the world’s biggest restaurant chains are moving in that direction. McDonald’s, the largest of the bunch, has been adding kiosks in international markets for years.

McDonald’s wants to expand its “Experience of the Future” model, which includes kiosks, in most of its 14,000 domestic locations by 2020. And its competitor Wendy’s plans to add kiosks in 1,000 locations by the end of the year.

The efforts follow fast-casual operator Panera Bread, which added kiosks at its 900 company-owned locations in its “Panera 2.0” model, which includes online ordering and other features.

Smaller chains are also following suit. Fast-casual BurgerFi has tested kiosks at one of its 91 restaurants. And seven-unit Eatsa, the San Francisco-based healthful-food concept, doesn’t have employees to take orders at all — just kiosks.

Kiosks have entered the debate over rising minimum wages. Many see them as a natural result of higher labor costs. In theory, kiosks can result in chains employing fewer workers.

But efforts so far appear to be mostly at the top line. Restaurants see kiosks as a way to improve service, with faster ordering and fewer mistakes. Consumers are more relaxed at kiosks and tend to order more items.

At Panera Bread, same-store sales at company-owned restaurants, where kiosks are prevalent, increased 4.2 percent in 2016. At franchised locations, which have been slower to add the technology, same-store sales rose 0.7 percent.