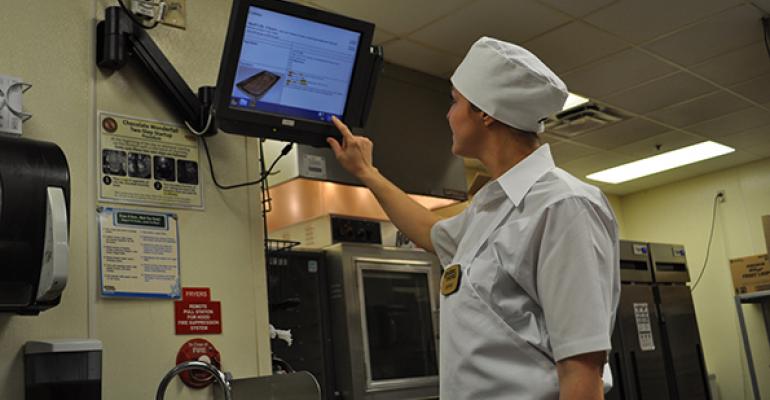 Equipping the back-of-house to save labor

With new equipment and technology, restaurants simplify to trim time

Restaurant companies are always concerned about labor, but continued improvements in the economy and wage pressures have made them take a long, hard look at what equipment and technology can do to save work hours.

With the national unemployment rate dipping below 5 percent for the first time since 2008, and wages increasing in tandem, restaurants chains are looking for equipment investments that will save hours across their systems.

Manufacturers are meeting those needs with streamlined, multi-purpose equipment, as well as layers of computing power.

“We are always looking at two things,” said Ric Garcia, director of food and beverage at Carlsbad, Calif.-based Islands Restaurants. “We look at the return on investment as well as the labor savings.

As wages inch up, both from the cost to attract talent and from local minimum wage increases, the needs have become more acute.

“Labor savings is such a huge thing right now,” said Garcia. “Everyone is trying to figure out how to do it with minimum wages going up. Our biggest challenge is finding a workforce that meets the skill set we need.”

Garcia said labor pressures are among the most intense he’s seen in his more than a dozen years with Islands Restaurants. At the 34-year-old brand, for example, the back of the house employs 20 to 25 workers for the units, which range from 3,500 square feet to 5,500 square feet.

“For being around so long, we tend not to want to give up our old-school methods that we’ve been using,” said Garcia  “That’s a challenge.”

Here’s a look at some of ways restaurant brands are adopting and adapting new equipment and technology in the back of the house.

“Anything you can do to reduce one employee in your kitchen, it’s something people are trying to do these days,” said Belliveau. “But a lot of the new equipment and technology also helps speed of service as well as consistency, which are both important. It’s plusses all the way around.”

New equipment for the brand ranges from fast ovens to recipe management, he said.

World of Beer is expanding, having grown to 76 units, with another 35 expected this year, as well as its first international location to open in Shanghai.

Up until May 2013, the brand had a limited menu and ventless kitchens, but it introduced its first full-menu later that year and began retrofitting all the older units, Belliveau said.

“We were having a lot of issues keeping communications consistent across all of our stores,” Belliveau said, “especially because everything was happening so quick with the food program.”

World of Beer implemented a “tavern fare” food program in 2013, and in January of last year began rolling out a FusionPrep system.

“Having all that at your fingertips is amazing,” he said. “It’s a one-stop shop for everything in the kitchen.”

But it’s especially helpful for a menu that changes often, Belliveau added.

“By having all the recipes in one place, it helped alleviate some of the issues we were experiencing,” Belliveau said. With the centralized repository and electronically accessed, “everybody was seeing the same thing,” he said.

World of Beer decided on the FusionPrep system, which fit well for the concept, Bealliveau said. “At the time, we were going through a lot of recipe evolution along with evolving the brand and at the same time were improving the craft of our food.”

With the changes, he said, the brand was changing recipe cards frequently. “We would have had to print them in color, get them laminated, get them bound,” he said. “At any one time, it would cost $300 [per unit] to print a whole recipe deck of 75 to 100 cards. We took away that cost and also gave us the peace of mind that we had the most recent recipes available and in front of our cooks at a moment’s notice.

“The same thing goes for recipe adjustments. If we want to change, say, a teaspoon of salt in a recipe, I can do that on my phone, on my tablet or my computer. As soon as I hit ‘save,’ the next time someone looks at that recipe they see the adjustment,” he said, adding that the system sends notifications to units as well.

Before the FusionPrep adoption, World of Beer was printing recipe decks every three to four months, so it was costing about $900 per year per unit.

The restaurant also changed the equipment to prepare the recipes. Belliveau said advances were made with a CVap cook and hold oven by Winston Industries. CVap stands for “controlled vapor technology,” which provides precision control over a food's temperature, moisture and texture by controlling not only air temperature, like traditional warming appliances, but also using controls to maintain the food’s moisture.

“It really helps us save money because we no longer burn anything,” he said. “It has preprogrammed settings in there that enable us to control the temperature of the product. We can cook cases of chicken wings at a time and bake them off to 165 degrees. It doesn’t matter if it’s on the edge of the pan or the center of the time, they come out perfect.”

As a time saver, the oven has a timed setting, Belliveau said. “If you have a big party come, we can load it up with burgers and chicken breasts and hold for up to 30 or 35 minutes and they are perfect, like they just came off the grill.”

World of Beer has also invested in combination convection-microwave ovens, which can cook, brown and warm foods up to 15 times faster than a conventional oven.

“You can fine-tune it to cook a piece of salmon to a perfect medium to cooking sausages and bratwurst to toasting sandwiches and breads,” Belliveau said of the Merrychef E4 ovens it purchased. “The time savings on that is pretty huge. It can cook flatbreads in a minute and half, whereas in a standard oven you’re talking close to six or seven minutes to get that out.”

Garcia of Islands Restaurants said the company is rolling out new Anliker food processors that are expected to save considerable time in the year ahead.

“It gave us a great opportunity to save about an hour of labor a day,” Garcia said. “It also has a lot of safety features for it that are good from a workmen’s comp perspective.”

Garcia said the chain is saving one and a quarter hours per day per unit as the food processors replace two pieces of equipment: a cutter for lettuce and a separate slicer. “This is a two-for-one,” he said.

Over Islands’ 55 restaurants, the savings of an hour and half a day in kitchen labor “will be saving us a quarter of a million dollars for the year,” Garcia said.

Islands Restaurants began installing the new food processors in some restaurants in January, Garcia said, “and it will take us about a month an half to complete.”

“There is such an importance on saving hours,” Garcia said.

“In our process of looking at equipment, we also look at what makes it easier for the staff,” Garcia said in an interview. “We want to make operations more efficient as well as taking some of the payload off the staff.”

Like World of Beer, Golden Corral Corp. was looking to increase consistency and settle on a web-based program for recipe management throughout its 478-unit system.

“We’ve input all of our recipes into it,” Lisa Schweickert, vice president of training for Raleigh, N.C.-based Golden Corral Corp. “If I’m a baker, I can go to the viewer, hit the bakery tab and it breaks recipes down by items. Then I can pull up the recipe.”

Golden Corral had printed recipe books on a quarterly basis for regions and then went to the time and expense of mailing them to individual units. “In between, you would get recipes changed or new one released, and it became difficult to always ensure they were in front of the co-worker,” Schweickert said.

Restaurants have a minimum of three of the screen units in the kitchen, and some have more, Schweickert said.

The devices have also allowed Golden Corral to launch promotions, such as the “Premium Weekends” menu introduced on Feb. 8, which feature new items such as prime rib, butterfly shrimp and honey-teriyaki-glazed salmon for a price of $13.99 in most markets, up from the classic dinner buffet at $11.99.

“Recipes can be modified, added or changed at headquarters,” Schweickert said, “and those are highlighted so everyone knows what’s new.” The new information shows up immediately in each of the 487 Golden Corral restaurants, she said.

The training department has saved many hours by not having to collate and send out the recipe books, she added, “but it’s really about ensuring the consistency and that co-workers are all working from the same recipe.”

Garcia said his best advice for operators seeking to change or modify equipment — be it to reduce labor or otherwise — is to include back-of-house workers in the decision-making process.

“The best advice I could give is to take all the equipment ideas to your back-of-house employees for their feedback,” Garcia said. “My job is to save money for the company, but including your people into the decision making process helps. It also helps get their total buy-in for what you are doing.”