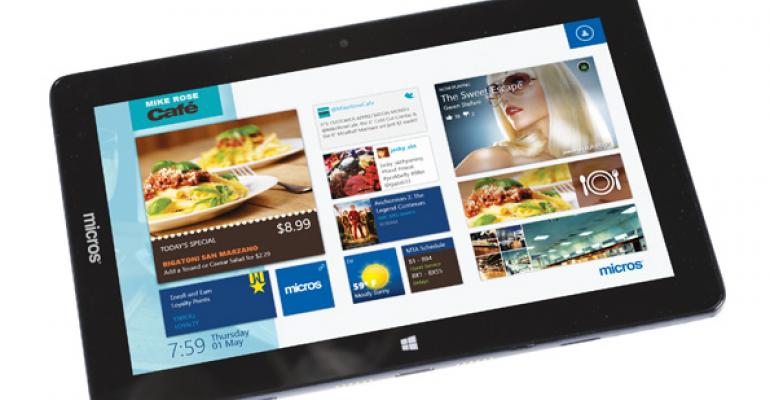 Restaurant suppliers leverage technology to enable operator efficiencies, enhanced customer experience and customization when it comes to the latest trends in restaurant equipment.&nbsp;

As restaurant operators seek to trim expensive real estate costs with smaller footprints, improve operations with intuitive technology and seek to enhance the customer experience, the equipment they employ is getting smaller, smarter and more social.

“Equipment manufacturers, from fryers to grills to ice machines, have really made advances over these last two or three years in technology,” said William H. Bender, founder and principal of the San Jose, Calif.-based W.H. Bender &Associates consultancy and co-host of “Rock My Restaurant” on the Foodable Web TV network.

Bender cited Scotsman ice machines and Vulcan fryers, which “have technology worked into their design and use for operators that is going to far surpass anything they’ve had in the past.”

The fryers are moving toward all-digital control panels and no knobs so temperatures can be set precisely, Bender said.

“That gives the operator a lot more control for each product that’s programmed in, with specific temperatures and specific timing,” he said.

In the case of ice machines, technological diagnostics automate the process of warning restaurant operators when problems are likely to occur.

“Improvement in the program for repair and maintenance makes for less downtime,” Bender said. “The advanced warning is a lot better than having your ice machine break down at 7 o’clock on a Saturday night.”

All the innovations, Bender added, “help the operator have a better product, and also improves their return on investment because of the technology factors that have been worked into the equipment.”

Several equipment innovations were exhibited in May at the National Restaurant Association’s annual show in Chicago, where David Laborde, director of product development at the 32-unit Houston-based Salata chain, was gathering information for a new point-of-sale system.

“The main criteria we are looking for is customization,” said Laborde, who echoed what many operators were saying. “Like everything Salata does, we want to make it our own.”

Innovations in equipment are enhancing restaurant operators’ abilities to customize their offerings, even in the growing area of craft beer.

Global BeerCo USA Inc., for example, has introduced a shiny Housebrew system, which allows restaurants to offer their own on-premise-brewed beers in a 10-by-10-foot space.

Colin MacLennan, vice president of Reno, Nev.-based Global BeerCo said restaurants in California and Ohio are installing the Housebrew system. The systems can cost in the ballpark of $57,000 and produce 500 liters, or 1,400 12-ounce servings, of beer a week.

Housebrew executives say the design and operation of its system designed for restaurants “is different from a typical brew-pub brewery and, most significantly, many of the regulatory and environmental impact considerations [that] are legitimate for brew pubs do not apply to Housebrew units.”

MacLennan said the systems also allow restaurants to create their own “different and unique” beers — such as a pumpkin-flavored brew in October — or vary their house brews throughout the year.

Expanding seasons for dining al fresco is the goal of other new equipment, including a just-introduced portable air cooler for summer that, with a 24.5-inch-square base, occupies nearly the same footprint as well-established propane-powered heaters for cooler months.

Center, Texas-based Port-A-Cool has developed an evaporative cooler called the Islander that chills air as much as 30 degrees Fahrenheit in a 14-foot radius of the 89-inch tall unit, without the dampening complications of water misters. Company officials said each $2,495 unit uses about the same electricity as a household toaster.

Extending menus without consuming a lot of space has led to the dramatic growth in fast-casual pizza. As the segment grows, more operators are looking for ventless and smaller ovens, and manufacturers are meeting the demand with new versions of impinger and convection ovens.

Ovention, for example has introduced a ventless impinger oven that converts from a one-item shuttle to higher-volume conveyer mode at the switch of a button, to save energy in slower dayparts but accommodate higher volume during peak periods.

Several other manufacturers offered similar ovens that occupied about a foot and a half square space on countertops.

“A lot of those ovens don’t require hoods,” Bender said, which he noted made designs more flexible and lowered the costs of restaurant finish-out.

“That creates a lot of flexibility for an operator,” he said. “That allows them to put new items on their menu or menu extensions that allows them to do more products. You are able to see dayparts that have their own menu.”

The countertop ovens were meeting their batch in countertop beverage dispensers that are coming to market.

Atlanta-based Coca-Cola Co., which debuted its customizing Freestyle in 2009, unveiled three new countertop-sized Freestyle dispensers at the NRA Show this year that will be piloted by the end of the year.

“People are amazed by the variety of choices and our customers see increased sales. Through a relentless focus on innovation, we are now able to provide a Coca-Cola Freestyle dispenser appropriate for the unique needs of customers while still giving the same great beverage experience,” said Jennifer Mann, Coca-Cola’s vice president and general manager for Freestyle.

The new dispenser line will offer two versions designed for medium-volume locations and can dispense 80 different beverage choices, as opposed to the larger original Freestyle that offered more than 100 choices. The third unit is designed for locations such as work break rooms or cafés, and provides more than 35 drink options.

The soft drink company in the past year has enhanced its social connections with a smartphone app that helps users find locations with Freestyle machines; memorizes favorite drinks; and allows users to log in with Facebook Connect, scan a Quick Response, or QR, code and fill their own Freestyle mixes. The customized mixes are being offered through June 27 at Firehouse Subs, Moe’s Southwest Grill, Noodles & Co., Qdoba and Wingstop.

Those social connections are also becoming an increasingly important part of point-of-sale and table-payment systems.

“They are really taking hold of the social media aspect of the end user, incorporating those into their products,” said Bender. “When you have point-of-sale companies taking into consideration how the end-user’s experience is changing helps connect all the things together.”

For example, Columbia, Md.-based Micros Systems Inc. in May debuted a new mTablet E-Series and a new Micros Engagement feature.

The traditional POS provider said the “newest Micros innovations allow staff members to perform multiple activities from one device, including making guest interactions extraordinary, while providing advanced capabilities that will significantly raise the bar on what a modern point-of-sale system should be.”

The mTablet E-Series, which is available in eight-inch and 11-inch sizes, offers an extended battery life, and operates on Microsoft Windows 8.1 Embedded Industry Pro. The larger size, the company said, could be used as a work station.

Micros also debuted its “Engagement” feature that adds an animated and interactive element to the Micros mTablet E-Series when running Micros Simphony. Interactive tiles can display display and promote numerous content such as specials of the day and upcoming events, connection to the loyalty program, external content feeds for guest entertainment, and the ability to take orders.

Russell Butler, Micros’ senior vice president of global research and development, said, “Mobility continues to be a consistent theme for technology in hospitality and retail. In food and beverage, it is not enough to be able to just take an order on a device at a table.

“The guests want to be able to interact with the technology as well,” Butler said.

The newest Ziosk devices include a camera, which allows users to take and post pictures to their Facebook accounts.

“Each post made from the Ziosk tablet will be tagged to the restaurant location and the guest will automatically be signed out of their account upon payment of the check,” the company said. In addition, Ziosk debuted a jukebox function that would give guests control over the restaurants’ playlists.

In addition, the newest generation of Ziosk allows customers to scan loyalty cards, coupons and gift cards on the device.

Based on Ziosk’s device usage research, more than half of customers in installed units use a credit card to pay directly through the table-based device, and 20 percent of customers provide post-dining survey feedback through the machine.

These new technological adaptations can enhance the customer and employee experience and allow restaurant operators to look deeper at the menu to entice new guests.

“That’s a real point of comparison now,” consultant Bender said. “These equipment manufacturers have to come up with solutions that work but the product is not sacrificed at all. We always say it starts with the menu.”